Knights buck up with pivotal third quarter on senior night 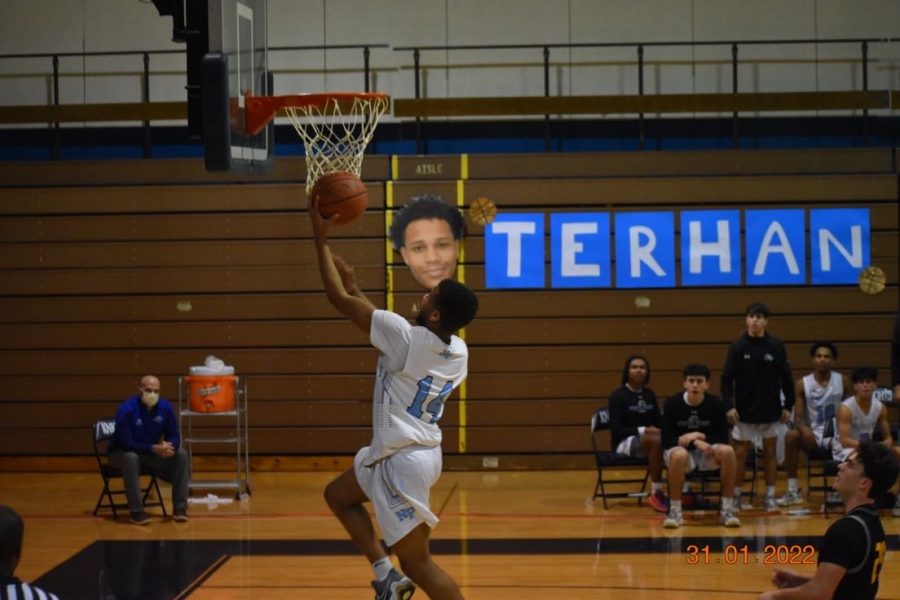 North Penn senior Joe Larkins scores a layup after stealing the ball from the Bucks during the boy's senior night game.

TOWAMENCIN- In high school sports, senior night is the one night dedicated just to the senior athletes, giving them the spotlight to show what they’re made of. For three North Penn seniors, they definitely made this a night to remember.

The North Penn Knights (7-5) defeated the Central Bucks West Buckshots (2-10) 60-57 in one of the most thrilling back and forth games this season. While it didn’t look promising for the Knights after the first half of the game with the Bucks holding a 13 point lead, after halftime, the Knights came back ready to take the lead.

“We’ve been down a couple of games and we just got to know the game is not over and keep playing,” junior Ryan Deininger stated.

Starting off the first quarter with the ball in the Bucks possession, all it took was a quick turnover for senior Joe Larkins to score the first two points of the game. The Bucks wasted no time to match the Knights’ intensity and came back to score a three. After Larkins scored, it was one senior after another. Both seniors Terhan Wright and Milind Pulugura each followed with two points. As the scoring went back and forth, keeping a very tight gap, the Bucks made two three-point shots in the last few minutes resulting in a six-point lead at the end of the first quarter with a score of 16-10.

“It was just a mental game and we just needed to pick up the energy and with all that energy, we would come back,” Pulugura emphasized.

Going into the second half of the game, the Bucks picked up their offense and started making major plays. With quick ball movement, the Bucks were able to score some threes and a few layups earning them a 16 point lead. While the Knights made the effort to put a stop to their scoring streak, the Bucks ended the first half leading 30-17.

“Defensively we had a lot of breakdowns, offensively we weren’t sharing the basketball. We were trying to do too much one on one, but I thought our seniors did a really nice job leading us in the third quarter, Milind, Joey, and Terhan,” head coach John Conrad explained.

After half-time warming up before the quarter started, the Knights had a different type of energy. Within the first minute of the quarter, Deininger got the ball and made a pivotal three. To keep the offense going, just 45 seconds after, Pulugura shot a flawless three giving the Knights some hope. Little did everyone know, this was going to be the first of many. Pulugura got fouled, then not only made both foul shots but shortly after made another three. With the ball in the Bucks’ possession, junior Ryan Zeltt made a significant block taking a shot away from them, and just seconds after, he stole the ball giving the Knights a breakaway giving Larkins the opportunity to score a layup.

“We started off slow and we were confident in ourselves, that we came out with more energy and that energy on defense aside just boosted us,” Zeltt stated.

With the Bucks still holding a lead over the Knights, Pulugura took it into his own hands to score three more threes. With 0.07 seconds left in the third quarter, Zeltt made his own three, giving North Penn their first lead of the night, 44-39.

“It felt good and it was all from the help of my teammates, like helping me get open and getting me the passes. I couldn’t have done it without them,” Pulugura said.

With the Knights back in the game, even taking the lead, the fourth quarter was filled with suspense. The Knights continued to hold their lead until the Bucks scored a three with three minutes left, tying up the score 51-51. The back and forth continued as Deininger made a two-point jump shot, followed by a Bucks layup tying up the score again 53-53. After a Bucks foul, Larkins went to the line making 1 of 2 shots going up one on the Bucks. A lack in the Knight defense gave the Bucks the opportunity to score a layup giving them a one-point lead.

With a little over a minute on the clock, Zeltt stole the ball, scoring and giving the Knights back their lead.

“Our energy started with defense and as defense turned to offense, I think we got into the tempo that we wanted to play in,” Larkins explained.

With 24.2 seconds left on the clock, Pulugura was fouled, making both shots to take a three-point lead forcing the Bucks to call a time-out.

The timeout worked in the Bucks’ favor helping them to score a layup making the score 58-57 in favor of the Knights. The Knights called a timeout with 13.4 seconds left. Down by one, the Bucks were forced to foul putting Pulugura on the line. Making both shots, the Knights went up  60-57 on the Bucks. With the ball in the Bucks’ hands, they shot a three and missed with time expiring giving the Knights the hard-fought victory.

“I’ll always remember this game because it’s senior night and we came out on top so it will be a special memory,” Pulugura exclaimed.

This wasn’t any regular victory for the Knights, it was one led by their three seniors, Pulugura, Wright, and Larkins, who have put in the work and dedication over their years of contributing to this team.

“I’m very happy for the boys. It feels great. These guys are a great group of guys and I’m going to miss them tremendously,” Conrad said.

The Knights are back on the court at home Tuesday, February 1, at 7 against Pennridge.