Marissa Leibowitz takes a look at Week 2 of the NFL playoffs, as 8 teams vie to advance to the conference championship games. 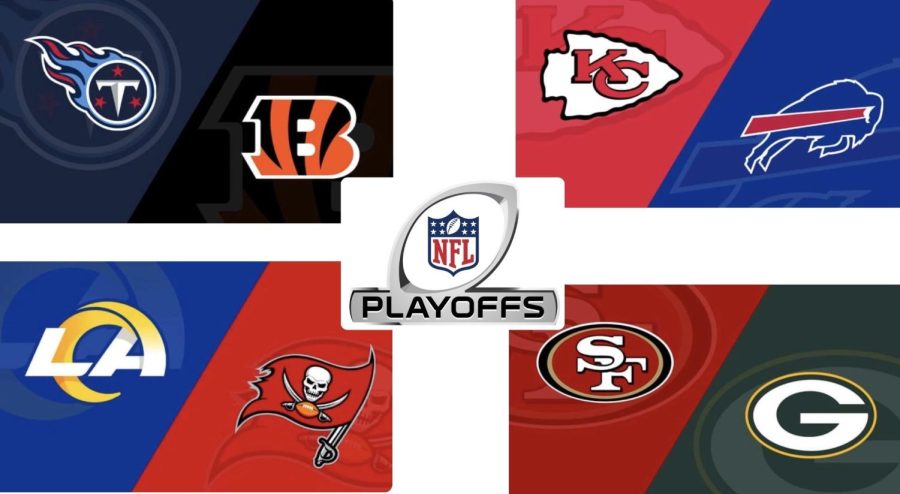 8 teams left with the same goal: the Lombardi Trophy. The Wild Card games ended the way most fans predicted and now the strongest teams are left and it is anyone’s game. These are my picks for Week 2 of the NFL playoffs and why my picks will win.

Who will win: Bills

History: A familiar matchup in the playoffs between the Bills and Chiefs. In the 2021 AFC Championship, the Chiefs beat the Bills 38-24. The Bills beat the Chiefs 38-20 earlier in the season, but this was Week 5 when the Chiefs hadn’t figured out how to win yet. Both teams dominated their wildcard weekend matchup with the Bills winning 47-17 against the Patriots and the Chiefs beating the Steelers 42-21.

Why the Bills will win: I think the Bills will win because of many reasons but especially Josh Allen. With the impressive performance he put on last week with 308 passing yards and 5 touchdowns, he looked unstoppable. The momentum from last week and his versatility are what will make him such a threat against the average Chiefs defense that has allowed the 25th most passing yards a game this season. He’s a threat by foot and through the air. His supporting offensive line that hasn’t let up a sack in 5 games and the impressive offensive weapons of Stefon Diggs and Devin Singletary will only add to Allens success.

Who will win: Titans

History: The teams haven’t played each other since 2020, where the Bengals won 31-20. The Titans had the #1 seed resulting in the bye for the Wild Card games. The Bengals played the Raiders winning barely 26-19 breaking their 23-year playoff win drought and the Titans to end their 23-year Super Bowl drought.

Why the Titans will win: 2 words: Derrick Henry. He’s back just in time for the playoffs. He will not carry the offense on his back, but he will add to the already very successful offense, especially the running game. With D’onta Foreman holding down the fort while Henry was injured, the addition of him will only add to the success. I also think having him around the team will help the intensity on the sideline as he played a big role early in the season. Before Henry got hurt he was averaging 117.13 rushing yards a game in 8 games. He most likely won’t play all of the snaps but the addition of him will help the Titans beat a young and competitive Bengals team and take them a step closer to ending their Super Bowl drought.

Who will win: Buccaneers

History: The teams played in a Week 3 matchup resulting in a 34-24 win for the Rams. Both quarterbacks, Matt Stafford and Tom Brady played incredibly well in that matchup. The Buccaneers beat the Eagles last weekend 31-15 and The Rams outscored the Cardinals 34-11. Both teams are strong on both sides of the ball and this seems to be anyone’s game.

Why the Buccaneers will win: For the Bucs, I think a few things will contribute to their win but the experience is what will help them pull ahead. Tom Brady has more playoff experience than anyone else in NFL history and also has the most playoff and Superbowl wins. The Bucs also won the Superbowl last year, so this is nothing new for them. In the offseason, the Bucs signed almost every free agent that was on the super bowl winning team. This team is no stranger to competitive games and playoff competition and with a leader like Tom Brady, it is unlikely the Rams will come out on top.

Who will win: Packers

History: These teams met in Week 3 resulting in a slim 30-28 Packers win. The 49ers are coming off upsetting the Cowboys 23-17 while the Packers are coming off a first-round bye. I don’t think the 49ers underdog mentality going into this game will help them against this Packers team.

Why the Packers will win: The Packers have an incredible quarterback in Aaron Rodgers and even after all the controversy he has caused this season, I believe  he will lead this team to the next round. Rodgers has no problem keeping his calm in intense situations especially late in the game. The Packers won 5 of their regular season games by only one score which shows they are really never out of a game. Rodgers has plenty of offensive weapons to go around including Davate Adams who had more regular season yards this season than any other year of his career. If this offense performs as well as they have all season I have no doubt they will not beat the 49ers.