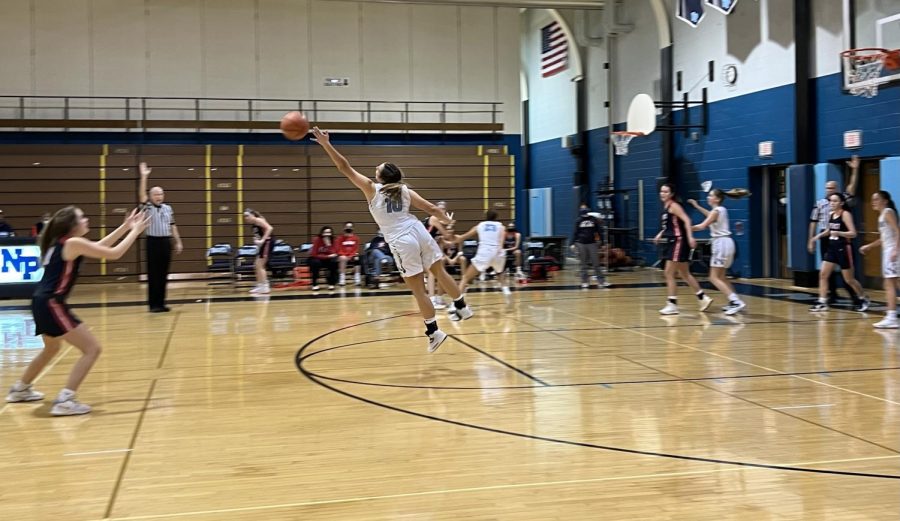 Monday night’s victory was not just a big conference win for the young Knights team; it has been all the little victories that have led up to it that made this moment so much more special.

A back and forth first quarter started out promising for the North Penn offense with Junior Captain Abby Plaugher scoring right out of the gate.

“Abby came in and just absolutely showed she is a leader and uses her experience to take control,” Head Coach Bri Cullen said.

The game stayed close due to consistent defensive efforts from both teams, but the momentum changed with about 2 minutes left in the first quarter. After a few fouls and a big steal, East was up 13-5 on the Knights heading into the second quarter.

The second quarter started with three fouls in the first minute giving both teams opportunities to score and giving East a lead of 15-7. North Penn’s defense began to shine through after a big block from Sophomore Captain Liv Stone, allowing her to take possession and score the ball. The scoring continued for the Knights with big shots from sophomore Caleigh Sperling and freshman Leah Mikulski.

“We had people contribute up and down our lineup,” Plaugher explained.

A big three from Sperling put the Knights within 2 points of the Patriots. A pair scored by both East and Plaugher made the score 20-18 with 2:40 left in the half. It did not take long for East to gain their first-quarter momentum back as they went on to score back-to-back threes, putting them up 26-18 with about a minute left in the first half. Sperling helped the Knights inch closer by scoring off of an offensive rebound to take the game into halftime with a score of 26-20.

Half time is where it would all change for the Knights.

“We had a conversation that if we want to come out on top and we want to win a game, we need to take a step forward and learn from our past,” Cullen said. “The only way to win is to score.”

And scoring is exactly what the Knights rallied together and did.

Within the first two minutes of the second half, Stone and Sperling combined for 7 unanswered points resulting in the Knight’s first lead since five and a half minutes into the first quarter. Sperling showed both her offensive and defensive skill with a defensive rebound and a drive down the court resulting in another 2 points for her. 10 of Sperling’s 21 points came out of the third quarter alone.

“Caleigh came up really big for us tonight,” Cullen said.

“I think Caleigh Sperling played really well for us. She made big shots and scored a lot for us,” Plaugher added.

Freshman Cam Crowley added a pair for North Penn making the score 32-27 in favor of North Penn. East answered by scoring a three attempting to take the lead back, but the Knights kept scoring. Two free throws by Sperling and a big three added on by Sophomore Kelly Donnelly gave the Knights a 37-30 lead. Plaugher would then add another three to the score to be answered by a pair of two’s from East to close out the third quarter with a score of 40-34 in favor of the Knights.

The fourth quarter opened up with a North Penn foul resulting in a point for the Patriots, but not followed long after by a three from Stone with rebounding help and a score from Plaugher to extend the lead 45-37. Making their way back in the game yet again was the Patriots scoring a big three and being fouled on the play as well making the score 45-41. East then scored another three coming within one of the Knights forcing them to call a timeout.

Out of the timeout, East went on to score a pair putting them ahead of the Knights 46-45. Sperling quickly answered with a pair herself putting the Knights up by one. A North Penn foul resulted in points for East taking the lead back once again, making the score 48-47. 48 points would be the end of scoring for the Patriots as Plaugher led the Knights to victory scoring a pair and one putting them ahead. Crowley and Plaugher both scored a pair of foul shots sealing the game for the Knights.

“Cam Crowley stepped up in the fourth quarter and made big free throws as a freshman,” Plaugher said.

The Knights fought till the last minute to secure their first home win of the season.

“For the most part, we have been in every single game and when we work together as a team and play well together and have other people step up we can beat good teams and finish games,” Plaugher said.

“I think we really showed composure. We are a young team and we took a big step forward tonight,” Cullen said.

The Knights take on Neshaminy away Tuesday at 7 pm looking to make even more progress as the young team they are.