Grace Macnamara learns the real meaning: no pain, no gain 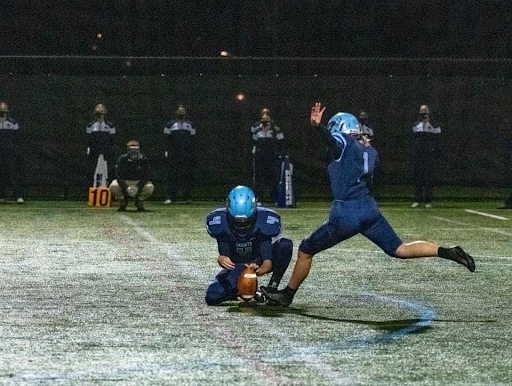 Grace Macnamara being setup for a clean sweep.

Grace Macnamara is finding a way to snap back from her recovery as North Penn’s season is coming to an end and the team is hustling their way into the playoffs.

Macnamara’s injury happened over time and continued to get worse as she kicked. She suffered through a displaced avulsion fracture of the left ilium. In other words, Macnamara’s growth plate was separating from her hip. For the first couple of weeks, she felt a lot of pain but that pain eventually became uncomfortable more than anything.

“I stepped weird one day and the pain wasn’t that bad because it eventually went away, but as I kept kicking the pain got worse. One day I did a kickoff and it popped, which is when I knew it was going to be really bad,” Macnamara explained.

After a long recovery process, Macnamara is finally cleared to play as long as she is not going through any pain. She has been resting and going to physical therapy two to three times a week. Since the hip flexor is stronger than the other muscles surrounding it, the hip flexor is being left out of her exercises so that the other muscles will get strengthened. Macnamara hopes to return to the field in a couple of weeks by taking time to heal and slowly get back into her hardcore routine so that she can become fully recovered.

“It was definitely really hard because it sucks just standing on the sidelines, not being able to do anything. Injuries are a lot mentally and it’s hard to get back to where you were,” Macnamara stated.

With not being able to contribute on the field, Macnamara still found a way to help out her team to rise to victory. The current kickers do not have as much experience on the field that Macnamara has. She has been trying to help them out as much as possible by giving them different tips and tricks to become successful. Before the injury, the kicker was able to kick up to 45 yards, but wants to increase that number to get the kickoff into the endzone, which would be about 60 yards. Macnamara is really supportive of her teammates and is expecting to train a lot in the off-season for another undefeated year.

“It’s really fun. The team is so nice to me. They include me really well and they’re not weird to me or anything. I love it,” Macnamara expresses.

It is not common to see a girl play football, but Macnamara loves the experience of being the only girl on the team. Being injured has opened more opportunities for her to meet new people and grow better relationships with her teammates and other injured players. As much as she hated not being able to play, she is still glad that she got to be a part of the team.

“It all takes time. I think we will do good in the playoffs. A lot of it has been mental mistakes that hurt us more than anything. If we clean that up and continue to work hard, I think we will make it far,” Macnamara insisted.