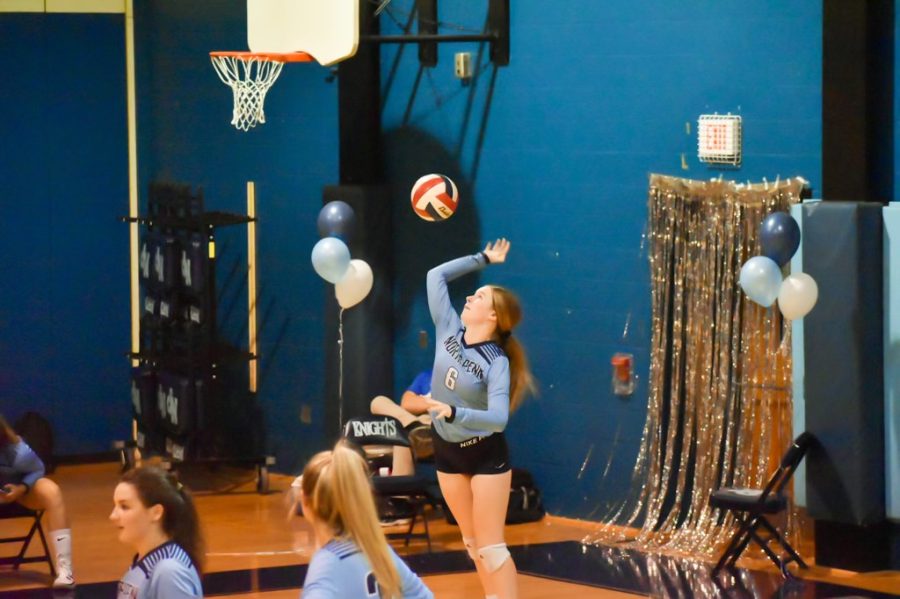 TOWAMENCIN – All eyes were on North Penn’s senior volleyball players as they crossed the floor in recognition of their time with the team. When the ceremony ended, the crowd’s eyes remained glued on the seniors as they watched them win all three sets on Senior Night.

North Penn’s energy launched them to an early 7-1 lead in the first set. The effort from all team members was obvious; the girls played with energy and focus. Scoring North Penn’s ninth point of the game with a spike was senior Kate Hanley. The majority of the first set was served by senior Emily Yun, and the Knights racked up a total of 17 points. A slight back-and-forth battle gave the Pioneers some opportunities to score, but ultimately, the Knights prevailed, winning the first set 25-15.

“We played really well. Charlotte did a great job of mixing it up and giving everyone a chance to hit, even girls who are normally defensive players. I think everyone on the team had a kill and an ace. It was a really good team effort, and all around everyone just worked together,” Brunt stated.

Senior captain Charlotte Patterson began the second set by serving for the Knights. North Penn carried their energy over from the first set to the second, as they held another 7-1 lead over the Pioneers. A lengthy volley ended with an assist from Patterson and a spike from Hanley. This wasn’t just any assist for Patterson, though, as this memorable moment was actually Patterson’s 1000th assist in her high school career.

“I was really shocked because we were told that we didn’t know our career stats, so I just thought I would never reach it because we never knew our stats, but luckily my coach went back through our old recordings of games, and she took our stats from games from a while ago, which must’ve taken a really long time. So, that was really generous of her to do that, and without her, that wouldn’t have been possible, and I was really shocked,” Patterson said.

North Penn continued their dominance of the Pioneers in the third set. Only a couple of minutes into the game, the Knights led the Pioneers 9-6, and the set progressed rather quickly. The Knights eventually increased their lead over the Pioneers to 15-7. The third set concluded with a 25-8 score, with North Penn once again emerging victorious.

North Penn’s next match will be home against Central Bucks West on Tuesday at 7:00.