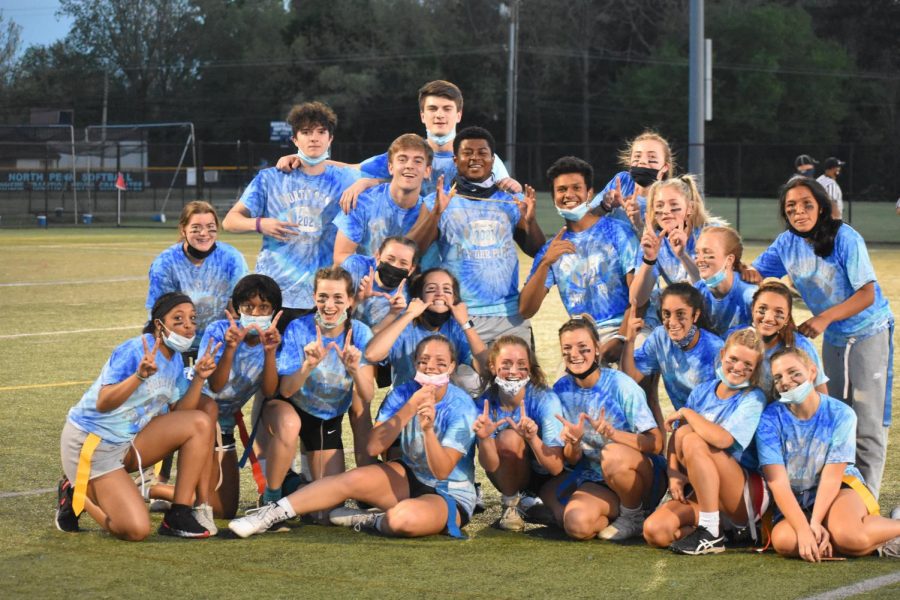 TOWAMENCIN-10 seconds left and leading 13-6. Coach DJ Fisher makes a couple last second adjustments to his defense. The potential game winning pass was swatted down, and the seniors walked away Powder Puff champions.

“That was so fun,” Fisher said. “It was great to be a part of and I’m glad we won the whole thing.”

The night started with sophomores and juniors playing for the right to go up against the seniors. The Juniors took a 15-0 first half lead, with touchdowns from Bella Koch and Haley Decker. The second half was a completely different game. The sophomores rallied behind Sydni Schorn’s multiple touchdown runs to close the gap and take the lead.

“There was literally no answer for her,” junior coach Tyler Beam said. “We couldn’t do anything about it and our players couldn’t stop her.”

A 24-21 lead late in the second half for the sophomores was enough as the juniors got shut down on their final drive, and couldn’t make a comeback of their own. Later in the evening, the sophomores took on the seniors in the championship. A far lower scoring game had excitement of its own.

The scoring opened up as early Schorn broke a long touchdown run to go up 6-0. The defense was being shown as well, as Lily Szilagyi made an interception, but it was called back due to too many players being on the field. The defense for the sophomores was holding strong, and with 4 minutes left the seniors were scoreless. Alli Lindsay threw a pass that was tipped and then caught by Rachel Strobel to tie the game.

“That just was not how we drew it up, but we’ll take it,” Fisher said. “Sometimes the best plays are accidents, you know.”

A very quick defensive stand set up the seniors to drive back down the field. In the last minute, a pass to Kaelan Daly in the back of the endzone proved to be the game winner for the seniors by a final score of 13-6.

“Honestly, it was just so much fun tonight,” senior Casey Brennan said. “Winning this, obviously as a senior, is really cool since it was our last shot…just a great feeling.”