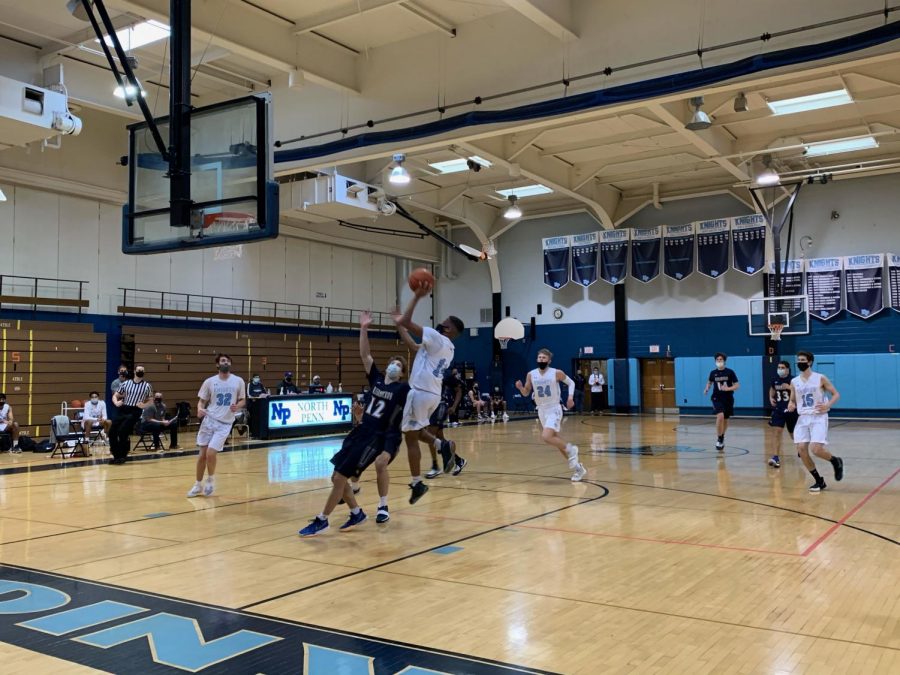 Junior Joey Larkins drives hard into the lane in transition for a quick 2.

TOWAMENCIN – Defense wins games. North Penn proved this statement by allowing just six points in the fourth quarter and downing Wissahickon 67-50. A multitude of steals by Sophomore Mario Sgro accompanied with interior defense by Sophomore Ryan Zelt, and Josh Jones providing the spark for the Knights.

“Our ability to do a better job defending, communicating and rebounding was big,” said coach John Conrad. “They had a lot in that third quarter off putbacks, so rebounding was a huge part.”

The game opened up at a quick pace as Zelt was able to lay one up in the opening seconds. After each team traded turnovers, Senior Billy Coley was able to drive baseline and use a reverse layup to get the Knight’s second field goal. Junior Josh Twersky was able to take the lid off the rim for the Trojans, finding the bottom of the net coming off a great assist by Senior Matt Compas. The Knights then streaked on an 8-2 run with the help of two Sgro steals and layups, followed by a Zelt bucket that made the score 8-4. The Trojans picked it up and answered with a free throw and a layup by Sophomore Earl Stout to cut the deficit to two. The Knights once again put together a run that saw a jumper by Senior Joey Larkins and Jones convert an and-one opportunity. Coley hit a three in the closing seconds to make the score 20-12 heading into the second quarter.

The Knights picked it up defensively in this quarter by forcing steals and crashing the boards. A free throw by Sgro extended the run to 9-2 run by the Knights to open the quarter. The run saw a layup and three-pointer by Jones, which was immediately followed by a forced turnover which resulted in a layup by Sophomore Terhan Wright. A three and mid-range jumper by Senior Jackson Intrieri was able to cool down the Knights momentarily. Larkin and Compas traded buckets. But soon after, a traveling violation gave the ball back to the Knights. After a missed Jones opportunity Coley was able to grab two straight offensive rebounds and get the layin to stretch the lead to 14. Stout was able to get another floater to go at the end of the half to make the score 37-23 heading into the break.

“This team is all about defense first,” said Joey Larkins. “ We know that defense and turnover will lead to points. We worked on it in practice and was able to execute today.”

The third quarter proved to be a test for the Knights as the Trojans came out firing on all cylinders. A Twersky layup opened up scoring in the quarter. A Larkin three-pointer was answered immediately by another Twerksky lay in. After a pair of Jones free throws, Twersky was once again able to find the bottom of the net from close range. A Stout three-ball and layup by Senior Stefan Lowry cut the lead to single digits and was enough for a Knights timeout. Immediately out of the timeout, Coley was able to drain a three. Lowry answered back with a bucket of his own and Jones hit a pair at the charity stripe. Once again a small run by the Trojans that featured Lowry and Senior Will Kunzier, was able to cut the lead to single digits. Another Coley three was able to stop the bleeding but a Kunzier layup off a great acrobatic pass by Compas cut the lead to 54-44 going into the final quarter.

The Knights defense was superb coming down the stretch. Great rotation and quick feet led to blocks and forced turnovers all over. Completing the entirety of the fourth on a 13-6 run. A Larkin jumper started the scoring for the Knights and they never looked back. A Jones Steal and layup stretched the lead even further. Once again defense was the theme, as Jones was able to chase down Compas and block his shot off of the backboard. Zelt grabbed the board and ran in transition, which led to him splitting a pair of free throws. The Trojans found themselves in foul trouble and sent Jones to the line on four straight possessions where he converted six out of the eight attempts. Compass was able to sink a pair at the line that was answered by a layup by Junior Milind Pulugura. Another Compass layup was all Wissahickon could manage as the Knights were able to dribble out the clock and secure their ninth win of the season.

Jones led the way with 26 points and an electric performance defensively by Sgro that saw him rip off 3 steals.

“They were definitely a good team,” said coach Conrad. “We have a great test on Wednesday and then we face Upper Dublin, so hopefully we stay focused and get better.”

The Knights (9-4) host Pennsbury on Wednesday and the Trojans (10-7) will try to bounce back against Bensalem on Thursday.