Knights Eaton up opponents on the ground 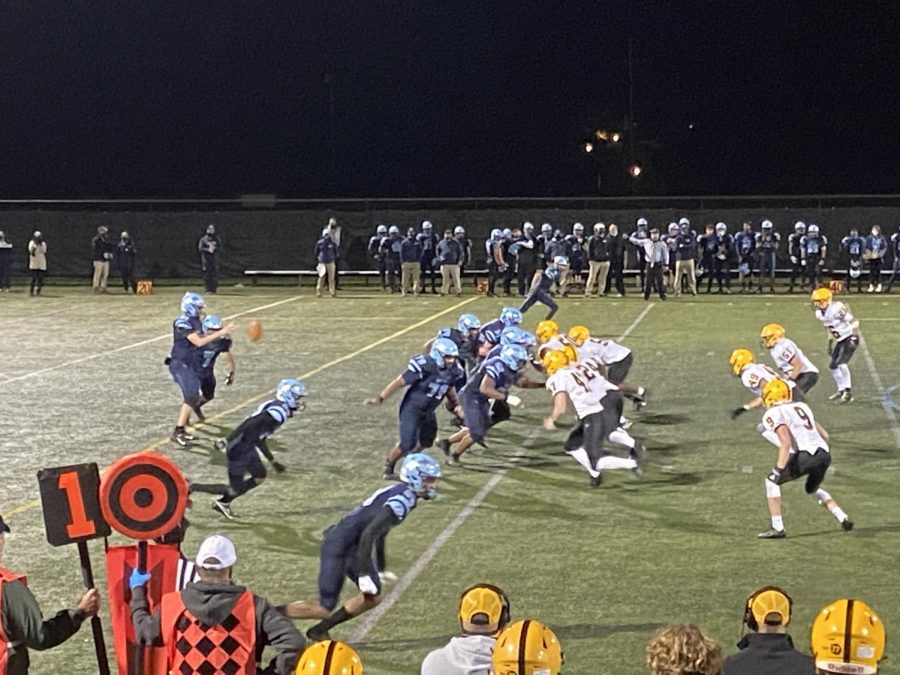 North Penn takes on CB West on Friday, October 16 at NPHS. The Knights had little trouble with the Bucks under the Friday night lights.

TOWAMENCIN- After a dominating performance last week against Pennsbury, North Penn was eager to continue that momentum into this week. In their second straight home game on the turf, the Knights were able to do just that.

North Penn (2-1) defeated Central Bucks West (0-3) 53-28. The offense was firing on all cylinders, scoring in less than 5 minute on the majority of their drives. The defense was able to make stops when they had to, putting the game to rest relatively early.

The game did not start out well for the Knights, as the Bucks returned the opening kickoff 74 yards to the house to go up 7-0 early. The opening offensive drive looked to be promising, with quarterback Ryan Zeltt making some great throws. However, the drive ended with Zeltt throwing an unfortunate interception, a result of a great defensive play.

On the Bucks first offensive drive, they were able to run the ball very well. That was until the Knights made a great defensive play, forcing a fumble recovered by John Derkits. This seemed to light a fire under the team, as the offense was able to get the ball rolling. Zeltt found tight end Maliq Staten for a 32 yard touchdown on the drive’s early play. After the missed PAT, CB West still led 7-6.

The Knights defense could not seem to find an answer for the run game, but still made very nice plays on 3rd and 4th down to force a turnover on downs. Khalani Eaton stole the show on the Knights third drive, another short drive lasting only 4 plays, rushing 3 times for 54 yards and a touchdown. This time the point after was good, putting the Knights up 13-7.

The defense started to look better, as they were able to start stuffing some run plays. After the Bucks were able to convert a 3rd and long, the defense really stepped up by forcing a top on third down, forcing a punt. On North Penn’s ensuing drive, Ryan Zeltt threw yet another strike to wide receiver Jalen Edwards for 50 yards. Eaton then carried the ball the next two plays, recording 20 yards and another touchdown. The extra point was no good, putting North Penn up 19-7.

North Penn still could not seem to counter the run game after showing promise on the previous drive, allowing the Bucks to drive down the field with ease. This culminated in a 4 yard touchdown run, narrowing the lead to 19-14 after the made point after. The offense continued to be hot, with a well designed screen pass caught by Eaton that went for 20 yards. He then had a rush for 29 yards, setting the Knights up in the red zone. The drive was capped off by an Ethan Spann 15 yard touchdown, putting North Penn up 25-14 after the 2pt attempt was not converted. This would be the score the two teams went into the locker rooms with.

North Penn started off the second half quick, with a two play drive resulting in Staten catching his 2nd touchdown of the night. This extended the lead to 32-14 after the converted extra point. The defense then forced the second fumble of the game, this one also being recovered by John Derkits.

Eaton started North Penn’s next drive off but Ethan Spann finished it, scoring a 3 yard touchdown, his second of the game. The extra point was good, widening the lead to 39-14. The Bucks were still able to dominate North Penn’s defense, driving down the field and scoring a touchdown, making the lead a bit smaller at 39-21.

Eaton once again dominated on the ground, with 2 rushes for 57 yards and a touchdown, his third of the game. North Penn led 46-21 after the made PAT. CB West had a huge play putting them in the red zone. The next play put them in the end zone, but it was too little too late, as these would be their last points. This PAT was good as well, bringing the score to 46-28.

Eaton was again the focal point of the drive, with 4 rushes for 51 yards and his 4th touchdown of the night. The PAT was good, solidifying the final score at 53-28.

“When you have Khalani in the backfield it makes it easier to run, but we want to have more of a balance as well. We can’t have just one or the other,” Head Coach Dick Beck said of the team’s gameplan.

North Penn plays away next week against a tough opponent in CB East on Saturday at 1pm. The Patriots are 1-1 on the season, and North Penn will be looking to keep their offense hot and tighten up the defense.