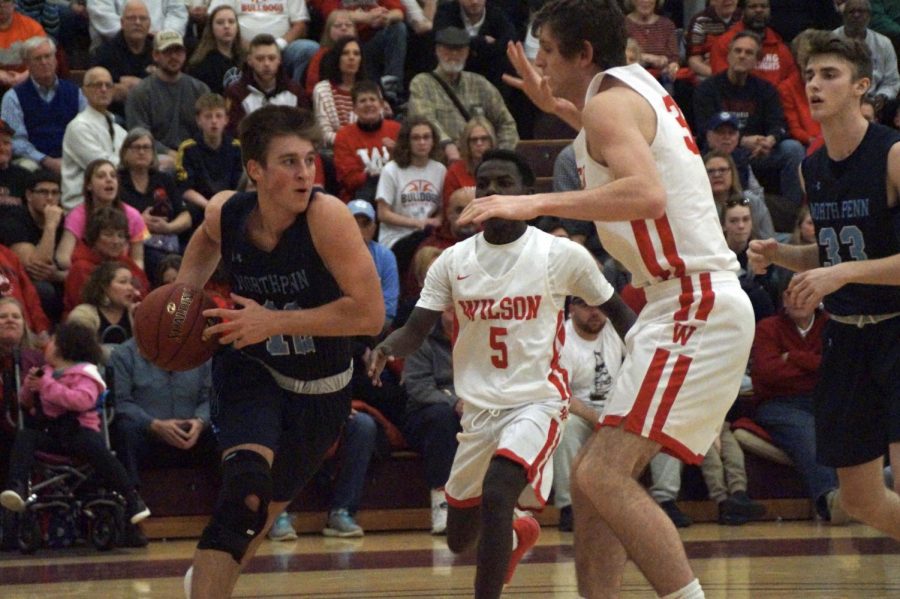 6th Man: Kolby Barrow drives baseline and kicks it out to a teammate. The Knights 6th man had 9 points.

KUTZTOWN- The Knights have been a cinderella story all year, but midnight eventually catches up to cinderella.

The game started off back and forth as Wilson’s star player, Stevie Mitchell, got the first points of the game with a layup.  Rob Carangi tied the game up on the other end but Evin Timochenko retook the lead for the Bulldogs.  Matt Swanson responded with a bucket to tie the game at 4.  With 5:35 left in the first quarter Makel Huffman made a deep 2-point jumper and the Bulldogs went up 6-4.  The Bulldogs took a 15-7 lead into the 2nd quarter.  The Knights caught up and after Kolby Barrow passed to Josh Jones for a layup that led to an and one free throw, the Knights were within one possession 15-13.  They could not take the lead however and trailed at halftime 19-18.

“I feel like a broken record saying it but it comes down to our seniors and their character and their leadership,” Head Coach John Conrad said on the Knights ability to come back from deficits.

The Bulldogs came out of the locker room strong as they went on a 10-2 run in the first 2 minutes and 41 seconds of the second half to gain a 29-20 lead.  Then it was the Knights turn as they went on a 9-4 run to close out the quarter and the score was 33-29 heading into the final quarter.  Mitchell for the most part was limited in his scoring ability as the Knights filled in the driving lanes nicely along with some strong defense from Mike Chaffee, who guarded Mitchell the entire game.

“We watched film so during film, I paid close attention and I found the strengths and weaknesses and I planned to exploit them in the game.  I feel like I did a great job.  Played off [Mitchell], he’s not a great shooter, but he gets in the lane tremendously and I guarded that to the best of my ability and restricted his jump shot,” Chaffee explained.

Josh Jones got the deficit to one point with 5:34 left in the game as he made a three and the score was 33-32.  But after two turnovers leading to a 7-0 run with a little over 2 minutes left in the game, the Bulldogs were in the driving seat 43-32 as the Knights season came to an end.

“All the kids really played well.  We were within one possession with four minutes to go and we just unfortunately had an untimely turnover and that was the spark they needed,” Coach Conrad said.

It was a pretty special season for the boys basketball team.  After a loss on January 17th, the Knights were 4-10 and the district playoffs looked like a stretch for the team to get to, but after a big turnaround and two buzzer beaters, that if missed would have meant the end of the season, the Knights became the first 24th seeded team to make state playoffs.

“We’ve talked to the guys all year about good things happen to good people that work hard and that’s who they are.  They are good kids… and they work hard,” Coach Conrad said holding back tears as the 2019-20 season signs off.