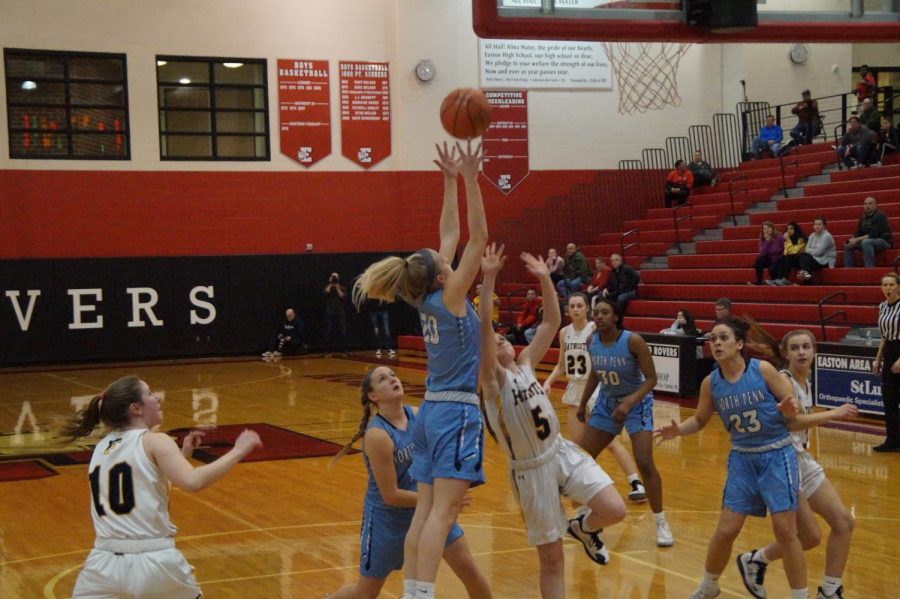 Crashing the Boards- Senior captain Alaina Mullaly hauls in a rebound for the Knights.

EASTON- The result of the game would have been completely different if it wasn’t for the first 4 minutes and 52 seconds of the game.

And the game all came back to the first 4 minutes and 52 seconds.  Freedom opened the game with a 10-0 run to gain major momentum and put the Knights in a tough spot early.

“It comes down to that first quarter where we dug ourselves into a ten-point hole and we were playing from behind the whole game.  We’ve talked about that at times during the season.  We’ve been able to do that and with an experienced team, sometimes you get away with that, but we really have tried to impress upon them that at this level you can’t get away with it and ninety-nine percent of the time, it’s going to windup hurting you, and tonight it did,” Head Coach Carangi said.

Freedom rode that early lead all the way through to the final buzzer.  They took a 15-2 lead into second quarter.  Shots started to fall in the second quarter with the quarter score was 15-15, as Freedom carried the same 13-point lead into halftime.  In the end, the Knights just could not overcome the double digit lead.

“I think in the beginning, there was a lot of nerves.  I said to the assistants on the way here, I felt like ever since last week, last Friday night when we played, it’s that nervousness for the seniors, we have a very senior heavy team, so for them it was the fact that the season will be ending with our next loss.  I felt like that really weighed heavily on them and we tried to keep it light at practice this week and I felt like the beginning, the first few minutes, it was just nerves,” Coach Carangi said.

The season for the girls basketball squad comes to an end and even though the ultimate goal of a state championship wasn’t accomplished, it was still a successful season.  After two years of rebuilding and losing records, including only one playoff game, the Knights made it all the way to state tournament marking a turn towards success compared to the last two years.

“I’m so proud of them.  I just said to them that this is the kind of thing where at the end of states, there’s only one team that’s happy and that’s the team that wins the state championship.  There’s thirty-one other teams that their season ends with them being unhappy.  So kind of putting that aside, I’m just so proud of them and just everything they have done, how hard they’ve worked.  Not much changed between last year and this year and you saw our team was a totally different team.  So I’m grateful for them, we’re going to miss them terribly, but they’ve set the example and hopefully they now established the bar that we hope all North Penn teams aspire to reach,” Coach Carangi said.