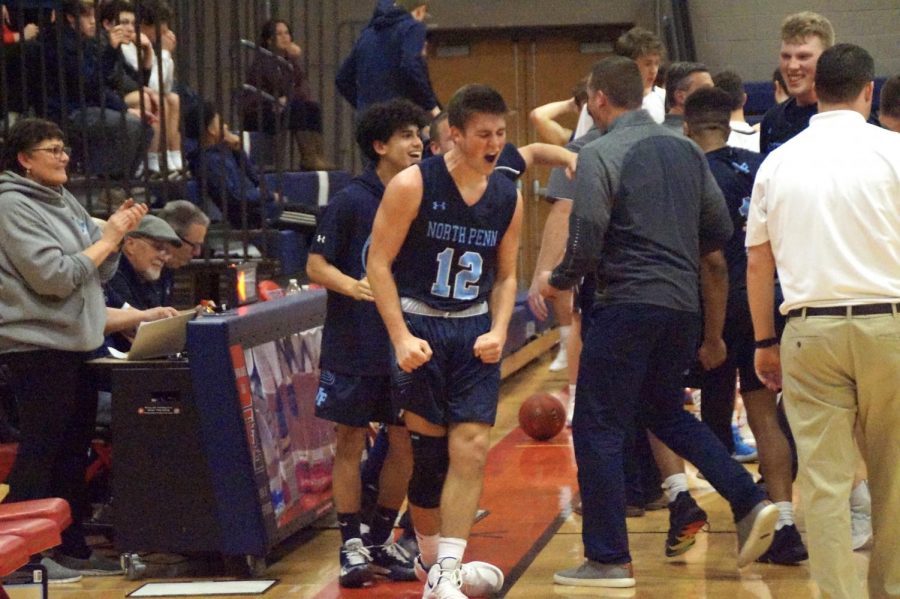 DOYLESTOWN- Kolby Barrow had not scored a single point with 6.1 seconds left in the game.  But, he ended up with the biggest three points of the game, season, and perhaps history of the North Penn boys basketball program.

The North Penn Knights (12-14) beat the Central Bucks East Patriots (15-11) 46-43 in the second round of playbacks to qualify for state playoffs.  North Penn is the first 24th seed to make the state playoffs since the 24-team district playoff format.

“It’s exciting, it’s rewarding.  I told the guys before the game that we were four and ten and that’s a tribute to our seniors because they continued to work and they got us here,” Head Coach John Conrad said with all smiles postgame.

And it came down to some late game heroics off the hand of Barrow who sent the Knights to the state bracket with a buzzer beater three-pointer.

“It’s just awesome, just excitement running through your body and I’m proud of the team.  The way the season’s gone, we kinda started off slow and we just keep getting better and keep getting stronger,” Barrow stated.

With 6:49 left in the first quarter, Josh Jones put up the first points of the game with a layup.  He was fouled in the process and made his free throw to give the Knights a 3-0 lead.  Chris Charlton tied the game up at 7 with a three.  The Patriots then took the lead with 3:52 left in the quarter as Tyler Young scored a basket in the paint to give the Patriots a 9-7 lead.  Jones tied the game back up with 2 free throws as he had 7 points in the first quarter.  Charlton hit another three to reclaim the lead for East, 12-9, with 2:52 left in the opening quarter.  At the end of the first, East led 14-11.

With 7:01 left in the first half, Jones drove to the basket and kicked it out to Joe Larkins, who made a three to tie the game at 14.  Joe Jackman responded two minutes later with a deep three-pointer to give the Patriots a 17-14 lead.  With 1:21 left in the half, the back and forth action continued as Rob Carangi scored, off an assist from Larkins, to give North Penn a 21-20 lead.  With about 3 seconds left, Young made a three to send the game into halftime with the score at 23-22 in favor of the Patriots.

Jones made two frees throws with 7:36 left in the third quarter to give the Knights a 24-23 lead.  Then Jason Markowitz stepped up in a big way, as after North Penn built up a lead, Markowitz tore it down with three three-pointers, including one to give the Patriots the lead 34-33.

The 4th quarter really came down to just over a minute left in the game.  With 1:13 in the 4th, Carangi scored off an assist from Larkins to bring the game to within one possession, 43-41.  Fast forward to 28 seconds left in the game, and Larkins found Jones for a layup after a couple offensive boards, and the game was tied at 43.  With 6.1 seconds left on the clock, Matt Swanson came up clutch on the defensive end as he drew a charge from Jack Hamilton to give the Knights possession.

“I saw that he beat Rob and I was just looking to make the smart play.  I knew I was giving up the dish to the corner but just wanted to make a play on it and luckily I got my feet settled down and took a clean charge and that was huge for us,” Swanson explained.

The Knights called timeout and discussed their game winning play.  Then, every little kid’s dream became reality.  Time winding down, Joe Larkins dribbled down the court, eyes looking at Carangi running in front him.  Larkins stopped and with an immediate turn to his left, passed the ball to the senior Barrow.  Barrow caught it, stopped and planted with both feet about 2 feet behind the three-point line as Hamilton closed out on the shot.  Barrow got the shot off from the top of the arc and held the follow through as he has done so many times in navy and Columbia Blue.  And it was nothing but net as the Knights and student section celebrated a state playoff birth.

“It was meant to go to Josh or someone deep but they had too many people, so I just moved to Joey and they doubled him.  So then he kicked it back out to me and just a big shot,” Barrow explained.

Barrow also plays football and baseball at North Penn, so there a lot of big moments in his athletic career for the Knights, but this one he said, was the best.

“This is definitely the top one for sure, one-hundred percent.  I won’t forget it so it’s awesome,” Barrow said with a smile on his face that said it all.

The Knights will now travel to Garnet Valley Friday to compete for higher seeding in the state bracket.

“Just keep doing what we do, rely on our seniors.  We’ll work hard and see what happens,” Coach Conrad said.