Knights eliminated from districts by Bucks 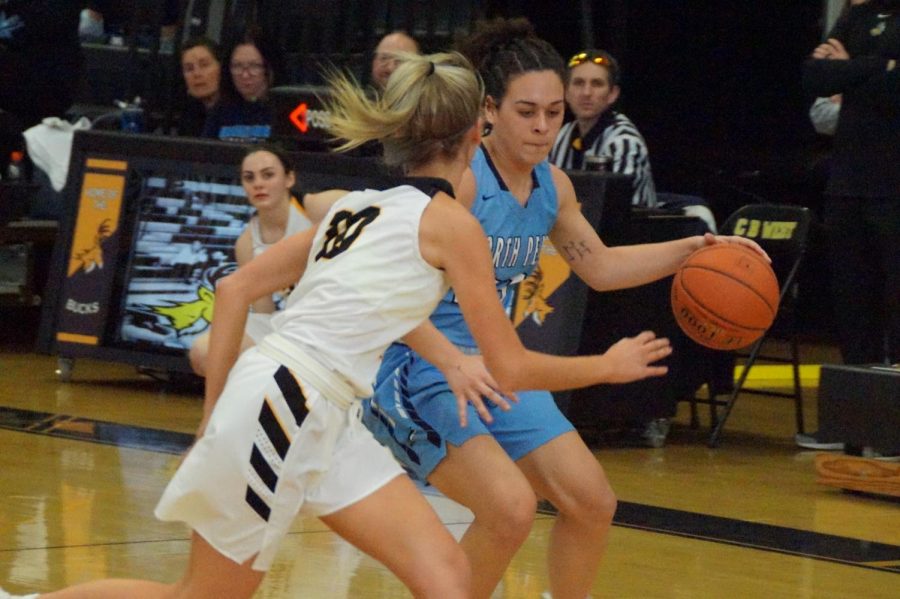 Pushing the Pace: Carley Adams dribbles with Olivia Irons guarding her in a fast-paced game between the Knights and Bucks.

DOYELSTOWN- The Knights traveled to Doylestown with hopes of changing their fortunes against the Bucks.  But, CB West once again prevailed.

West built up their lead to start the second quarter, and a key reason for that was that they entered the bonus at almost the beginning of the quarter.  The Knights still stayed in the game and finished the half strong as the score at halftime was 30-25.

Throughout the first half, North Penn left space for Jess Broskey to shoot from behind the arc in an effort to make her beat them by shooting threes.  And in the third quarter, she certainly threw that gameplan away for the Knights.  She opened the quarter with three three-pointers and built the Bucks lead to 39-28.  At the end of the third quarter, West led 51-39.

“Even when you try to take away a player like Maddie [Burke], who’s phenomenal, when you take her away they have so many other weapons.  There’s not anybody that you can kinda say, we’re gonna leave you alone.  We kinda did that in the first half and then Broskey steps up and hits three threes to start the second half and we then have to change and adjust our defense,” Head Coach Jen Carangi said.

North Penn battled back once again and after an Abby Plaugher three with 6:18 left in the game, the score was back to a possession, 51-48.  Broskey made one more three with 3:02 left in the game and it was a big one, extending the West lead to 57-52.  Olivia Irons closed out the game at the charity stripe by going 9/10 at the free throw line in the final quarter.

“It would have been really easy to for them to just give up and walk away but they fought and they continued fighting.  And that’s the thing as their coach I’m so proud of, that they continue doing it and it’s tough.  This is a tough one to swallow,” Coach Carangi said.

The Knights will now turn their focus to the state playoffs with the state bracket to be announced later.  The girls will play CB East on Wednesday at home for state seeding and the final district standings.  The Knights and Patriots have split their games this year as the first time around, the Patriots won 52-44 before the Knights took down the Patriots 68-62.

“We’re gonna finish out next week and obviously play and hope for the best seed that we can get, but beyond that our season starts almost all over again with states and a fresh season and fresh record and just to be ready to play,” Coach Carangi said on the focus going into states.