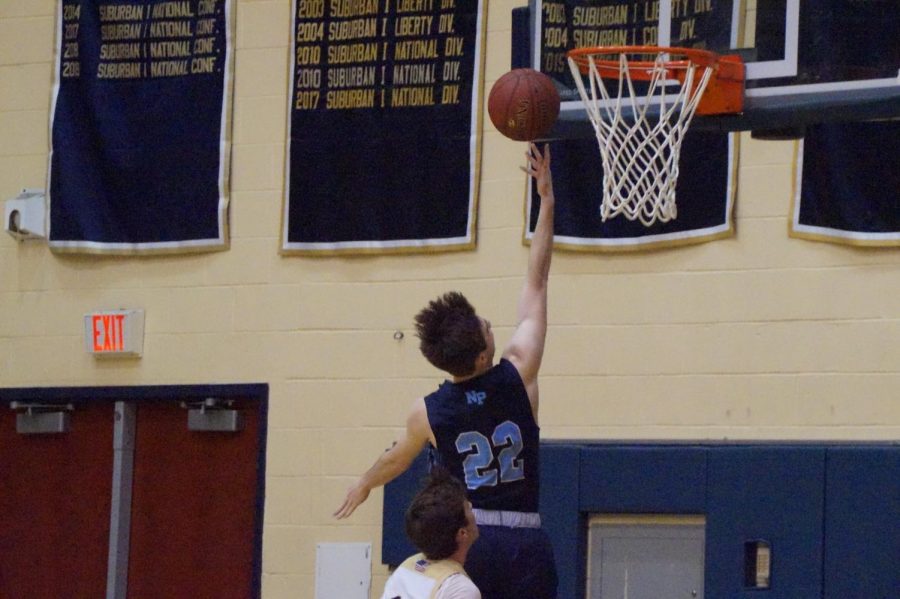 HOLLAND- Sometimes the shots don’t fall like on Tuesday night’s loss.  But tonight, they did for North Penn.

“We’ve been inconsistent during courses of this year so it’s hard to get too excited cause you’ll never know what we’ll get but the one thing we talked about was that defense travels well and I thought we did a really nice job in the second and third quarter and played good defense,” Head Coach John Conrad said.

The Knights got the scoring started as Mike Chaffee found Josh Jones on the backdoor cut for a layup with 7:22 left in the first quarter.  The Golden Hawks tied the game with 6:52 left in the opening quarter by Luca Baratta’s jumper.  The Knights only needed 9 seconds to break the tie as Matt Swanson made a basket in the paint and was fouled.  His free throw was good and North Penn went up 5-2.  Then the Knights went on a 6-2 run for the next minute and 53 seconds as the Golden Hawks called a timeout with the score at 11-4.  It was effective as Council Rock battled their way back and after a three from Baratta, South took a 14-13 lead.  Jones responded with a three of his own to retake the lead, 16-14.  At the end of the first quarter, the score was 18-16 in favor of North Penn.

After that, North Penn couldn’t be stopped for the remainder of the game.  They built up a double digit advantage going into halftime, 32-22, and cruised for the rest of the game.  Kolby Barrow had two threes in the second quarter to help build that lead.  Overall, the Knights made 6 three-pointers, as Jones and Chaffee added 2 each.  The key on the hot shooting night was the big man, Swanson, who made his presence felt in the paint with 23 points.

“I mean I struggled first half, they were doing a really good job doubling me and I pitched out to my shooters and that was the gameplan for the first half, it was really working for us.  And then buckets started coming easy for me in the second half because we started penetrating and pitching it down to me and having a huge offensive game thanks to my guards,” Swanson explained.

Next up for the Knights is a trip to CB East (#12 seed) Tuesday in the second round of playbacks.  Which ever team wins this game, will be headed to the state playoffs.  The Knights will have a tall task against the Patriots as North Penn is 0-2 against CB East this year losing by scores of 70-47 and 50-45.

“Same as it’s been, play good defense, work inside to Matt, and rebound the basketball,” Coach Conrad said on his plan for Tuesday night.