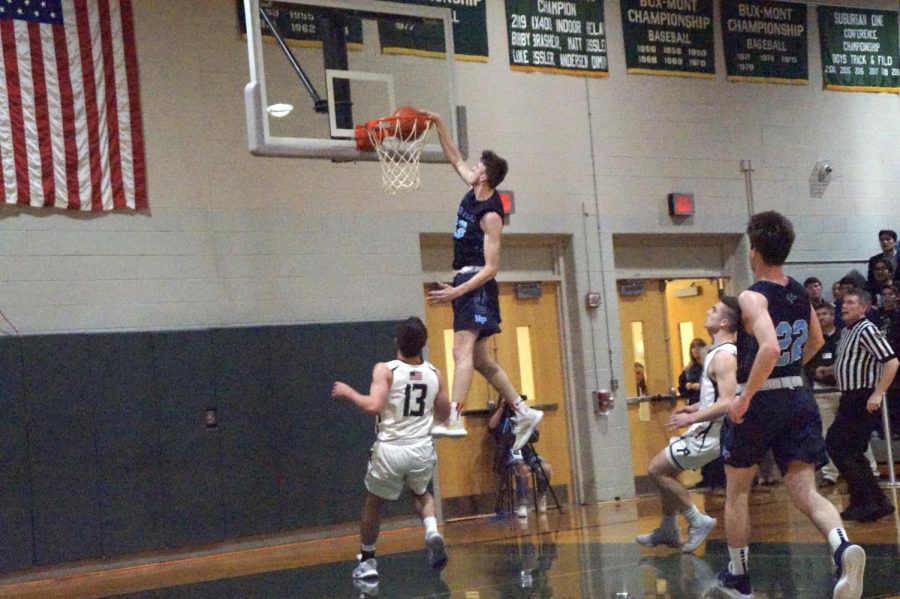 PERKASIE- Two weeks ago, a shot from past halfcourt fell in for North Penn.  This time around, on the same Pennridge hardwood, it was a very different shooting night for North Penn.

“[Pennridge] played a lot of zone they didn’t play the first time around and we just didn’t shoot well enough to make them pay for it,” Head Coach John Conrad said.

The night started with Connor Pleibel scoring from the post on the game’s opening possession.  Josh Jones then put up 5 points for the Knights to give them a 5-4 lead with 5:07 left in the first quarter.  Christian Guldin knocked down a three to retake the lead for the Rams, 7-5.  Rob Carangi found Jones with 4:04 left in the opening quarter for a layup to tie the game at 7.  That tie was broken by a layup from Guldin with 3:43 left in the first.  With 2:30 left in the quarter, Trent Fisher drove to the basket and posterized North Penn’s Joe Larkins to create a roar in the gymnasium.  At the end of the 1st quarter, Pennridge led 17-10.

The Rams did not look back after that.  They went on a 7-4 run in the first 3:55 of the second quarter to create a double digit lead 24-14.  They took a 29-16 lead into halftime.  The second half wasn’t awful for North Penn as the second half score was 16-15 in favor of the Rams, but the deficit at halftime was too much for the Knights to come back from.  Guldin finished a 22-point performance by going 5/8 at the free throw line in the final quarter to close out the game.

“I never felt comfortable because I saw what happened against West.  [North Penn] hits two or three, threes and the game changes,” Pennridge Head Coach Dean Behrens said on the Knights ability to come back from previous deficits.

North Penn will now enter the playback bracket in attempt to still make the state tournament.  They will play at Council Rock South Friday against the 16th seeded Golden Hawks.

“Not a lot of teams have still have a chance so we’re fortunate.  We’re still in the hunt.  We have practice tomorrow, get a little better, and see what happens Friday,” Coach Conrad said.