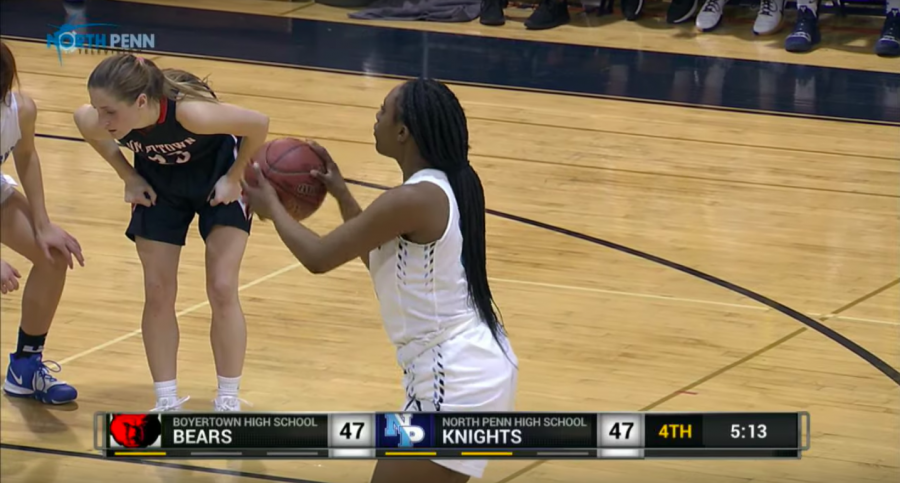 Valerie McGriff at the free throw line for the Knights.

TOWAMENCIN – It’s been three years since the NPHS navy gym has seen girls playoff basketball, the final minutes on Friday night saw everything North Penn had.

“All season long it’s been a group effort, but tonight I saw Valerie play really well. Offensively and defensively she played really well. Rachel Dunn also played very well. Between now and Tuesday we really need to work on our defense because usually it is very solid. Our offense kept us alive and foul shooting in the last quarter. We knocked down the free throws when it mattered,” commented Head Coach Jen Carangi postgame.

The night started off fast and frenzied as Katie Early got the game off to a start with a tough and one. That was immediately followed down the court with guard, Avery Sweisfort, rushing down court to get fouled, but subsequently she missed both free throws. With 2:06 remaining in the first quarter, Val Mcgriff grabbed the rebound off Alaina Mullaly’s shot and put it up for an and one. The first quarter saw some thrifty passes as Carley Adams had a great bounce pass with 1:53 to find Rachel Dunn down low and Ashley Kapp had a backdoor pass to Julia Smith at the one minute mark in the first.

“I felt a lot better and the mentality of the post is yours, otherwise they will take it from you everytime. We got to have the mentality that we can win any game with solid defense and running our plays,” remarked Dunn.

The second quarter saw Dunn stepping up inside while McGriff rested on the bench. For Boyertown, the three point barrage was their gameplan. With 1:25 left in the second, Smith found the open three after a succession of passes from the Bears. In the final seconds of the first half, Kapp drained a deep contested three to close North Penn’s 30-27 lead going into halftime.

McGriff made her presence known in the paint during the third quarter with 5:30 remaining. She swatted away the Boyertown shot, sending it up court to be followed up with a North Penn bucket by Alli Lindsay. She later caused Sweisfort to commit an offensive foul that helped give them some momentum.

“I came in prepared to do my job in the post. Rebounding, I went for it and I take the mentality that my job is the clean up work, so I should be the one to go get the rebounds,” said McGriff.

The fourth quarter saw  Kapp find the hot hand, as she started off with back to back deep contested threes to continue on the barrage from behind the arc from Boyertown. With 3:14 left in the fourth quarter, Lindsay stripped the ball loose and scored. As the lead was going back and forth, with 2:22 in the fourth, Mullaly snagged a steal and put up the open layup to give North Penn the lead. This was followed by back to back buckets from Kapp. The final minutes was summed up with Boyetown having to foul as Adams was sent to the line and went 4-4 on free throws. Mullaly was sent to the line with 30 seconds left and she hit her last shot in the Navy Gym as a North Penn Knight as the Knights went on to win 64-53.

“I feel great, we got a win and haven’t got a district win in years. I’m thrilled for the girls but I know it’s just starting now and we need Tuesday night to get into the state tournament,” remarked Coach Carangi.