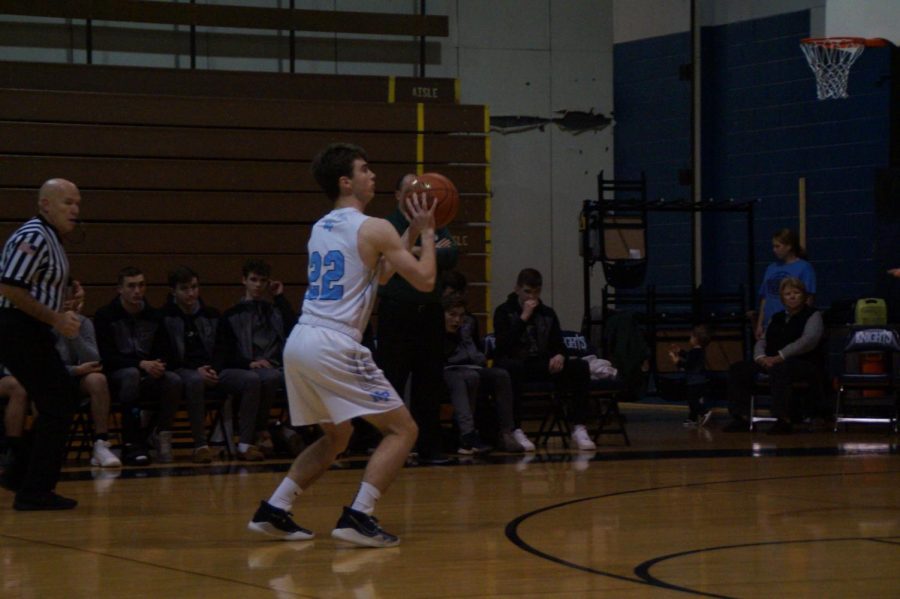 Mike Chaffee shoots a three-pointer in the first quarter against the Rams.

TOWAMENCIN- The reigning state runner-ups, the Rams of Pennridge, traveled to the North Penn High School gymnasium and for most of the game, the Knights went punch for punch and round for round with the Rams, until the final quarter.

Josh Jones started the game hot by putting up the first points of the game on a post fadeaway.  He then followed it up by going coast to coast for a layup to put the Knights up 4-0 with 6:07 left in the first quarter.  The Knights extended their run to 7-0 with a Mike Chaffee three-pointer with 5:27 left.  Then the Rams went on a run of their own and after a three from Luke Yoder, the Rams took an 8-7 lead with 3:48 left in the quarter.  Rob Carangi then drove on the baseline for a layup to reclaim the lead for the Knights.  Ryan Benscoter responded with a bucket of his own and the Rams went up 10-9.  Chaffee then passed to Joe Larkins with 1:31 left in the opening quarter for a three and the Knights went up 12-10.  Then the Knights on the court and in the student section got a spark of energy, as Larkins sent a laser to Josh Jones in midair for an alley-oop dunk.  The Knights took a 16-13 lead into the second quarter.

That lead didn’t last for long as Anthony Phillips hit two straight threes to open the quarter and the Rams moved out in front 19-16.  The Knights tied the game up at 21 with a Chaffee three-pointer.  Yoder then hit a jumper out of the post with 5:52 left in the quarter, to take a 23-21 lead.  Going into halftime, the score was 31-27 in favor of the Rams.

“[The Rams] are good, they’re solid defensively.  They’re fundamentally sound.  They contested shots and rebounded really well and we got one shot and that’s all we had,” Head Coach John Conrad said.

The Knights will play the second game of a boys-girls doubleheader Thursday at Souderton.  The girls play at 6:30 and the boys at 8:00.  The girls took down the Indians earlier this season 46-38 while the boys lost 52-39.

“We’re getting better, and let’s come back to work tomorrow and see what happens,” Coach Conrad said looking forward to Thursday’s matchup.