Knights lose to Bucks in a early season test 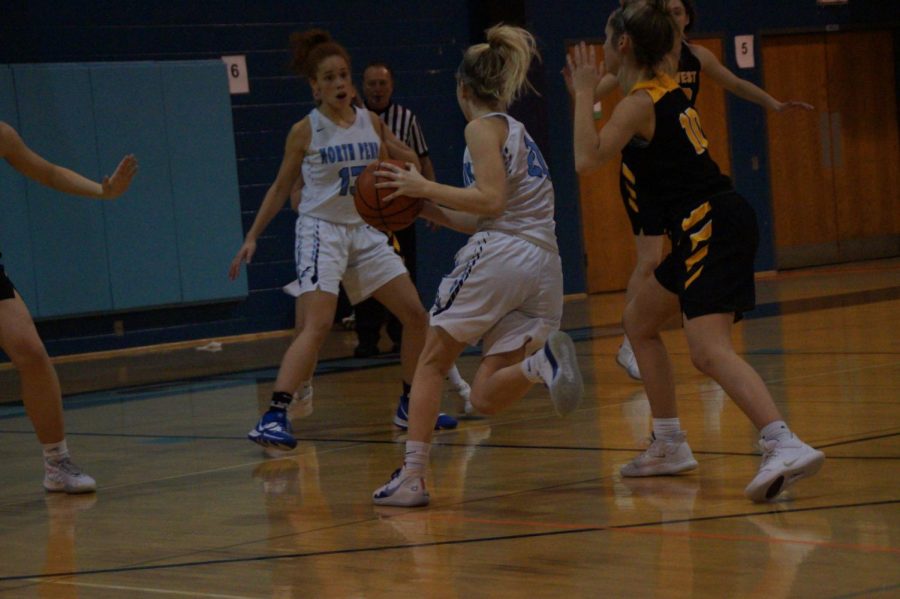 Alaina Mullaly drives to the basket for a layup.

TOWAMENCIN- The Knights knew what their game against the Bucks meant for their season.  It was very much a test to see how they could play against one of the better teams in the league.

The North Penn Knights (7-3) lost to the Central Bucks West Bucks (7-3) 57-45 on a Tuesday night game in the North Penn High School gymnasium.

Paige Gilbert got off to a fast start as she put up the the first 4 points of the game and gave the Bucks a 4-0 lead.  North Penn went scoreless for the first four minutes of the game, until Val McGriff made a free throw.  Then McGriff scored a layup, off a pretty feed from Alli Lindsay, and made it a 4-3 game.  West continued to hold the Knights off, and the score after the first quarter was 13-5.

The Knights defense struggled in the first half.  As a team, they try to hold opponents to 40 points for the game.  By the end of the first half the Bucks were on pace to exceed that 40-point threshold as at halftime the score was 24-17.

“A team like CB West, who is very talented offensively, I know that they are going to score their points.  We play defense, we throw a lot of different things at them and our hope is just that we can hold them to one shot [and] get rebounds.  At times we were successful with that.

When we did that, that’s when we made our runs, but we just have too many lapses.  It’s kinda been this theme that we need to figure out,” Coach Carangi said.

The Knights continued to fight, and in the 4th quarter, it seemed like they were finally going to complete the comeback after 5 points from Katie Early and a big three from Lindsay.  However, the Bucks made sure there was no comeback as they closed out the game by going 9 for 11 at the charity stripe in the 4th quarter.

The Knights will play the Titans of CB South on Friday at home.

“CB South is always tough and I know they lost some with graduation last year but they’re scoring a lot of points, which means girls are putting the ball in the basket, so we gotta come out ready to play,” Coach Carangi said.