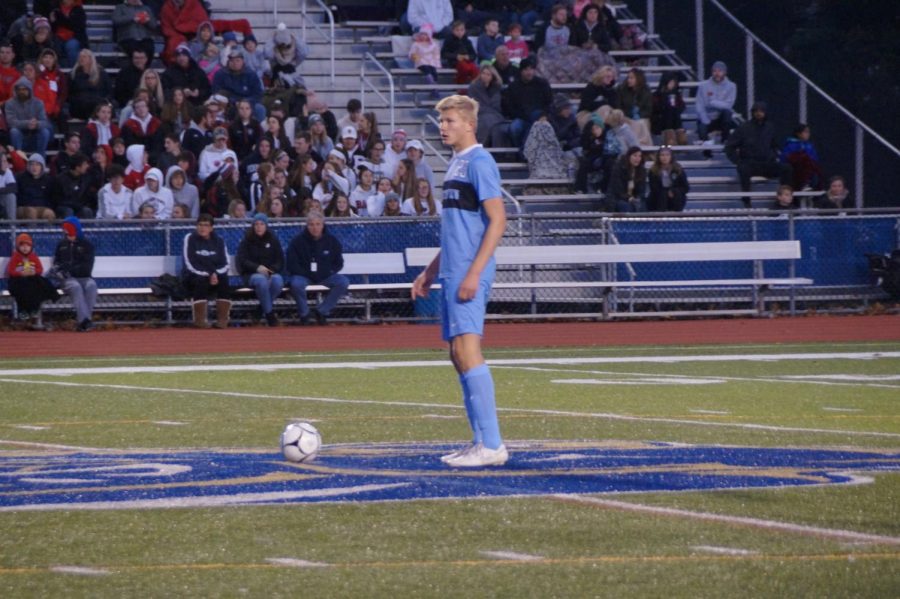 Josh Jones in the district title game for the Knights.

TOWAMENCIN- For soccer fans, or fútbol to the rest of the world, Real Madrid is universally known as one of the best franchises in sports.  Every year, Adidas youth soccer clubs nominate top players to head over to Europe and train with some of the world’s best fútbol squads.  This past summer, North Penn’s very own Josh Jones, was selected to go train with Real Madrid.

“Adidas selected top clubs in the U.S., which one of the clubs I play for, and they ask to nominate one player.  My club [Philadelphia Ukrainian Nationals] nominated me and then I had to get chosen out of a group of national players and they chose me as one of the top thirty-two in the country,” Jones explained.

The junior flew out to Spain in the second of week of August, where his experience at the Madrid facilities began.

“We flew out of New York and I met everyone from around the country and we flew to Madrid together.  The first day, we toured the Spanish National Team complex and then we had our first training session.  For the rest of the week we trained twice a day at Real Madrid’s training complex and then our last two days we played against two La Liga academies,” the junior said.

The highlight of the trip for the 6’5” midfielder came in one of those games.

“Scoring a goal against the one La Liga academy which we tied.  We played Rayo Vallecano which is U17 team academy and they’re very good and there were a couple scouts there for that game so it was pretty cool scoring against them,” Jones said.

In his nine days in Spain, Jones learned what it was going to take to eventually go pro.

“I learned that if you want to go pro over there, you have to really be committed and it’s a lot more hard work than I probably originally thought, but if that’s what I want to do, which I think I do, then I’m going to have to put in a lot more work,” Jones said.

Jones’s soccer future is definitely bright as he plans on joining a division one soccer program after high school and trying to go pro after that.  But even Jones’s near future has a lot in store as he is one of the captains that will look to lead the Knights to a state title on Friday.

“I’m just really excited to have a chance to bring home North Penn’s first state title for soccer.  It would mean a lot for the program as a whole and to all of the guys who came before us.  If we win, it’s not just for us, but it’s for them too,” Jones said.