After four years, a sweet destination for Houlihan 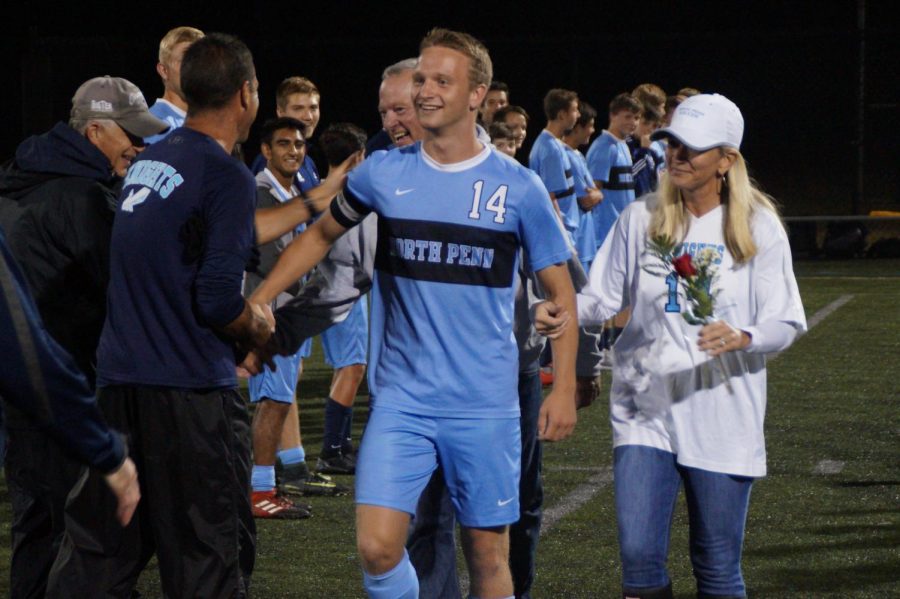 The Knights honor Carter Houlihan on senior night as he has been a 4-year starter for the soccer squad.

TOWAMENCIN- “I can’t imagine coming out here every fall and not playing North Penn Soccer.  I’ve made so many friends.  It’s been a big part of my family.  My parents, my grandparents, my uncle, and my aunt come out to every single one of my games.  It’s just kinda like the talk of the town for us.  We meet up after some of the games, we got out to dinner with some of the team members and it just kinda consumes my life for these two or three months,” senior Carter Houlihan said.

Houlihan has been a critical part of the soccer team not just this year, but for four years as he joined the team as a freshman and has been a varsity starter every year.  He started off as a center back before becoming a midfielder for his sophomore and junior year.  He is now playing forward during his senior campaign.  Since Houlihan has joined the team back in the 2016 season, the soccer squad has been making team history every year.

“Freshman year we won the first round of states against La Salle and it was a great moment.  At that point, that was the furthest North Penn had ever made it so it was kinda cool to be a part of that team.  The next year, we had the best regular season record out of anyone in North Penn history.  And then my next year, so my junior year, we beat that record so that was the best team.  Then this year, we made it the furthest any team has ever made it.  So being a part all four years of the best North Penn team in history, year after year after year, that’s kinda been cool,” Houlihan explained.

Houlihan only plays soccer at North Penn High School, but that wasn’t always the case in his younger years.

“I grew up playing basketball, baseball, and soccer and I was pretty good at all of them.  I stopped playing basketball because I didn’t like it that much.  Baseball and soccer were my two sports.  I was really good at baseball and really good at soccer but I don’t know, I just kinda fell in love with soccer.  My older sister played it, so I just kind of followed her footsteps and realized that if I wanted to focus on soccer, I would have to stop playing baseball,” Houlihan said.

Along with his sister, Houlihan’s family has been a major part of his journey in the classroom and on the field.

“My whole family has been such a big influence on me.  My parents put me and my sister both in a three-year old soccer team and I’ve kinda just been following her footsteps ever since.  She was really good at soccer, she was always the best player on the team so I always looked up to her.  My parents have been great between driving me to everything, making sure I was on time, giving me talks before and after games, and just kinda being my rock and support,” Houlihan said.

All the hard work Houlihan has put into soccer has caught up to him as he committed to Lafayette last year to play collegiate soccer.

“A lot of the training I’ve done, I’ve been on multiple different teams, I’ve been in different countries playing soccer with a lot of different people.  So, between all of the coaching and all the training and all the hours I’ve put in, it allows me to be the player I am today.  I’ve had college coaches, coach me, and other coaches and I’ve played with some great players that are going to division one schools, so being around that environment twenty-four seven, has just been great for me,” Houlihan explained.

Houlihan has traveled to other countries but this past summer, he traveled to Kansas with his club team, Lehigh Valley United, where he helped win the McGuire Cup, a national championship and the oldest youth sports trophy in the nation.

“It was just amazing, it was one of the best feelings ever.  Being known as the best team in the country and to hold that trophy at the end, it was just great,” Houlihan said.

Houlihan, who set a single season goal-record for the Knights with 28 goals, got to hold up another trophy recently, as the Knights won the district title almost two weeks ago.

And he’ll possibly have the chance to hold up that state trophy on Friday night as the Knights will be up against the CB West Bucks in Hershey PA at 6:30.

“We’re the favorite.  CB West is the 23rd seed which is remarkable that they made it this far.  They have nothing to lose, they have already proven everything.  So being the favorite, it’s a good position to be in but also, we can’t be ahead of ourselves and cocky thinking we already have this game in the bag,” Houlihan explained.