Knights to play for State Title 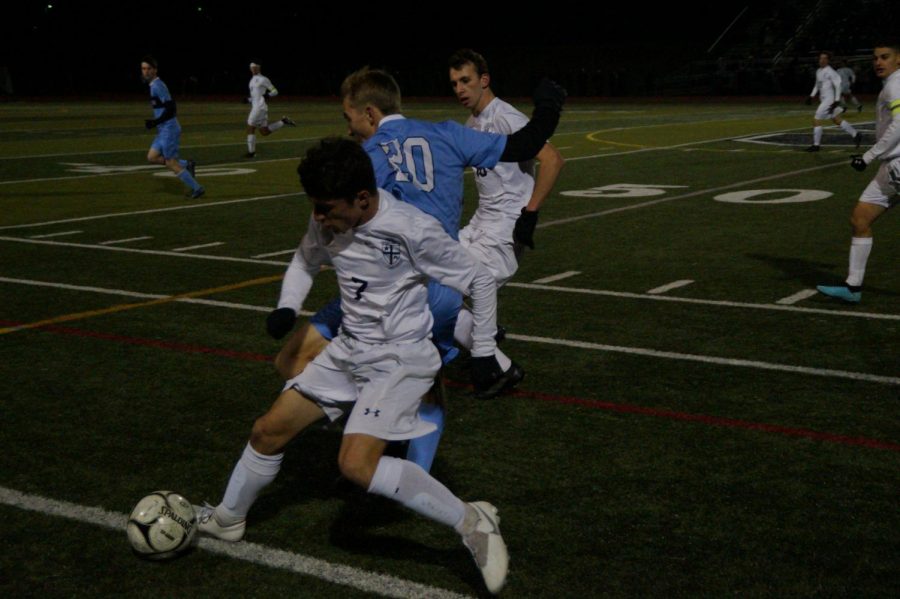 WARRINGTON- The trophy for the district title has already been captured for the Knights and after their Tuesday night win, the boys soccer squad will try to add a state trophy to the North Penn High School sports lobby.

“It means a lot for our coaches, for myself, for our team, and for our North Penn family in general.  As good as we’ve been year in and year out, we just never have gotten this far and now this group of players has put us there.  So it’s exciting…I’m thankful,” Head Coach Paul Duddy said on advancing to the state final game.

The first of four goals came in the 33rd minute.  Carter Houlihan sent a corner kick in, and Jamie Stewart, who has been battling an illness, came in with a diving header to get the Knights on the board, 1-0.

In the second half, Houlihan kicked a shot that rebounded off La Salle’s goalie, Jack Heineman, and Mike Chaffee poked in an easy goal for the 2-0 lead.  The Explorers had their chance to cut the lead in half as they got a penalty kick.  Brandon Curran took his shot and hit the crossbar as the Explorers missed their chance to get on the board.  In the 72nd minute, things got ugly for the Explorers as an own goal was scored.  Then in the 78th minute, Sean Flatley got a rebound off Heineman and scored a goal of his own.

Throughout the game, goalie Sawyer Meade came up with some critical and clutch saves as he got the clean sheet.

“Just staying calm in the big situations like always.  Keeping the defense intact making sure they’re playing the right spot and they all played amazing tonight,” Meade said regarding the keys to success for the defense.

The Knights will now head to Hershey PA where they will go against the CB West Bucks on Friday at 6:30 for the state title.  This is a big revenge game for the Knights after losing to the Bucks twice last year, including once in the district playoffs on penalty kicks.  The Knights are 2-0 against West this year with wins by a score of 5-2 and 3-1.

“Three years ago I started off here having dreams and aspirations for this exact moment and it’s finally come true.  We just have one more game and we have to handle it,” Houlihan said.