Stites from Staab, and a district title was won 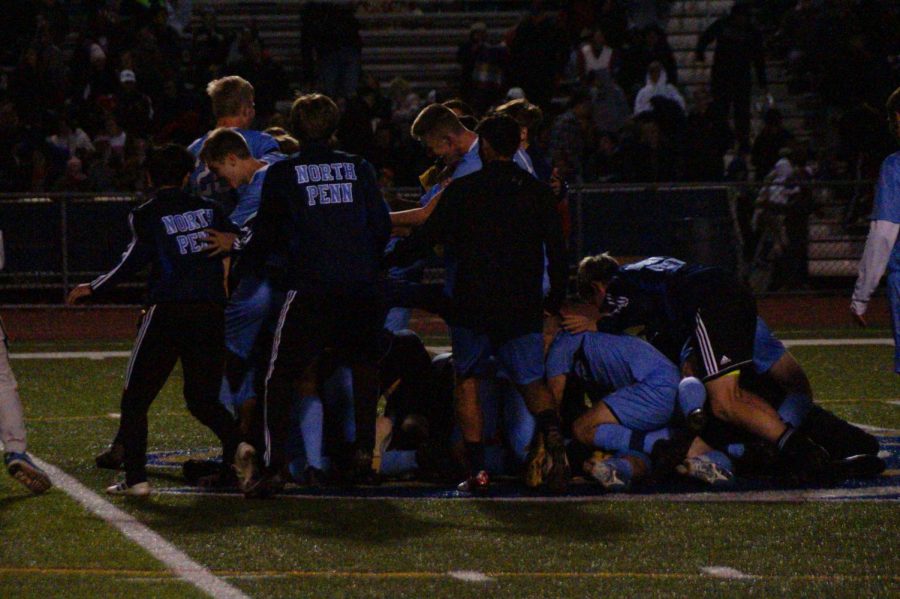 ROYERSFORD- After a first half that ended in a nothing-nothing tie, the feeling that one goal was all it was going to take to win grew during the halftime break.  The only question was, which team was going to score that goal?

The North Penn Knights (21-1) beat the Boyertown Bears (19-3-1) to win the District One AAAA championship at Spring-Ford High School.  It is North Penn’s first ever district title in boys soccer.

“It feels terrific, it feels great.  All the credit to our players and previous year’s players that I feel as a group, came up a little short.  So to finally win the prize is pretty great.  Credit to them, credit to our coaching staff too.  Chris DePeppe, our assistant, just does a great job with these guys,” Head Coach Paul Duddy excitingly said.

The first half might have not contained a goal but it was still an entertaining first half of soccer.  Both teams were getting their chances but neither could capitalize.  When that one and only goal did come, it didn’t come from the foot of Carter Houlihan, Josh Jones, or the Stewart brothers.  Instead it was Hunter Stites, who became the game’s hero.  In the 42nd minute of the game, the ball was flying everywhere in Boyertown’s box and the ball found its way to senior Collin Staab and he passed it to the sophomore Stites, who poked it into the net for the goal.

“I saw it bouncing around and I saw that they made a mistake and coach always talks about having awareness.  I was just aware and I pounced on it and chipped it over,” Stites said.

Then it was time for the defense to hold their ground and run out the time and they were successful as the Knights held on to their 1-goal lead to become district champions.

Now with the district prize already won, the Knights will look for a bigger trophy as they enter the state tournament.  Information on the state bracket is still to be decided.