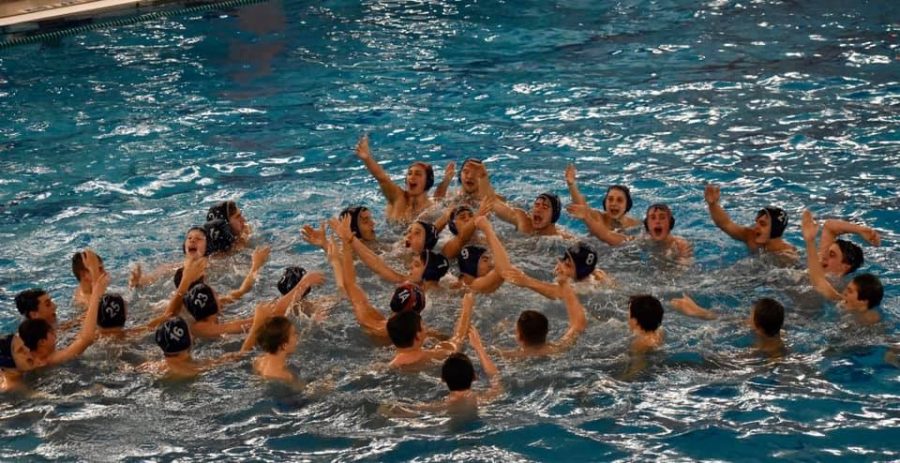 TOWAMENCIN- Fans roared from above the pool in Wilson High School’s bleachers as the guys in the pool celebrated a 12-4 win against Cumberland Valley to claim their three-peat for the state title.

“The last game I really feel like we played as one team instead of seven individual players. We were all making the right decisions helping each other out. That really helped us win as a team,” senior captain Evan Mancini said.

Even with two state titles already won, the Knights season was not on cruise control as the road to the state championship consisted of some tough barriers.

“Even though we came in with a target on our back, we also came in with a chip on our shoulder. We didn’t take anything for granted and played every team [as] if they were as good as we were,” Mancini reflected.

The team filled with eleven seniors, all with three state championships, had been playing together for years and made their last hoorah a good one.

“The bond we created throughout the years helps us a lot. The chemistry we gain over the years helps us when we get into the championship season. This year it happened to turn out in our favor and it was awesome,” senior Sean Faikish said.

Of those eleven seniors, five made the all-state team. Faikish, Mancini and Sage Trautz were named the first team, Chris Killion was named to the second team, and Greyson Campbell made the state’s third team.  Jack Kim landed an honorable mention.

“It was a good feeling; we worked hard this season and to see it pay off and come full circle. It’s nice to be recognized,” senior Sage Trautz said.

As the seniors now finish out their polo careers, the memories made will not be forgotten and the torch will be passed down to the underclassmen to continue this dynasty.

“One heck of a ride, all the highs and lows, and to know the last game I played I end up on top. That’s something I will cherish forever. To all my teammates and coaches thank you for everything,” Faikish said.