Knights give rival Indians first L of the season 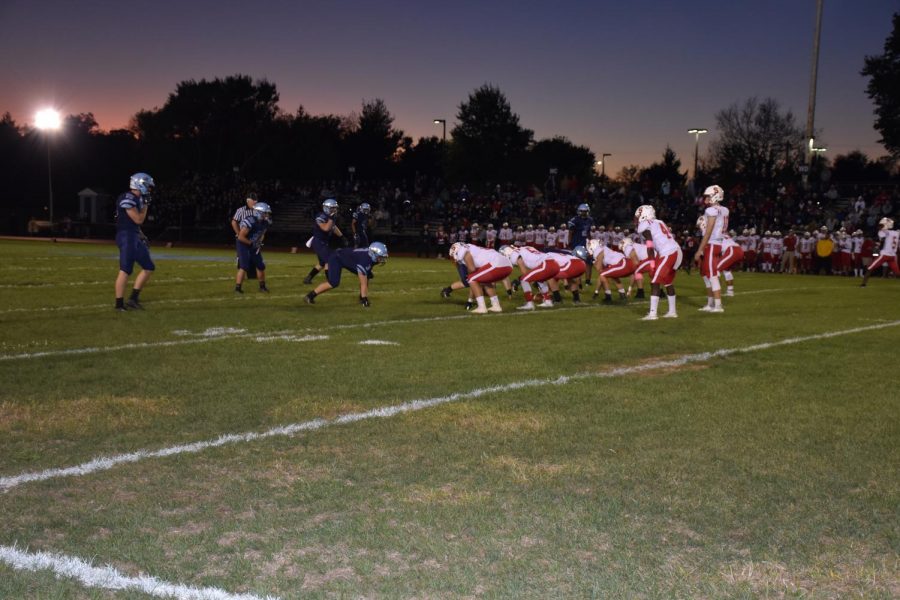 The Knights and Indians have become a big rivalry in local high school sports, with only a 15-minute drive away from each other.

TOWAMENCIN- This game will go down in the history books for North Penn High School.  It was a perfect game for the North Penn community.  A homecoming football game against the undefeated rival Souderton Indians with the home fans in white and a packed away side in a blackout.

“I think it’s a big win.  Souderton is a heck of a team.  I said look, ‘they’re gonna run the table I would think.’  They’re gonna win some games going in and maybe we’ll see them again in the playoffs,” Head Coach Dick Beck said.

It did not take long at all for the student section to get loud as Kevon White took the opening kickoff 98 yards to the house and got the Knights a 7-0 lead right out of the gate after Daniel Moon’s PAT.

“I saw all my guys get their blocks and as I ran down the field, my teammate in front of me got the last block I needed and I saw nothing but green and I just took it,” White said.

The Indians answered back as DeAndre Wakefield scored on a 38-yard rushing touchdown to tie the game up.  Wakefield finished with 89 rushing yards.  The Knights got the ball back and on that possession, sophomore Khalani Eaton eclipsed 1,000 rushing yards on the season.  The Knights also scored coming off a 23-yard touchdown pass from freshman Ryan Zeltt to senior Evan Spann, who returned from an ankle injury this week.  The first quarter ended with the score at 14-7.  Zeltt was 6-12 on passing with 153 passing yards and 2 touchdowns.

The Indians struck first in the second quarter after converting on a 4th and 2 in the red zone.  They then gave the ball to Jalen White who ran to his left for a 7-yard touchdown.  Senior RJ Macnamara responded with a 24-yard touchdown run of his own.  Souderton’s quarterback Andrew Vince connected with White on a flat route that White got loose on, as he scored a 25-yard reception with 5:50 left in the first half.  Macnamara caught a pass from Zeltt and then stiff armed one Indian.  Spann provided a block and Macnamara got rid of another defender with a juke to score on a 63-yard reception.

The score was 26-21 to start the second half and after a busy first half, there was only one score in the third quarter.  The Knights went on a 44-yard drive down the field and scored on a 2-yard touchdown from Macnamara.

With 6:46 left in the 4th quarter, senior Nate Brown scored on a 2-yard rush to cap off a 64-yard drive by the Knights.  Macnamara scored his 4th touchdown of the night with a 58-yard rushing touchdown to put the Knights up 47-21.  Macnamara finished a career game for him with 152 rushing yards.

“It felt great.  We saw they were 6-0 coming into the game and we knew we had to work hard and everyone just kept thinking ‘We’re 20-0 against them in the last 20 years,’ we need to keep that going,” Macnamara said.

The Indians played hard all the way through but Jalen Edwards sealed the deal with an interception with under a minute left.

The Knights will be at CB West next week for another key matchup this season.