Seniors lead the way for 6 goals in win 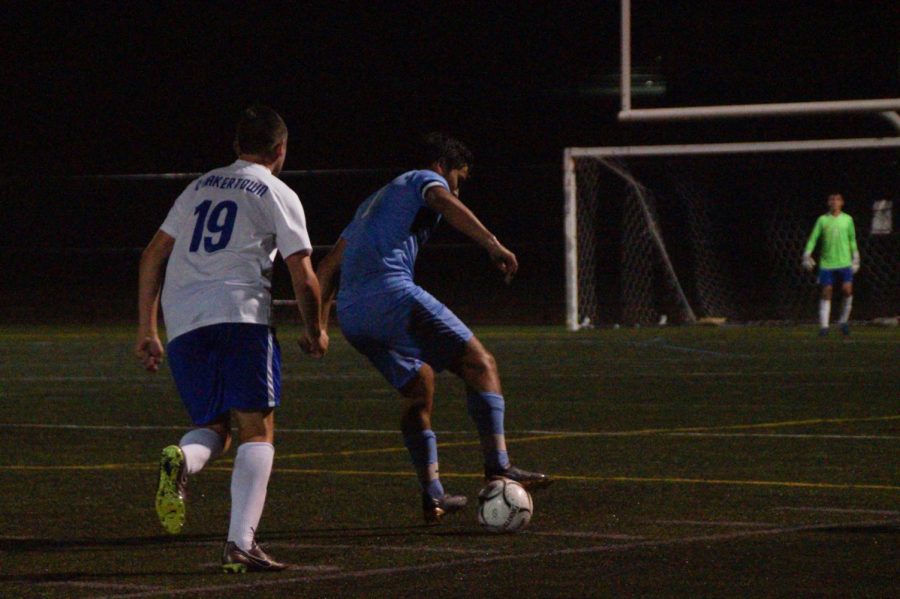 Ryan Stewart dribbles with the ball. The senior had an assist in the game.

TOWAMENCIN-  It was senior night for the Knights and they owned it with senior leadership coming from the everyday starters and the usual substitutes, that got the start Thursday night.

“We had four, first time goal scorers tonight which is great.  A lot of these guys quite honestly, who come off the bench for us would start for almost every team in the area…when they get on [the field], they want to make the most of their chances and they did tonight,” Head Coach Paul Duddy said.

The North Penn Knights (11-1) took down the visiting Quakertown Panthers (2-10) 6-1 in the misty Thursday night game.

It took a while for the Knights to get their first goal, but once they did, the goals came fast and furious.  Senior Jamie Stewart found senior Mike Chaffee going down the field and Chaffee passed to senior John Graber, who finished the job with a goal.

“It was a tough game out there.  We tried to get one in early and couldn’t get one.  Zero zero for a while so getting the first one was huge and it kinda opened the floodgates a little bit,” Graber said.

2 minutes later, Chaffee took the ball down the field again, but this time finished by himself with a goal of his own to put the Knights up 2-0.

“We love counter attacking.  We knew we had the pace up top.  We can attack all day and we just got through on them,” Chaffee said.

39 seconds later, senior Ryan Stewart connected with fellow senior Carter Houlihan for a goal.  Then the Knights struck again in the 37th minute off a penalty kick from senior Jack Durkin.  The Knights took a 4-0 lead into halftime.

The Panthers got their first goal up on the board in the 61st minute with long range goal from Max Jalboot that went just out of the reach of the goalie, Kyle Brophy.  The Knights did not remain silent however.  Senior Liam Gorham found his senior partner Nate Burnell for a goal and then junior Nick Rey put one in himself as the Knights took the commanding 6-1 lead.

The Knights will be back in action tomorrow at CB East (6-4-2).  The Knights only loss of the season came against East when the Patriots won this matchup 1-0.

“That’s the only blemish on our record so far and that’s a huge game, huge three points in the conference,” Coach Duddy said.