Phillies icons for the Hall of Fame? 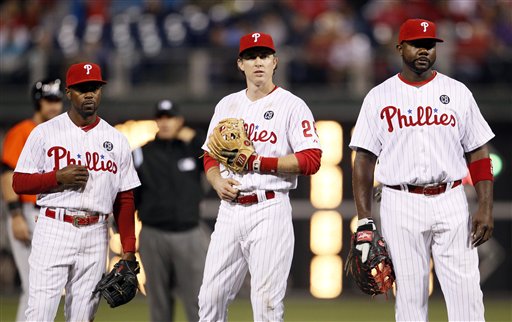 October 31st, 2008 was Halloween for everyone outside of East Pennsylvania but Halloween didn’t exist that year for the Philadelphia Phillies fans who celebrated the 2008 championship almost 11 years ago.  Once the Phillies declined Ryan Howard’s contract option back in 2016,  every piece of the championship team that this generation grew up to love was gone as Cole Hamels and J.A. Happ are the only two players from the team that are still on an MLB roster.  Quite some time has passed to say the least and this year Jimmy Rollins, Chase Utley, and Howard all had ceremonies to officially retire as a member of the Phillies organization.  So, five years from now these three will enter the hall of fame ballot and it makes you wonder, who will make the hall of fame out of these three?

When J-Roll was hot, the rest of the team followed.  The leadoff hitter when he was in Philly, played in 17 MLB seasons and was a top shortstop when Hanley Ramirez, Derek Jeter, and Troy Tulowitzki were also at the height of their game.  The accolades for the 2007 MVP don’t look hall of fame worthy as he only has one silver slugger, three all-star game appearances, and four gold glove awards.  But when you look at the overall numbers and impact, it should not matter and I think Rollins belongs in Cooperstown.  His .264 batting average and 2,455 hits compare almost identically to Hall of Famer Ozzie Smith while Rollins has 143 more RBIs and 203 more home runs than Smith.  Now obviously, Smith made the Hall of Fame mostly for his glove work and is a much better defensive player than Rollins, but Rollins was considered the best defensive shortstop for a good amount time.  Among retired shortstops that qualify, Rollins has the third highest fielding percentage all-time behind Omar Vizquel and Troy Tulowitzki.

And like I said, the impact Rollins had was critical for the success of his team.  During Game 4 of the 2008 World Series, broadcaster Joe Buck shared with the viewers that “In the 85 wins that Rollins has been in the lineup, he’s hit .318 and scored 64 runs.  When he’s been in there during the 64 losses, he’s hit just .206 and scored 19 runs.”

It won’t be a stroll into Cooperstown for J-Roll, but he certainly has the numbers to one day be among the game’s greatest.

Out of the three, Utley has the best chance of getting into the hall.  Possibly the best second baseman in the game, at his peak, Utley made the all-star game six times including five starts at second base.  Although he did not win an MVP, he showed consistency at a high level as he finished in the top 15 of MVP voting 5 times to go along with 4 silver sluggers.  From 2006-2009 he finished in the top 3 each year in WAR.  He is mostly remembered for his offense but Utley was a plus defender and came up with big plays with his glove and could steal bases too, making him a 5-tool player along with being a clutch October hitter.  Similiar to Rollins, Utley will definitely have to spend more than one year on the ballot but could (and should) eventually get in.

If it were’t for an Achilles injury, Howard probably would be an all-time great and a first ballot hall of famer.  But when he went down with an Achillies injury on the last out of the 2011 NLDS, everything changed.  Howard’s power, his best quality, was never the same and Howard was never the same.  Howard’s name will probably stick around on the ballot for a few years but he won’t end up in Cooperstown.  Prior to the 2011 injury, Howard was right there

next to Albert Pujols for best slugger in the game as he led the league in home runs twice and RBIs three times.  Besides his 2006 MVP, Howard finished in the top ten of MVP voting 5 times.  After the 2011 injury, Howard never made an All-Star roster and only hit 96 home runs from 2012-2016 compared to the 286 homers he hit from 2004-2011 along with an average that dropped from .275 to .226 in those spans.  Howard is one of the best of his time which wasn’t for a long time and that will keep him away from Cooperstown.

Statistics and research from: https://www.baseball-reference.com/