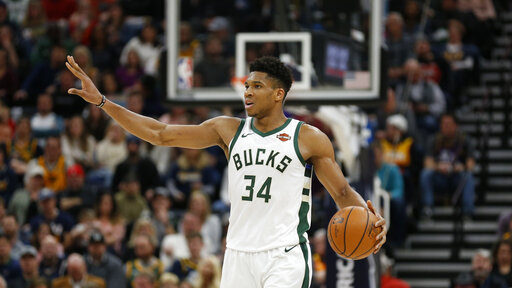 Milwaukee Bucks forward Giannis Antetokounmpo (34) brings the ball up court in the second half during an NBA basketball game against the Utah Jazz Saturday, March 2, 2019, in Salt Lake City. (AP Photo/Rick Bowmer)

With the NBA season nearly over, the hardware for the NBA awards will soon be handed out.  Will Giannis or Harden take home MVP?  Could Giannis be DPOY and MVP?  Luka or Trae for best rookie?  Here are my picks for this year’s NBA awards.

This will probably be one of the closest MVP races of all-time between Giannis and Harden.  Harden carried his team from mid-December all the way up until pretty much the end of the season.  After an 11-14 start to the season, the Rockets were 42-15 from December 11th to the end of the season with Harden averaging 38.5 PPG and 7.2 assists in that stretch.  He finished leading the league in points per game (36.1) to go along with 6.6 rebounds and 7.5 assists per game.

With Gobert being one of the best rim protectors and the length of the Greek Freak, this was another close one but I’d go with Paul George.  George led the league in steals per game and total steals (2.2 and 170) in a great year of perimeter defense.

Rookie of the Year: Luka Doncic

Another two-man race, this time between Doncic and Young.  Both were the best players on their teams and showed future stardom but my vote would go towards Doncic.  The numbers between the two are very close but in my opinion, Doncic contributed more towards the winning efforts in Dallas than Young did in Atlanta.  The Mavericks were 33-49 while the Hawks were 29-53, again not a huge difference, but the Mavericks are in a tougher Western Conference.  Win shares is an estimate of how many wins a player contributes and Doncic had 4.9 while Young had 3.3.

What a story Montrezl Harrell has been.  After making trips to the D-league and coming over to the Clippers in the Chris Paul trade, Harrell has become one of the best role players in the league.  Harrell played all 82 games and averaged 16.6 points, 6.5 rebounds and 2 assists per game.  He led the Clippers with the highest player efficiency rating along with the best box score plus/minus (4.2).

The Nets got everything they wanted and much more by trading for Russell last summer.  Russell showed everyone why he was once the 2nd overall pick after being labeled a bust with the Lakers.  The Nets finished with a winning record for the first time since 2014 and made the playoffs for the first time since 2015 with Russell leading the way.  D’Lo finished the season averaging 21.1 points, 3.9 rebounds, and 7 assists per game while making his first all-star team and lining himself up for a potential max contract this summer.

Coach of the Year: Doc Rivers

Budenholzer and the Bucks finished in 1st place in the Eastern Conference and Malone and the Nuggets finished in 2nd place in the Western Conference, while Rivers and the Clippers finished 8th in the Western Conference.  But when you compare the rosters between the teams, it’s a surprise the Clippers even made the playoffs after trading Tobias Harris.  Rivers was able to created a role for each one of his players and create a tough and scrappy team that took the Warriors to 6 games in the playoffs.  By far one of the best coaching jobs from a coach who will head to the Hall of Fame one day.

You can find out the winners on June 24th on TNT when Shaq hosts the NBA Award show at 9 o’clock.