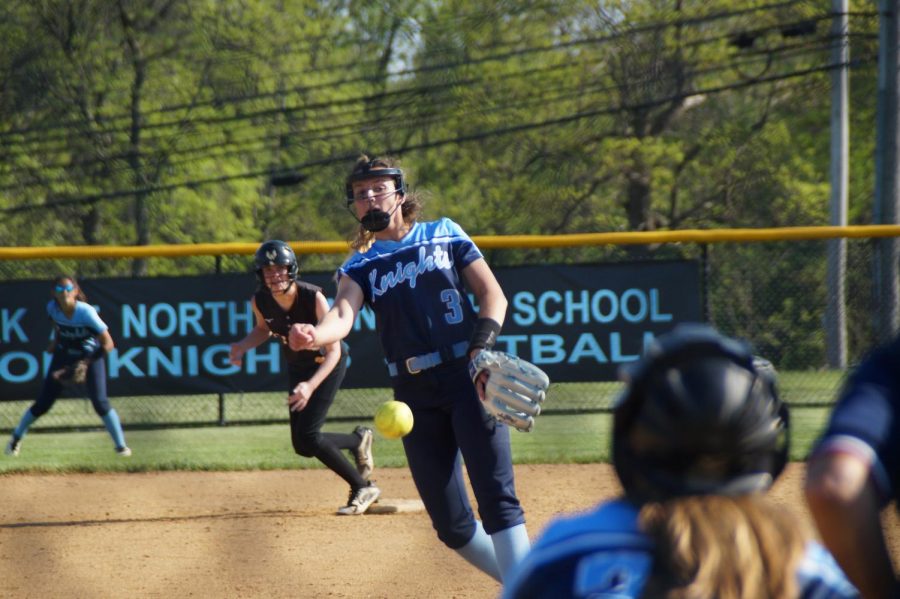 Mady Volpe was perfect through 5 and a third innings.

TOWAMENCIN- With the Knights 1 win away from a conference title, sophomore Mady Volpe had another outstanding outing in the circle to help deliver the Continental Conference Championship.

“From day one, they’ve all come out and worked really hard for this.  We got close last year.  We’ve won four out of the last five conference championships and they’re a part of three of those, which is huge.  Not too many seniors can leave North Penn and say they’ve won three championships which is huge for them,” Head Coach Rick Torresani said.

All 3 runs for the Knights came in the bottom of 3rd.  Sophomore DH Carley DiGiuseppe got the rally started with a double to lead off the inning.  Junior SS Victoria Juckniewitz reached base on an error which brought up Pietrzykoski who hit a double to score DiGiuseppe.  Next up was junior C Amanda Greaney with two runners in scoring position.  Greaney hit a double down the right field line to score 2 and gave the Knights a 3-0 lead.

Volpe had something special going on in the circle as she had a perfect game through 5.1 innings.  She finished pitching 7 innings with 10 strikeouts, 1 walk, and 1 hit.

“I had no idea.  I was just playing my game.  Changeup was working and my curveball really working too,” Volpe said on her near perfect outing.

However, it was not a continuous 7 innings as Namey came into pitch with 2 outs in the 7th.  Abby Lineman walked and advanced up to 2nd on a wild pitch.  Ella Castronuovo hit a single to score Lineman and put up the first run for the Bucks.  Volpe was put back in to pitch and shut the door to get the win.

The Knights will be back in action Thursday at home for a date with the Titans of Central Bucks South.

“South, that’s always a good game and it’s always a game that we put a little checkmark on in the schedule so we’ll be ready for them,” Coach Torresani said.