Namey and the offense back up Volpe’s complete game 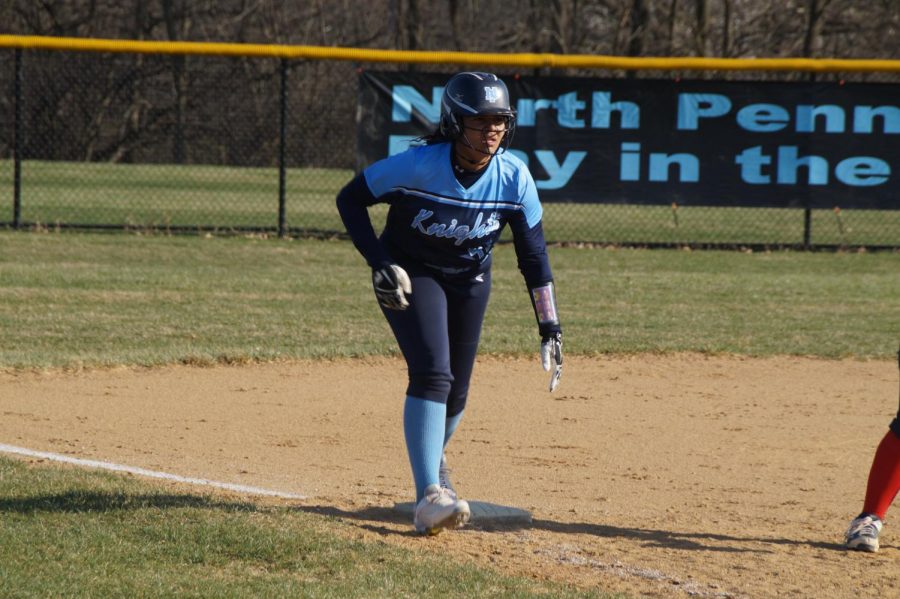 Senior 1B Elia Namey on 3rd base. She finished 3-4 with a homerun and a triple shy of the cycle to go along with 4 RBIs and 3 runs.

TOWAMENCIN- The bats for the Knights were out again putting up another 14-run outburst for the second straight day, to earn the win.

“The way they’re htting, and if they can continue it, because it’s cold.  Once it gets warmer it’s gonna go further and it’s gonna go harder, so I’m really looking forward to seeing what happens,” Coach Rick Torresani said about his offense.

The North Penn Knights (5-0) beat the CB East Patriots (0-4) 14-3 in 5 innings to get the win on a sunny Wednesday afternoon at North Penn High School.

The Patriots started the game by scoring their only 3 runs of the ball game off a three-run homer from 1B Camille Larson.

“In [Volpe’s] defense, with the wind out, I called the wrong pitch.  I should have called something off speed and the batter got right on it, hit a fastball and hit a fly ball that [the wind] just took it out,” Coach Torresani said.

But the Knights tied and took the lead off of one swing of the bat.  With the base-loaded, senior Elia Namey sent a pitch over the center field fence for a grand slam.  Namey finished the afternoon 3-4 with 4 RBIs and 3 runs while also finishing a triple shy of the cycle for the second time this season.

“The amazing thing about this team is that no matter what the situation is, we always have complete faith in our offense to pull through and that’s what went on in my head as I was up to bat.  I wasn’t nervous, I just went up and did what I would do in any situation.  Being a senior and a leader, the nerves aren’t as high as they have been in past years. When the underclassmen see us, upperclassmen, get hits and stay composed in these clutch situations they feed off of that which is why we do well, batters one through nine,” Namey said.

Senior Jamie Beer got on base with a single and worked her way around to third before scoring on a wild pitch.  The Knights took a 5-3 lead into the second inning and sophomore Mady Volpe settled in.  Volpe earned the win by giving up only 3 runs and striking out 12 in her complete game 3-hitter.

“For a sophomore to bear down like that and comeback and just shut them down after [the 1st inning], mixing her pitches up, getting twelve strikeouts, not giving them another run, was just awesome and for a sophomore, she’s grown up so much and it’s really nice to see,” Coach Torresani said.

The Knights scored three more in the in the bottom of the second off an Amanda Greaney single, a wild pitch that allowed Jordan Pietrzykoski to score, and an RBI groundout from Volpe.  The Knights took the 8-3 lead into the third.

With the last out of the third inning, Volpe got into a groove by retiring the last 7 batters she faced and 6 by way of the strikeout.

“I was just really on there and I knew what to do.  I just really had a good mental approach,” Volpe said.

The Knights will now have a week off to rest before they face the Quakertown Panthers on the road on Wednesday the 10th.

“They’re off a week, seniors are going away.  We play Quakertown next Wednesday away and they’re a good team so we’re looking forward to facing them,” Coach Torresani said.