Stark comes through in the clutch as Knights win 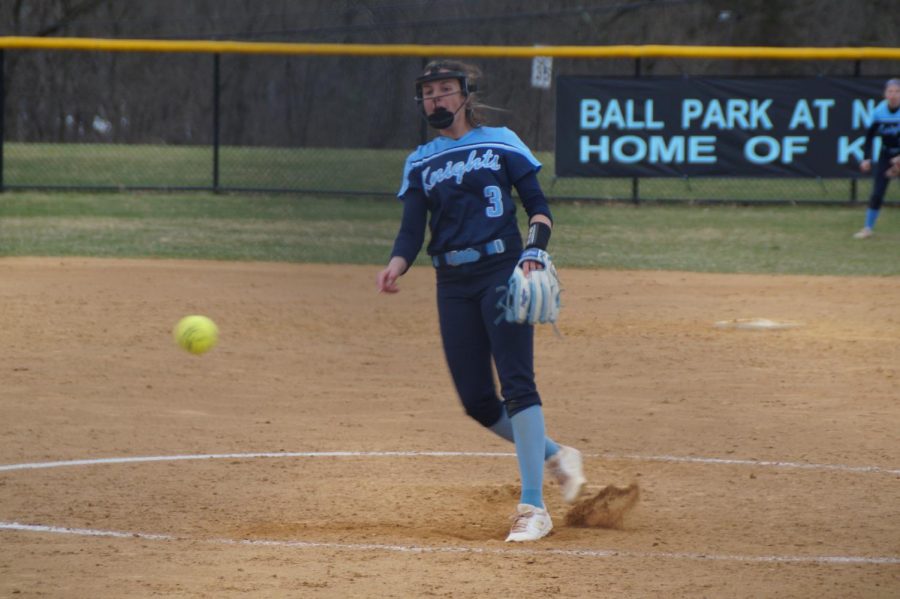 Sophomore Mady Volpe delivers a pitch in the top of the 7th.

TOWAMENCIN- Offense was not hard to come by as both teams combined for 20 runs and 26 hits.  But none bigger than the one off freshman, Lizzy Stark’s, bat in the climax of the game.

“We got out early and then they came back and that’s a good team over there and they can hit.  And other years we might had said ‘uh oh’ and then lost the game but these kids are primed and just ready to play that nothing seems to faze them,” Coach Rick Torresani said.

Sophomore, Mady Volpe, got off to a quick start as she struck out 3 batters out of the 4 faced in the top of the 1st inning.  She completed the game to pick up the win along with striking out 9 and walking only 2.

The Knights got off to a quick start on offense as well.  They loaded the bases twice to put up three runs in the first.  Senior, Elia Namey had a two-run single first and then two batters later, Volpe drove in a run on a single.  The Knights finished the 1st inning up 3-0.

The Wildcats got a run back in the 2nd inning to pull within 2.  Senior Jamie Beer and Volpe both drove in runs, for the Knights, on singles in the bottom of the frame to put the Knights up 5-1.

The Wildcats scored 4 runs in the 5th off of 4 hits and an error.  The Knights were unable to break the tie in the bottom half and the game was tied at 6.

“In my mind, I’m thinking we’re gonna prove right now whether we have it.  Whether we can just shrug that off, not get down, not got upset, and get the runs and get the hits,” Coach Torresani said.

In the bottom of the 6th, Stark came up with the bases load and the game still tied at 6.  She worked a full count and then fought off a pitch by fouling it off.  She then smacked the ball into the left-center gap for a bases-clearing double to give the Knights a 9-6 lead.

“I’ve been struggling the last two games and something just clicked and I just really came through.  It was just really big for me honestly, cause as a freshman it’s not likely,” Stark said.

The Knights never looked back after that as they went on to score 5 more runs in the inning to take a 14-6 lead into the top of the 7th.  Volpe then shut down the Wildcats in the 7th with a 1-2-3 inning to end the game.

“[Stark] coming up and hitting that double with the bases loaded in a 3-2 count, what a clutch hit,” Coach Torresani said.

The Knights will be back in action tomorrow against the CB East Patriots.

“It’s a league game.  We got to come out ready to play.  Hopefully Mady [after] the shot she took to her leg, will be able to throw.  I’m a little worried it might tighten up on her but we have Rachel [Lowry] and Rachel is a good pitcher,” Coach Torresani said.