Meiers the sole man for the diving team 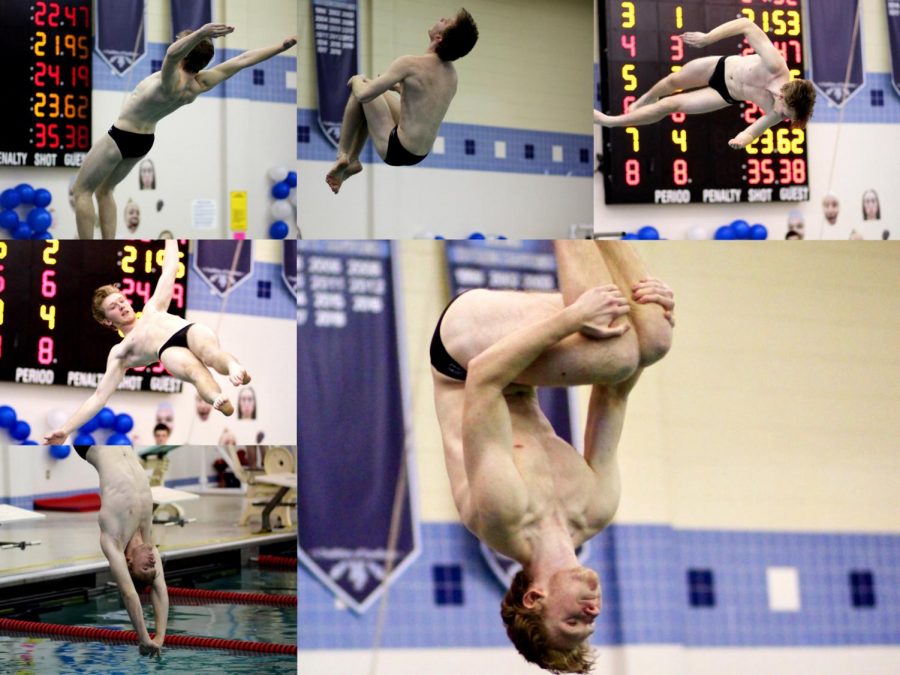 Evan Meiers dives off the board.

TOWAMENCIN- “Evan is our sole man in the sense of he’s all we got…and he’s all we need,” diving coach, Kyle Goldbacher said.

The diver Coach Goldbacher is referring to is Evan Meiers, a senior at North Penn and the only male diver on the North Penn Diving Team.

“I’m not sure why there aren’t as many male divers at North Penn because there has been in the past.  There was a time, my freshman year, where there was like six guys on the team and now I’m the only one and there are other squads, like Abington, that has a lot of successful boy divers,” Meiers said.

Meiers has had a lot of success off the diving board.  His sophomore year, he finished 5th at districts.  Last year he finished in 18th place at the state competition along with a 2nd place finish at the league championships and 5th in districts. This year he finished 6th in the district championship and 12th at states.   All these accomplishments come from hard work and lots of practice.  But sometimes, Meiers will prepare for his next meet and then be told there isn’t another male diver on the other squad to compete against.

“It’s kinda just a bummer cause I get all motivated to compete and I get in the zone and then you don’t even get to compete so it’s a little rough,” Meiers said.

When Meiers was younger, he enjoyed messing around at the pool especially off the board.  His mom noticed and had him join the Norristown High School aquatics club.  Meiers attended St. Helena school and when the time came, had to choose between North Penn and La Salle.

“I picked North Penn because I could dive with my Coach Kyle, because he’s the best coach around and he’s just taught me so much about diving and I wanted to explore my career more,” Meiers said.

Meiers has a strong relationship with Coach Goldbacher and is extremely appreciative of him.

“He’s been my coach for seven years or so.  He’s one of the best guys I know.  Really inspirational and motivating and I owe it all to him.  He’s the only reason that I’m going to Drexel for diving,” Meiers said.

Meiers is confident that next year, there will still be male divers as there are three eighth grade male divers that will most likely come up to the high school team as freshman.

“I try to coach them a little when our Coach Kyle is distracted or something and I try to motivate them through their hard times so I hope I brushed off well on them,” Meiers said.

Like he said, Meiers will continue to dive at Drexel University as he studies to become a physician’s assistant.  But for his high school career, Meiers has dived for the last time as a North Penn student and has enjoyed the journey.

“Honestly, there was just a lot of love going around on the team and everyone wanted everyone to do better and it was just pure motivation and it’s been an awesome experience. My Coach Kyle and my teammates and my past teammates have been everything to me.  They are the reason I’m successful at diving,” Meiers said.