Edelman is not a future hall of famer 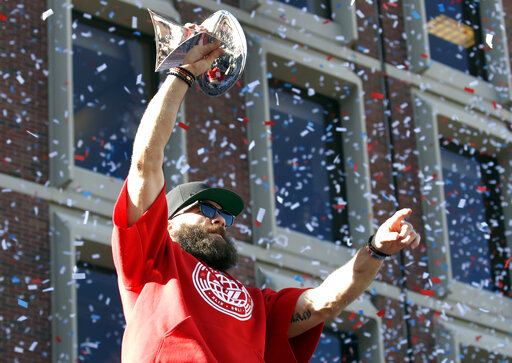 New England Patriots' Julian Edelman holds up a trophy to fans during their victory parade through downtown Boston, Tuesday, Feb. 5, 2019, to celebrate their win over the Los Angeles Rams in Sunday's NFL Super Bowl 53 football game in Atlanta. Edelman was the MVP of the game. The Patriots have won six Super Bowl championships. (AP Photo/Elise Amendola)

The Patriots, of course, won another Super Bowl and Brady got his 6th ring but #11 stole the show.  The 5’10” and 198-pound receiver, Julian Edelman, won Super Bowl MVP for his performance that saw him catch 10 passes for 141 receiving yards.  Edelman is ranked 2nd all-time in playoff receiving yards and 2nd all-time in playoff receptions.  This has a lot of people saying Edelman is a future hall of famer.  If you ask me however, Edelman is not a future hall of famer.

Everything I already mentioned is in terms of playoffs which don’t get me wrong, is very impressive.  But playoffs can’t be the only aspect of a career to put someone in Canton.  And his regular season numbers are productive and make him a good receiver.  But the Hall of Fame can’t be for good players, it’s for the greats.  Edelman has never even made a Pro Bowl yet alone an All-Pro selection.

Edelman is ranked 248th all-time in receiving yards.  Just some of the receivers ahead of him include Malcolm Floyd (ranked 227th) and Braylon Edwards (ranked 229th).  Hall of Famer Marcus Allen is ranked 244th all-time in receiving yards but the thing is…Allen was a running back.  Edelman is 32 years old so he’s not going to make any big jumps up the receiving yards list.  And let’s put this into perspective, Edelman has spent 9 seasons in the NFL but Odell Beckham Jr., who has played in the NFL for 5 seasons, is ranked 13 spots higher.  That’s because Odell is a premier receiver and a superstar in the NFL while Edelman isn’t.  Players like Odell are the type of players that deserve to be in the hall of fame.

One of the biggest discussions every year is if the Baseball Hall of Fame should elect former superstars that have used steroids into Cooperstown.  Well the NFL will have the same discussion when Edelman is on the ballot.  He was suspended for the first four games of the 2018 regular season due to PED use.  Now in my opinion, guys like Barry Bonds and Roger Clemens should be in the hall of fame even though they have used steroids.  But at the end of the day, they are not and for the same reason, the NFL should not allow steroid users into Canton.

And let’s not forget who’s throwing Edelman those passes.  I mean Tom Brady has been paired with average receivers, except for a few, for his entire career.  But Brady is so good at what he does and leading an offense it doesn’t matter who his receivers are.  If Edelman had not played for New England, I’m not so sure he would be as successful as he his.  Look at former Patriot receiver, Deion Branch.  In his first four years of his career, Branch played for New England with Brady at the helm.  Branch caught 61.2% of his targets in those years before he went to Seattle and his catch percentage dropped to 55.6%.  Then Branch was traded back to New England in 2010 and for the rest of that season his catch percentage was 64.9%.  So, Brady has a lot to do with how successful his receivers are.

It would be a huge mistake to put Edelman in the hall of fame.  He’s a really good receiver and the Patriots would have a lot of trouble winning the Super Bowl this year if they didn’t have Edelman.  But like I said before, the hall of fame is for the greats and Edelman is not a great receiver.