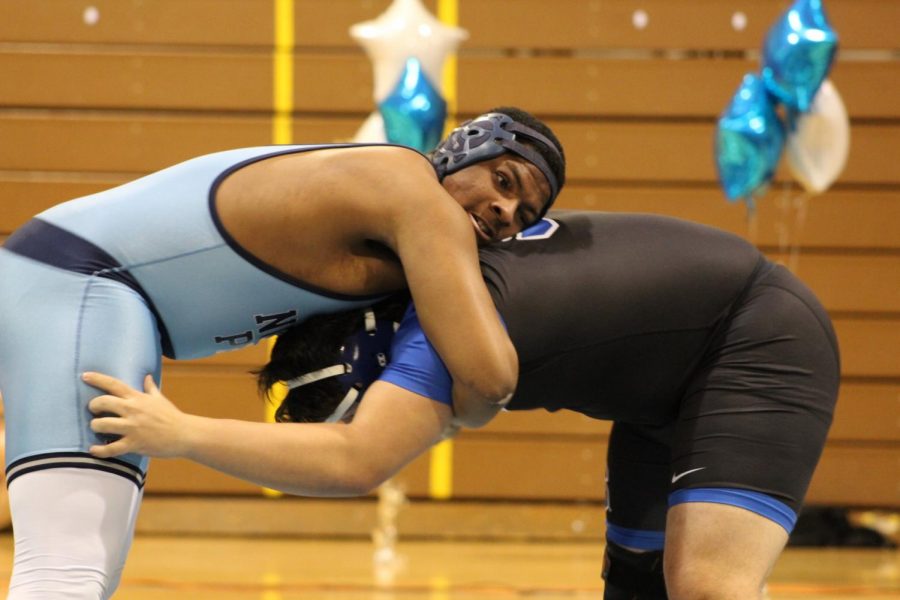 Amir Pickens wrestles for the final win of the match.

TOWAMENCIN- It was a memorable night in the North Penn gymnasium as the Knights came out with a dominant win on senior night.

“We’re gonna miss these guys.  They’ve worked really hard over the last four years and it’s a bit of a sad night, especially for them with their last home match in the North Penn High School gym,” Head Coach Robert Shettsline said.

“They had a lot of forfeits and they always help.  Our guys worked hard and we’ll be ready for the districts,” Coach Shettsline said.

As Coach Shettsline mentioned, forfeits helped as there were 8 of them.  The night started with one of them, as freshman Dylan Reinhard received a forfeit in the 106-pound match.  The Titans evened up the score at 6 with a pin from freshman Nick Russo in the 113-pound match.  The Knights received three straight forfeits in the 120, 126, and 132-pound matches.

“My team needed a pin.  It was a big moment for us.  I actually pinned [South’s Ben Bernhauser] this last weekend but I knew I couldn’t take him lightly so I had to get the job done,” Pickens said.

The Knights will be back in action February 6th, for a rivalry matchup against the Souderton Indians.