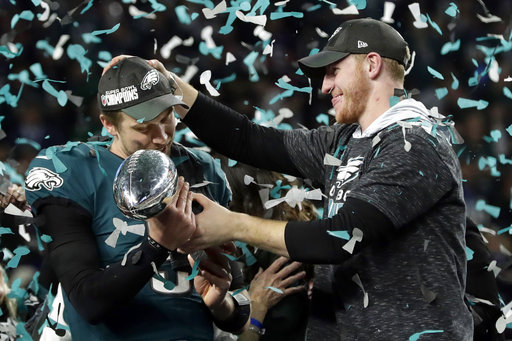 The Eagles came into the season with a quarterback quandary and left the season with an even bigger one. Nick Foles took over for the injured Carson Wentz when the season looked to be over but somehow and someway, Foles took the Eagles into the playoffs and into the divisional round. The Eagles could keep both Foles and Wentz on the roster for 2019, but the chances of that are very slim considering the Eagles have one of the worst salary cap situations in the league. Doug Pederson has already made his decision on who the quarterback of the future is.

“Carson is the quarterback going forward. In Nick’s case, listen we would love to have everybody back throughout the roster, but as I’ve said many many times, it’s not about one guy, it’s about the team and we’re going to do what’s best for the team,” Pederson said in response to the first question he received at the first press conference of the offseason.

A lot of people support the decision to move forward with Wentz, and I totally get it. He was about to win the MVP before his ACL injury. As a lifelong Eagles fan, I’m a big fan of Wentz. If he wasn’t on the team last year, the Eagles would have still been without a Super Bowl Championship. But if I were the GM of the Eagles, I would choose Foles.

There are a lot of different reasons I would move forward with Foles. Let’s start all the way back to week 14 of 2012 where Foles got his first career win as a starter. And he got his first win with the game on the line. As time expired in the 4th quarter against the Buccaneers, Foles threw a game-winning 1-yard touchdown pass to Jeremy Maclin to get the win. The point of this is that Foles has been coming up clutch since he came in the league. Foles has 12 game winning drives which is ranked 20th among active quarterbacks. That might not sound impressive, but for a player who has been a backup quarterback since 2016, Foles received a comparison to a future hall of fame quarterback, from a hall of fame quarterback, about how clutch he is.

“No disrespect at all to Carson Wentz. I think he’s already proven that he’s a great quarterback. Totally different than Nick Foles. Nick Foles, to me, is more of a Brady-esque type quarterback. Very limited in what he can do but very, very good in what he does. He’s a pure pocket passer and he’s great at dishing it out, and he’s proven that he’s clutch. He did it this past week, he did it last year, he’s done it time and time again, and he’s proven that he can win the big games. That, I think, is what we have to look at, for the Eagles, or anyone in a similar situation. It’s about winning, it’s about being clutch, doing really what you expect your players to do. And he does it as well as anyone,” hall of famer Brett Favre said on Sirius XM’s NFL Radio.

Let’s not forget that 2013 Pro Bowl season. Foles took the reins of the Eagles and had a spectacular season. He threw for 27 touchdowns compared to only 2 interceptions which is ridiculous. He also had the best quarterback rating that year and averaged 14.2 yards per completion which led the league to show NFL fans he has the talent to be a franchise quarterback.

I know what happened when Foles was with the Rams, but look at what history has shown.  Not one quarterback has been successful with the Rams under Jeff Fisher. Former 1st overall pick Sam Bradford didn’t work out. Then, Foles didn’t play well for the Rams. Case Keenum didn’t play well for the Rams and turned out to be a pro bowler with the Vikings after he left. And then the Rams drafted Jared Goff 1st overall, and under Fisher, Goff threw 7 interceptions to 5 touchdowns and went 0-7 as a starter. Fisher was fired, all of a sudden Goff was a Pro Bowl QB. So, in my opinion, Foles has always been a quarterback that can perform at high levels consistently as long as he has the proper coaching staff around him.  Look at what happened in his first season after he left the Rams and played for head coach Andy Reid who coaches quarterbacks as good as anyone. He played two games for the Chiefs and they won both as Foles threw for no interceptions, three touchdowns, and had a 65.5% completion percentage.

Everyone knows about the Super Bowl run Foles went on after Wentz’s injury, but just take a look at the teams Foles has beat in the playoffs.  He beat the reigning NFC champions at the time, the Atlanta Falcons. Then he completely blew out the number one defense in the NFL, the Minnesota Vikings. And in the Super Bowl he was named Super Bowl MVP against Tom Brady who threw for 505 passing yards and put up 33 points. If anyone had said before the Super Bowl that the Patriots would put up 33 points, Brady would throw for 505 yards, and the Patriots would hold the lead at one point in the 4th quarter, most would have said the Eagles would have lost that game. This year to just make the playoffs, he beat the #2 seed Rams and the Texans who won the AFC South crown. Then he beat the number one defense this year, the Chicago Bears at Soldier Field and was most likely a reception away from beating the Saints in the Superdome.

I was watching a clip from The Herd with Colin Cowherd and they showed a graphic on the screen that showed that out of the 8 quarterbacks that made the divisional round of the playoff this year, Nick Foles has the best passer rating when he is blitzed.  The offensive line will most likely look very different next season with Jason Peters and Jason Kelce considering retirement and Brandon Brooks out for most of the 2019 season, if not all of it. So, whoever is under center next year needs to be able to beat the blitz.

You could say Wentz is better equipped for a weaker o-line, and if we were still in his MVP season, I would agree. But we’re not, and a lot has changed since then.  He came off a bad ACL and LCL injury that will most likely force him to wear a knee brace for the rest of his career. In Wentz’s young career, he had the highest sack percentage of his career this season, so there is a chance he might not be able to escape the pocket like he used to be. I hope Wentz bounces back to MVP form and has a great career, but the risk is there.  Especially considering the fact that he got injured at the end of two consecutive seasons and was injured as a college player. If you’re the Eagles, are you sure you want to put an injury prone quarterback behind a perhaps weak offensive line?

This brings me to my next point: Wentz is coming back from a major knee injury and now a back injury. Everyone expects Wentz to return to playing like he did in 2017, but the reality is, there’s chance he doesn’t. I hope he does and has a successful NFL career, but like I said before the risk is there. You also have to remember that Wentz has not played one playoff snap yet. Quarterbacks can play really well in the regular season, but the playoffs are completely different and the Eagles are a winning team now that should value Foles’s playoff experience. I’m not saying Wentz can’t get it done in the playoffs, but there are question marks.

It’s a short resume of Wentz, but let’s look at year three.  After the second Cowboys game, the season looked like failure and the Eagles were going to miss the playoffs.  And it’s not all Wentz’s fault, the defense took a while to get back to championship form, the team had lots of injuries and because of that, there was no run game.  But some fault does have to go to Wentz. I truly believe the Eagles have one of the best receiving corps in the NFL, but Wentz hasn’t utilized the offense properly like Foles did. It’s pretty clear that tight end Zach Ertz is the number option every time Wentz drops back to throw. With Foles, he takes what the defense gives him and throws to the open man. Look at the game against the Texans, where Foles targeted 10 different receivers which is more than Carson Wentz did any game this season. And I don’t know, maybe this is just me, but I think the offense looks a lot better with Foles at the helm instead of Wentz. I see more big plays, like the 83-yard pass to Nelson Agholor for the Eagles longest play of the season. The offense line had a fire lit underneath them when Foles took over and returned to one of the best offensive lines in football. And somehow the defense looks better. They allowed the Eagles to win against the Rams and Texans, who were division leaders, by slowing both offenses down after they allowed 48 points to the Saints and 576 total yards to the Cowboys earlier this season.

I understand the Eagles traded a lot to get Wentz and moving on from the 2nd overall pick after three seasons may not be ideal, but the Eagles should at least listen to offers for Wentz. I’m sure there is a team out there that would at least trade two first-round picks and maybe more picks on top of that.  This would help the Eagles salary cap situation a lot. They would have more opportunities to draft players to replace the free agents that aren’t going to return for next season and draft solid backups for a team that has been injury plagued in two consecutive seasons. Trading Wentz also saves the Eagles from spending record money when it’s time to extend Wentz. If Jimmy Garoppolo can get a 5-year and $137.5 million contract, how much do you think Wentz will sign for? I’m not saying the Eagles need to trade Wentz but they should at least entertain the idea.

Foles deserves to, at the very least, battle for a starting job in Philly. He has proved that he can win you football games and he does it on big stages. There is a lot of risk with Wentz for an Eagles team that is ready to win now. And it’s not like Foles only has a few years until retirement.  He is 29 years old and to put that in perspective, Russell Wilson is 30 years old, and Cam Newton is 29 years old. There is a possible future with Foles in Philadelphia which most likely, fans will never see.