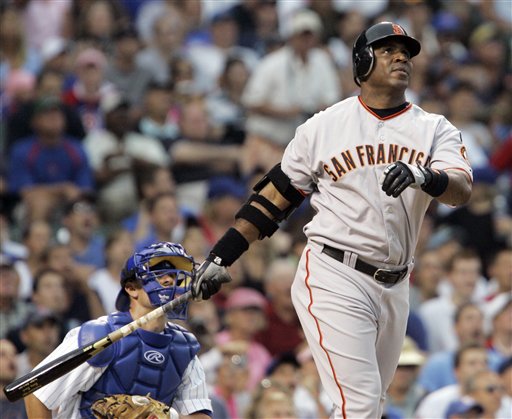 San Francisco Giants' Barry Bonds watches his home run during the second inning of a baseball game against the Chicago Cubs Thursday, July 19, 2007 in Chicago. It was his 752nd career home run. (AP Photo/M. Spencer Green)

The Hall of Fame will soon announce the class of 2019 that will be enshrined into Cooperstown and have their legacy live in on forever for their contributions to Major League Baseball.  This year the ballot adds Mariano Rivera, Roy Halladay, Miguel Tejada, and Todd Helton just to name a few.  Some of the players who have been on the ballot for several years include Edgar Martinez, Fred McGriff, Barry Bonds, and Roger Clemens.   If I was one of the baseball writers voting, here is who I would vote for.

Rivera is clearly going to be a first ballot hall of famer and only needs one reason to be a hall of famer.  He has the most saves in MLB history.  Rivera finished his career with 652 saves and is regarded as the best relief pitcher of all-time.  The 13-time all-star spent his entire 19-year career with the Yankees and won five championships with them, including in 1999 when Rivera was named World Series MVP.

Halladay was one of the best, if not the best pitcher in baseball throughout a majority of his career.  Halladay won two Cy Young awards, one in each the NL and AL, and it was 7 years after his first Cy Young award that he won his second.  This shows the longevity Halladay showed in his 14-year career that allowed him to make 8 all-star rosters.  Doc’s best moment was in the 2010 postseason when he threw only the second no-hitter in postseason history.

Martinez at the time he retired was the best designated hitter ever and the award given to the best DH every year is called the Edgar Martinez award.  For me it’s surprising that he hasn’t already been elected to the hall of fame but as he enters is last year of eligibility on the ballot he should get in with a last year push.  Martinez is a 13-time all-star, 5-time silver slugger winner, and a 2-time AL batting champion.

The case for these four is the same.  Bonds retired as the home run king, a 7-time MVP and probably the best hitter of all-time.  Clemens is a 7-time Cy Young award winner, the 1986 MVP, and won the pitching triple crown twice.  Sosa hit the 9th most homeruns of all-time and was the 1998 MVP.  Ramirez is a 12-time all-star and has led the league in each triple crown category once.  Their accomplishments and achievements make them first ballot hall of famers but they aren’t because of their steroid use (Ramirez is the only player out of the four to admit steroid use).  I don’t think their decision to participate in steroid use is okay and I think it is a disgrace to the sport but at the end of the day, the MLB Hall of Fame is a museum.  And by leaving out these four players, a big part of baseball history will be missing.  So, for that reason, I would vote for them.

Walker enters his 9th year of eligibility and at this point, the only way he’ll make it in to the hall is if the Today’s Game Committee elects him in 2 years.  However, Walker gets my vote and as he was a premier hitter in the MLB.  The 1997 NL MVP was a 5-time all-star, 3-time MLB batting champion, 7-time gold glove winner, and a 3-time silver slugger winner.  His career totals include 2,160 hits, 1,311 RBIs, and a .313 lifetime batting average.

Vizquel was only a 3-time all-star but his numbers and near perfect defense at the shortstop position get my vote.  He won the gold glove award 11 times including 9 years straight from 1993-2001.  If you compare Vizquel to first ballot hall of famer Ozzie Smith, Vizquel belongs in the hall.  Vizquel has more hits, homeruns, and RBIs, along with a higher OPS, and a higher batting average.  Vizquel belongs in the hall of fame.

Now these are the players that I would vote for.  There’s no way all of these guys would get in and I think only two will join Harold Baines and Lee Smith (elected by the Today’s Game Committee) in July for induction weekend.  Those two are Edgar Martinez and Mariano Rivera.  We’ll see how well Halladay does in his first year of eligibility but I don’t think they will get in on the first ballot.  There is not enough support behind voting the steroid users in yet and there might never will be so Bonds, Clemens, Sosa, and Ramirez won’t make it.  Walker and Vizquel are still far from making the required 75% of votes.  Tune into MLB Network on January 22nd for the official announcement.