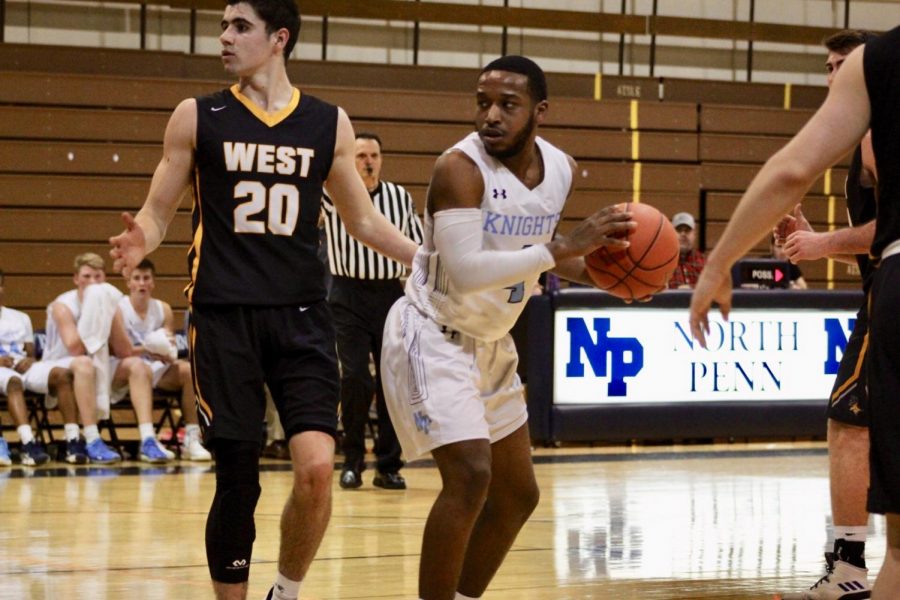 Gallery|20 Photos
Marissa Werner
Mciver looks for an open player to pass to.

TOWAMENCIN- Back and forth, shot for shot.  The Knights and Bucks battled throughout the entire game and when crunch time approached, the Knights shooting did not fail them.  They shot 4/5 from behind the arc in the 4th quarter to close the game out and send the fans home happy.

“I thought we really got after them defensively, we were able to create some turnovers and that helped us on the offensive end,” Head Coach John Conrad said after the game.

Junior Mike Chaffee put the first points of the night up on the board with a three-pointer but the Bucks took the lead with 5:04 left in the first quarter thanks to a three from Mike Manari.  Later, Manari stole the ball on back to back North Penn possessions and made transition layups to widen the lead up to 9-3 for the Bucks.  Chaffee made another three with 10 seconds left and sent the game into the 2nd quarter with the Bucks up 19-16.

Senior Tali McIver tied the game up thanks to a three-pointer of his own with 6:24 left in the second quarter.  Manari broke that tie after he made layup and then a real battle for the lead broke out.  Senior Chris Caputo made a jump shot and put the Knights up 22-21.  CB West’s Connor Briece went 2/2 at the free throw and reclaimed the lead for the Bucks.  Then Caputo made a three to give the Knights a 2-point lead but right after that, Danny Miller tied it at 25.  Manari made a layup for the Bucks and gave them a 27-25 lead into halftime.

McIver gave the lead back to the Knights after a layup and the score was 30-29 with 5:04 left in the third quarter.  Both teams went scoreless for the next 2 minutes and 22 seconds until Manari made a layup to break the scoreless run, but also gave the Bucks a 31-30 lead.  The Knights tied the game at 33 thanks to a three from freshman Joe Larkins off an assist from

McIver.  Then the Knights retook the lead after junior Kolby Barrow made a layup out of the post.  The Knights entered the final quarter up 35-33.

Jack Neri tied up things again for the Bucks off a layup but Chaffee did not let it last for long as he made a three to put the Knights up 38-36.  The Bucks eventually went up 40-38 but senior A.J.  Mitchell tied the score at 40.  The Knights didn’t look back after that.  Caputo and McIver made back to back threes and then McIver put the finishing touch on the game with a layup as the Knights held on to the lead to secure the win.

“We had the momentum, the crowd was hyping us up so we just took advantage it,” McIver said about the 4th quarter run.

The Knights will be back in action on Friday night at home for a date with the CB South Titans.