Pulisic move not only affects Chelsea and the Premier League but also the US’s future in soccer. 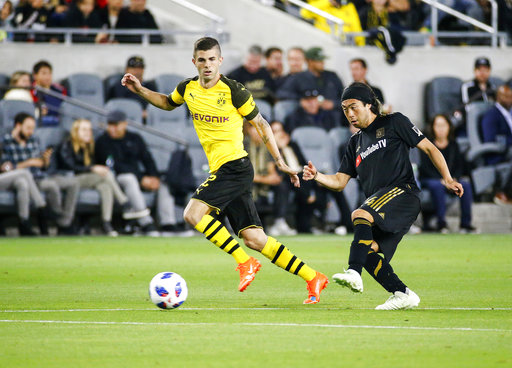 David Czekaj, For The Knight Crier

Over 3,800 miles from his birthplace in Hershey, PA, Christian Pulisic found a new home in Dortmund, Germany.  Burning down the wing in Signal Iduna Park, Pulisic has made a name for himself with his blistering pace, quick feet, and vision. After moving to Dortmund at 16, he quickly showed his quality, scoring 10 goal and assisting on 5 in only 15 youth level games.  Now Pulisic will begin a new chapter, this one in England. The 20-year old, Pulisic, will be joining Chelsea after a $73 million transfer which will allow him to compete at one of the highest levels in soccer in the Premier League.

At only 5 ft 8 in, Pulisic’s game relies more on speed and vision than physical strength, and in Germany he is mostly used as a winger, although he can be used in an attacking midfield role. 2015-2016 proved to be Pulisic’s breakout season, making substitute appearances before earning his first start in February, and scoring his first goal in April of 2016. Scoring his first goal in the Bundesliga at 17 years and 212 days old, Pulisic holds the record for the youngest non-german to score in the Bundesliga, and the 4th youngest overall. He also holds Borussia Dortmund’s record for youngest goalscorer in the UEFA Champions League, the continents premier competition.

Over the next 2+ seasons, Pulisic went on to contribute 15 goals and 24 assists overall for Dortmund, solid stats for a player whose game is not centered on scoring goals, but making chances for his teammates.

This past season, Pulisic lost his spot in the team to English sensation Jadon Sancho, who signed from Manchester City for a mere $10,000,000 this past summer transfer window. Sancho already racked up 7 goals and 8 assists this season, and with the American’s contract set to expire in 2020, Dortmund director Michael Zorc pulled the trigger on a $73 million bid from Premier league side Chelsea. Pulisic was immediately loaned back to Dortmund for the remainder of the season, as Dortmund seek to win the Bundesliga for the first time since the 2011/2012 season.

Chelsea seems to have slightly overpaid for Pulisic, who was on an expiring deal and had lost his spot in the squad, but he does fill a need for the Londoners. Star Eden Hazard is rumored to favor a move to Real Madrid, and wingers Pedro and Willian are on the north side of 30. Pulisic looks to fit with Chelsea manager Maurizio Sarri’s attacking style, dubbed “Sarriball”.

“It’s a privilege to have signed for such a legendary club and I look forward to working hard towards being a contributor to their team of world class players.” Pulisic said.

Chelsea doesn’t have a great track record for giving young players opportunities, namely Kevin De Bruyne and Mo Salah, have left the clubs supporters wondering “what if” over the past half decade. Pulisic will hope to buck that trend, with the personnel situation at Stamford Bridge being anything but certain, and is certainly in need of new blood.

Pulisic will look to turn a new leaf for the United States, after missing out on the 2018 World Cup in embarrassing fashion, losing to bottom feeders Trinidad and Tobago to miss out on qualification. He became the youngest US captain ever at 20 years and 63 days in a friendly loss to Italy, and will hope to be the face of the next generation of Americans to compete in Europe’s top leagues. Fellow American youngsters abroad include Josh Sargent, Weston McKinnie, and Timothy Weah, all who will seek to right the ship and qualify for the 2022 World Cup in Qatar.

It’s definitely an interesting move for Pulisic, who will be tested by the superiority of the Premier League compared to the Bundesliga, and American fans should be excited to be able to see their country’s best player more consistently, as the Premier League has a widely broadcasted TV deal with NBC.