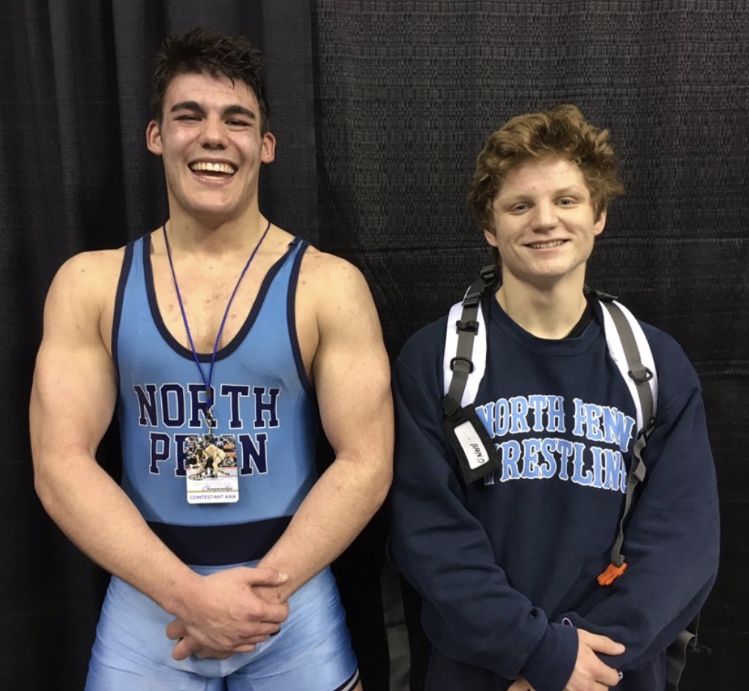 Ryan Cody and Patrick O'Neil are all smiles after the State Championships, bringing home 8th and 7th place medals respectively.

Three North Penn wrestlers, wrestled their way to the PIAA State Championships in Hershey, PA on Saturday March 10th. Out of the three athletes, senior Ryan Cody placed 8th in the 285 pound bracket and junior Patrick O’Neil placed 7th in the 160 pound bracket. Senior Owen Versepy did not place in the 220 pound bracket, but he did accomplish his 100th career win to end the season.

“The wrestlers did really well especially since they were all in pretty tough brackets. We prepare the wrestlers pretty much the same every year. We give them a little rest before states. They know how to wrestle, they have all the mechanics, so we do just fine tune them at the end. We tell them to keep it basic because basic is what got you to states. You don’t have to do anything fancy, don’t make up any moves, just keep doing the same thing,” said Head Coach Robert Shettsline.

O’Neil was the number one seed from the South East, giving him a bye in the preliminary round. In the first round he lost to the South West number two seed, Gerrit Nijenhuis from Canon-McMillan High School. O’Neil was then placed into a losers’ bracket consisting of 6 rounds.

“I think i did really well but can definitely improve. I think that I was very prepared for the competition and that is what helped me succeed. It feels really good that I earned a medal because it shows that all the work I’m putting in is paying off,” said Patrick O’Neil.

In the losers’ bracket, he won his first 3 rounds against Ray Martin from W.C Henderson High School, Mikey Lewis from Bethlehem Catholic High School, and Hunter Wright from Clearfield High School. In the 4th round he lost to Jacob Burgette from Scranton High School, putting him in a position to be wrestling for 7th or 8th place in round 6. O’Neil beat Ethan Baney from South Western High School for a 7th place finish in round 6.

“He has a lot of drive. He is already going to Nationals in two weeks in Virginia Beach. Since Pat wrestles over the summer, I think the other wrestlers can see how important it is to continue to wrestle over the summer. I’m sure Patrick is already on the right foot, and he’ll probably end up getting a scholarship. College coaches will definitely be looking at him,” said Coach Shettsline.

Cody was also the number one seed from the South East giving him a bye in the preliminary round of his bracket. He lost in the first round to Ryan Stewart from Warwick High School, which placed him in the losers’ bracket.

“I am happy with getting a medal this weekend and finishing my senior year at Hershey. I believe the hours of practice and preparation helped me succeed. It felt really good to know you belong with some of the best in the state, and to achieve the goal you set out of in the beginning of the season,” said Ryan Cody.

Cody had a bye in round one for the losers’ bracket, but won rounds two and three to Lee Holbert from Strath Haven High School and Nick Cooper from Bensalem High School. In the 4th round Cody lost to Gerald Brown from West Mifflin High School, placing him in a position to be wrestling for 7th or 8th place in the 6th round. Michael Leyland from Roman Catholic High school won round 6th, putting Cody in 8th place.

“Overall it was a good weekend. We are very proud of our boys. It’s nice to get two medals at States. We always want to help them achieve their goals and go as far as they can. Even if we attain those goals, we reevaluate and try to have higher goals for next year. Their were great performances and many goals accomplished this weekend,” said Coach Shettsline.