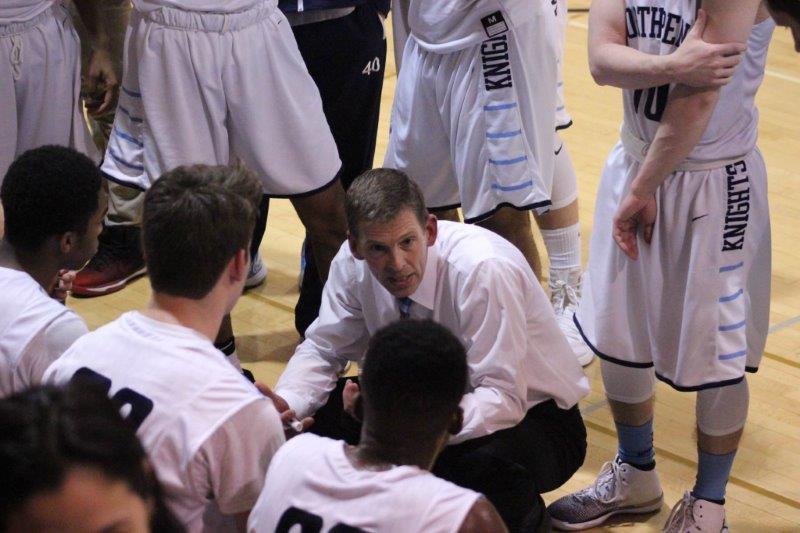 NPHS basketball coach John Conrad talks to his team during a recent conference game at NPHS.

Being a high school coach is not an easy task. Having to develop young men or women as both an athlete and student, while dealing with the hardships that come with adolescence is a task that contains no true handbook. The relationship between a high school coach and a student-athlete is crucial. High school is when athletes start to decide if they want to pursue playing at the next level, which makes a coach a very important person in a high school athlete’s life.

Some athletes believe the type of communication between coach and athlete is most important when thinking of a good high school coach. The way an athlete talks to a coach is not as controversial because of simple respect that a child should have to an adult. However, a coach’s way of communicating, whether it it yelling or one-on-one conversations, could make or break an athlete’s mentality.

“A good coach in my opinion gets their players/team to believe in themselves. They are also good communicators. They can coach in such a way that while they may yell and point out problems in someone’s game, they also build each player’s confidence,” said junior cross country runner, soccer, and lacrosse player Jack Johnston.

Other athletes care less about the coach’s communication, and more on the coach’s ability to spot the skills of each athlete and help them become a better athlete.

“A good coach is defined by how well they identify the individual’s strengths and weaknesses, and then how they use that to improve the team as a unit. The coaches have a direct effect on the athletes. I think that they contribute to their attitudes, their skills, and their success, on and off the court,” said senior basketball player Jess Huber.

Field hockey Captain senior Seema Sajan would agree that a coach’s ability to improve the athlete’s skill makes them good. Other than skill, she feels a high school coach has the duty of teaching the common lesson for every athlete that winning isn’t everything, but loving the sport is most important.

“A good coach is someone who knows your capabilities and pushes you beyond them. They listen to their players and their opinions, but ultimately do what is best for the team. They emphasize the importance of having fun on the field rather than always focusing on winning. In addition they make sure to do everything they can to prepare the team for their opponent, whether that means scouting the other team or conducting specific drills. A good coach has a big impact on their players. They are a big factor in growing the athlete’s passion for the game and making him/her want to work even harder to get better,” said Sajan.

As Sajan touched on, a good coach takes a lot of time out of his or her daily life to prepare for practices and competition. A high school coach that dedicates time to his or his student athletes and works to improve the athlete as well as him or herself as a coach are the qualities of an efficient coach, to junior soccer player, and track runner Matt Gain.

“I think a good coach is someone who dedicates more time outside of the practices you see them to help you advance in your sport. [The North Penn Track Coaches] put many hours outside of practice making workouts, researching new ways to do things and better our team and program all the time,” said Gain.

For Head Coach Shannon McCracken of the field hockey team, she finds connecting with the athlete’s on an emotional level to be most important to her. To her winning isn’t everything, but more importantly having a positive atmosphere for the team is most important.

“Truly caring about your players as individuals is extremely important. I want my players to grow into strong women and I truly care about their success in the classroom and in their lives in addition to the playing field. I want my players to have a great experience playing field hockey for North Penn High School. The wins and losses won’t be remembered as much as the feeling you get playing the sport you love with your best friends. I try to create an atmosphere that balances hard work, growth, and enjoyment,” said Coach McCracken.

Setting goals and working on skills is important to Coach McCracken, but she values the student portion in student-athlete. At the end of the day her main purpose on the field is to develop her team not just into stronger players, but stronger young ladies. Head Coach Jay Jones of the boys track and field team feels similar on the emphasis of student in student athlete, and on the positive atmosphere

“To me high school is not all about winning. High school is about mental and physical developments of the young athletes. Either way, I do believe there are some things that are consistent: being fair, it’s very difficult to be fair with young athletes because every situation is different. Although track and field is an individual sport, I think their individual actions have consequences and ramifications for the entire team. We have relays which are huge. We have kids on the team that bring a certain positivity to the team that could be contagious or infectious. A kid with a negative attitude could bring your team down attitude wise. Although you may compete individually, either in an individual event or individually among a relay, it’s still well within that team concept. How I handle it, goes back to being fair. I don’t treat everybody the same exact way, but if you talk to my athletes I’m extremely consistent with rules. I don’t just go with the fastest 4 for a relay, you absolutely earn the privilege to be on a North Penn relay,” said Jones.

Being a student athlete in college, Coach Jones puts some of the lessons he learned into consideration while coaching, but also can understand on a personal level the impact that a coach has on a student-athlete.

“As a coach I look for improvement because everybody does not come in with the same work ethic, personally I struggled with work ethic in college just because expectations were not clear to me of what was necessary. I don’t think as a high school coach you always realize how your daily activities impact these young men, but they have a huge affect. I can’t say they have the same impact on every single one: my high school coaches, I would not be here today if it wasn’t for them,” said Jones.

Many athletes and coaches would agree that the impact of coaches at the high school level can be great on a physical level, but more importantly an emotional level. If going to a sport becomes a second “job” to athletes, where the “boss” is a worst enemy, athletes lose interest.

“I believe that coaches impact an athlete’s attitude towards their sport greatly. Having a hard working and determined coach will help the athlete become more hardworking and try to get better in their sport. Coaches can either make you hate a sport, or love it even more,” said Gain.

With high school comes enough stress on a student and with sports on top of academics, some athletes may feel overwhelmed by this. Having a coach that takes the fun away from an extracurricular activity can be the cause of even more stress for the student-athlete.