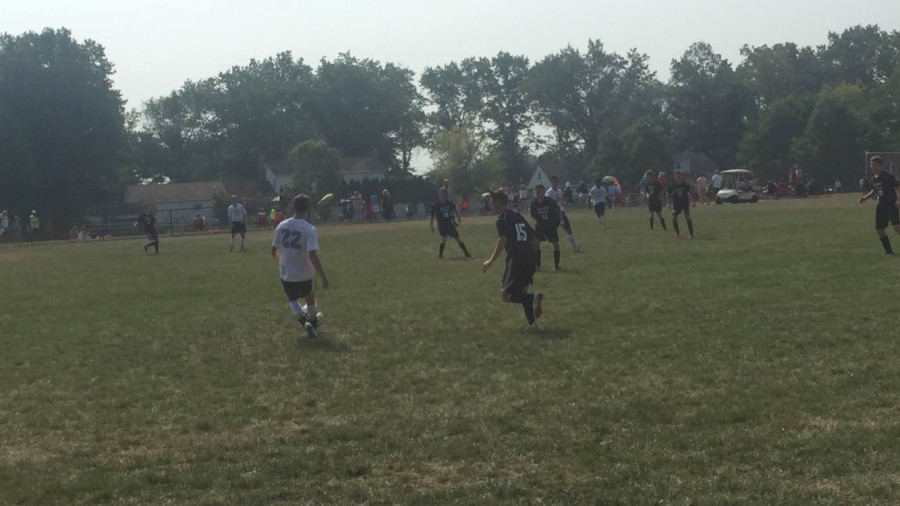 TOWAMENCIN – The Knights’ soccer team wasted no time in getting their season off on the right foot, as they dominated the Archbishop Wood 3-0 at home their season opener.
“Last year, they actually beat us away,” said Coach Paul Duddy, “so it was nice to get back the win we did not get last year, especially in front of our home crowd. It was a good way to start off the season.”
After a rather sluggish start to the game, the Knights finally opened up the scoring at the 36 minute mark. Junior striker Mike Kohler dribbled past a defender in the box and sent a low cross to the middle. When the defender failed to clear the ball properly, Kohler jumped at a chance and tucked it in near post.
Rejuvenated by the goal, North Penn soon doubled the lead. Off the NP corner kick, the ball bounced around the Wood’s box. Senior midfielder Owen Nakatani fought off the defenders and blasted the ball into the back of the net.
“We picked up the intensity after the first goal,” said Mike Kohler, “after that, we were able to find the second one. It definitely changed the game.”
Carrying the momentum, the Knights scored again soon after the second half started. Chasing a long corner, senior Liam Parker jinked past a defender and sent in a cross, finding senior striker Musa Sheriff who headed the ball in.
While the offensive fury gave them a three-goal cushion, the defense was also rock solid, keeping a clean slate to end the game.
“The defense will be the key this year,” said Owen Nakatani. “We have a great keeper in Jordan Katz, and our defense is as solid as ever. I feel like we are going to shut out more teams and win lot more games.”

With the game in check, the Knights gave some of their starters a break while utilizing some bench members, giving many players valuable experience that they will likely need later in the season.
“You can’t play only eleven,” said Coach Duddy. “We usually use five or six subs, but today, we were able to use lot more. Just giving them some minutes will give them experience and confidence that they can play against anybody.”
Meanwhile in JV action, the game ended in a 1-1 tie, with the goal coming from Matt Farrell, assisted by Richard Brophy.

The Knights are back in action Wednesday, September 9, at home against CB South.