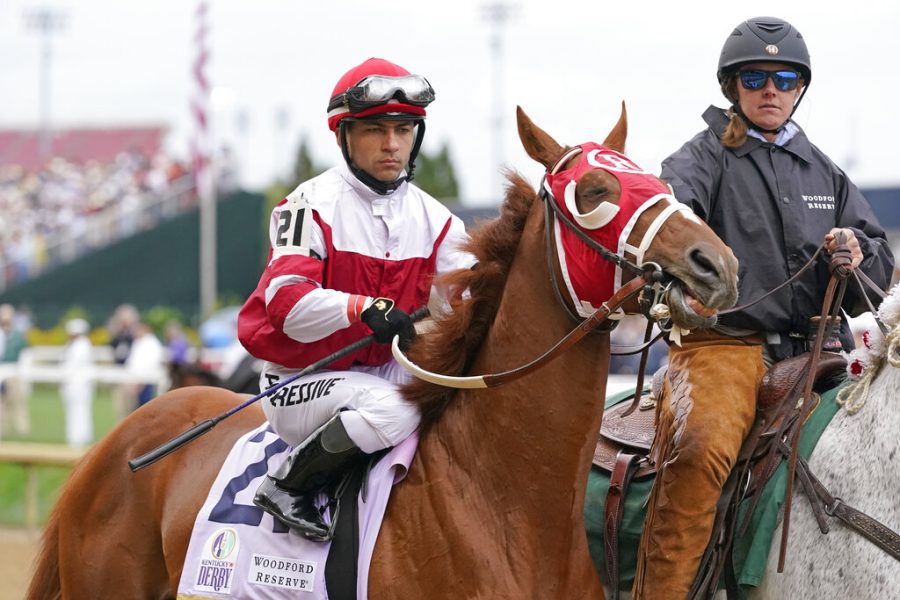 Sonny Leon rides Rich Strike (21) onto the track for the 148th running of the Kentucky Derby horse race at Churchill Downs Saturday, May 7, 2022, in Louisville, Ky. (AP Photo/Mark Humphrey)

They say it is the best two minutes in sports every year. It is a day full of parties, crazy hats, and betting. Everyone knows the horse that takes it home, and the honor is not only for the horse but also for the owners and jockeys. This incredible event is called the Kentucky Derby. It is one of the longest-running sports events in the United States and has some of the biggest parties of the year. This event is so huge that owners and jockeys will go to great lengths to pull out a win. But will they go as far as drugging their horse?

The Kentucky Derby is a horse race that is held every year in Louisville, Kentucky. It is the first of three big horse races, followed by the Preakness Stakes and Belmont Stakes. Only 13 horses have ever won all three races, a feat known as The Triple Crown. The Derby is the most bet on horse race of the year. Before the race, the odds of the horse winning are calculated, and the horses are then ranked in their places. Winning the Kentucky Derby is one of the greatest honors for any horse, owner, and jockey.

This year remarkably marked the 148th Kentucky Derby and it certainly did not disappoint. The five horses that were being closely were Zandon, Taiba, Messier, Epicenter, and Mo Donegal. These five horses were all either expected to win with 5-1 or 8-1 odds. Epicenter was expected to win, dominating in all of its previous races this year. But in a stunning turn of events, none of these horses took home the trophy. Stepping out of the dust was a horse nobody even considered. Coming in with 80-1 odds, Rich Strike passed all the other horses leaving fans, betters, and jockeys all with their jaws to the ground.

Steroids are quite a popular substance used on horses. While it is illegal for a horse to be on steroids, it still hasn’t kept many owners from still using them on their horses. The most recent case was only a year ago in the 2021 Kentucky Derby when horse Medina Spirit tested positive for 21 picograms of betamethasone. The horse owner Bob Baffert already has a reputation for using illegal substances on his horses, which is why he is facing a two-year suspension from Churchill Downs. After his horse tested positive at the Derby, he is now facing a 90-day suspension.

After watching the race this past weekend, it is quite suspicious that a horse, whose races didn’t even qualify him for the Derby, took first against some of the best racehorses in the country. Not one person would have chosen a horse with 80-1 odds. Not to mention the further fishy actions of owners Rick Dawnson and trainer Eric Reed, who both claimed that they would “never enter a horse in a race it couldn’t win,” in their post-race interview. This raises a key question: how could you have so much faith in your horse that was only an alternate? Many viewers were shocked by this response expecting both men to be stunned by the turn of events. This comment sticks in my memory because it was almost as if they knew their horse was guaranteed the win against these high-level competitors.

Another telltale sign of possible illegal substance use came moments after the race ended. As Rich Strike began to slow down and the crowd watched on in awe, Rich Strike stunned the audience once more by attacking the pony. The pony had made no visual attempts to cause this type of uproar from Rich Strike, which is why it was shocking to see this horse be so unruly and aggressive. Some might argue it was the post-race adrenaline, but in many tests done by veterinarians who work with horses, they have found this aggressive type of behavior to be one of the many signs of steroid use in horses. They also say common signs of steroid use are hyperactivity, as well as a greater tendency to approach other horses either aggressively or with enthusiasm. For anyone who watched the Derby, you could easily say that the horse showed all of these signs.

After watching the events unfold at the Derby, I think a drug test would be sufficient on Rich Strike. The odds were certainly not in favor of the horse and many actions took place after the race that made me, and I am sure many others, skeptical of Rich Strike’s miraculous win. The Kentucky Derby is an important race not only for the horse, owners, and jockeys but also for those who have serious betting money down on a certain horse. The prize for winning the Derby can also be anywhere over $1 million which is a large sum of money. With a cheating scandal like this, you are ripping horses and their whole team of many benefits, including even the possibility of going on to win the Triple Crown. Many horses and jockeys train hard for this moment and it would be irresponsible for the Derby committee if they did not test for steroid use. I truly believe that if no tests are conducted, the Derby committee should be ashamed for letting something as major as this, potentially slip carelessly through their hands.