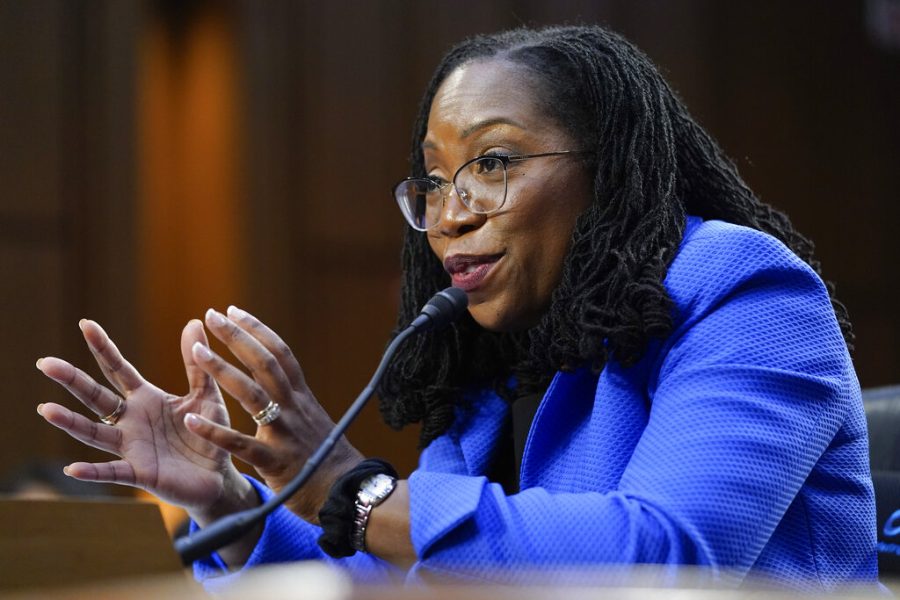 Opinions expressed in the Op/Ed section of The Knight Crier are not necessarily reflective of the views of the entire staff of the KC.

Coming out of international women’s history month, history has been made.

The vote to confirm Jackson was 53-47, with all 50 Democratic senators backing her and three rogue Republicans joining, those being Senators Susan Collins(Maine), Lisa Murkowski(Alaska), and Mitt Romney(Utah).

The fact that the vote was split so directly on party lines is simply a testament to the political stagnancy of America today. The polarization between both parties has become so severe that it seems politicians are just party robots, going with the flow of their party rather than by their own ideologies and opinions. And those that do go against that flow face the consequences of lost support from voters and the party itself.

Regardless, Jackson’s confirmation is monumental; not only is she the first black woman to be on the Supreme Court, but she is the first former public defender on the court and the first justice with experience representing impoverished criminal defendants since Justice Thurgood Marshall in the late 1900s.

Having a wide range of beliefs and ideas in the Supreme Court, such as being a public defender, is vital in its job of interpreting the constitution to uphold the law, however, diversity is never easily found in any branch of government.

The Supreme Court as a whole has lacked any kind of significant diversity ever since America was founded with the majority of the justices being old, white men. This is partly a result of their life tenure in office preventing efficient circulation of members, but also because it had been highly inaccessible for women and minorities to receive the education required to hold such a position before the past forty years. Jackson’s journey to where she is now is an inspiring one and shows that hard work and passion can get anyone to the place they want to be if they only have the courage to work for it.

Jackson attended Harvard University where she graduated in 1992 and then attended Harvard Law School where she graduated in 1996. Her record from then on is extensive where she moved up and up in the ranks, being mentored by Justice Breyer as his law clerk, as well as being the Vice Chair of the U.S. Sentencing Commission in 2009 and a district court judge later on for the U.S. District Court in Washington D.C. in 2012.

While it might have seemed that Jackson was more than qualified for the position, the confirmation process was not an easy one. During her Supreme Court confirmation hearings, she was questioned by multiple Republican senators about absurd topics that had no relevance to her nomination to the court.

Republican Senator Ted Cruz from Texas questioned Jackson about a book called “Antiracist Baby” supposedly taught in the elementary school where Jackson sits on the board of trustees. Her first response to the question was an audible sigh of disappointment.

“I have not reviewed any of those books, any of those ideas,” Jackson responded to Cruz. “They don’t come up in my work as a judge, which I am respectfully here to address.”

In true conservative fashion, Cruz also asked her about critical race theory, something many conservatives around the country seem to think is more prominent in education than it actually is.

“[Critical race theory] doesn’t come up in my work as a judge,” Jackson said, using the phrase she had to use a lot during her hearings. “It’s never something that I’ve studied or relied on, and it wouldn’t be something that I would rely on if I was on the Supreme Court.”

The hearing process from the Republican side was grueling, but on the Democratic side, the respect for Jackson was abundant.

“I know what it has taken for you to sit in that seat,” New Jersey Senator Cory Booker praised. “Today, you’re my star. You are my harbinger of hope… This country is getting better and better, and when that final vote happens, and you are sent onto the highest court in the land, I will rejoice… the United States of America will be better because of you.”

With some Republican senators throwing irrelevant questions and insults at Jackson during her confirmation hearings, and her responses being calm, collected, and coherent, she had more than proven that she has the capacity and knowledge to adequately perform her job as a Supreme Court justice

Jackson’s journey is an inspiration to every person who thinks they can’t make change because of where they come from or who they are. She worked hard to become the kind of person little girls look up to, and there is no better person to have taken up this position than her.