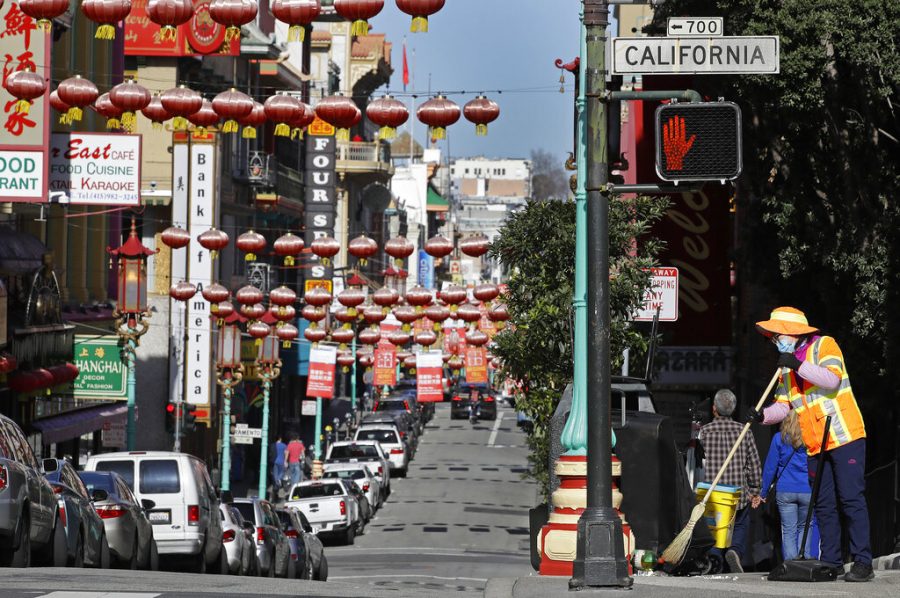 FILE - In this Jan. 31, 2020, file photo, a masked worker cleans a street in the Chinatown district in San Francisco. Police are stepping up patrol and volunteers are increasing their street presence after several violent attacks on older Asians stoked fear in the San Francisco Bay Area's Chinatowns and subdued the celebratory mood leading up to Chinese New Year. (AP Photo/Ben Margot, File)

This time of the year, Asian-Americans typically would celebrate the Lunar New Year with cheer and joy. Households across the country would welcome in the new year with their families, gathering with the people they love, sharing food, and carrying on long-standing traditions. But in 2021, the gatherings and happiness have started to feel like a forgotten practice.

Anti-Asian attacks and hate crimes have certainly been constant during COVID-19, and these attacks have been on the rise since the start of 2021.

This new wave of violence began with a notable assault of an 84-year-old Thai grandfather named Vicha Ratanapakdee. His birthday had just passed, and he had just received his COVID-19 vaccine. Going on his daily walk around his neighborhood, it was a normal day. Hours later, he was found on the street with severe brain hemorrhaging, was put into the hospital, and as a result of his injuries, died on January 30th. In that small time frame, he never regained his consciousness. On January 31st, 2 men and a woman were injured in Oakland, with police reports revealing that this was an act of violence and assault. This is in addition to more than 20 previous reported incidents of violence in Oakland. Following that, on February 3rd, there was an assault on a 61-year-old Filipino man in Manhattan, and an assault on a 64-year-old Asian woman in San Jose.

This pain and suffering should not be tolerated.

The heartbreaking events are not something new either. These are just a few recent events that have occurred, but it is becoming increasingly clear that hate crimes are happening more frequently. Even in a year spent indoors, drastic increases took place. Professor Russel Jeung (San Francisco University) and Stop AAPI Hate have said that there are over 2,800 reported cases of harassment in 2020 to Asian Americans, and in some cities like New York City, the hate crimes increased by 867%.

But to first find a solution, the root of the problem must be solved first. All of the targetings go back to the epicenter of the initial outbreak. The reason Asian Americans get attacked is that the virus outbreak started in Wuhan, China- the association between this and the people stoke xenophobic fears that are weaponized against someone who represents an Asian American. The racist ideas have sparked many dangerous incidents and made biased stigmas more prominent.

This targeting of Asian Americans has been on such a frightening growth, but what is the right solution?

In Alameda County, where Oakland resides, the District Attorney, Nancy O’Malley, announced that a special response unit to investigate crimes against Asian Americans (those elderly in particular) has been set up. President Biden also has signed an executive order to battle against the xenophobia faced by Asian American and Pacific Islander communities due to the pandemic. Each leader shows growing concern for this disturbing trend.

The hate showed toward the community and the invisibility of what’s happening both play in part of the silence.  This is not a time to act divided, but a time to act as a united front. The end goal is not only to stop these hate crimes from happening but to stop all forms of discrimination.

While this view might be overly optimistic, it has to be the end goal people need to have in their minds. These issues are issues that need to be worked on in conjunction with other issues- unified, not separated.

The way you can help can be both small and big. You can:

Report any form of hate and harassment here

Donate to a movement dedicated to educating and spreading awareness

Hate is a Virus