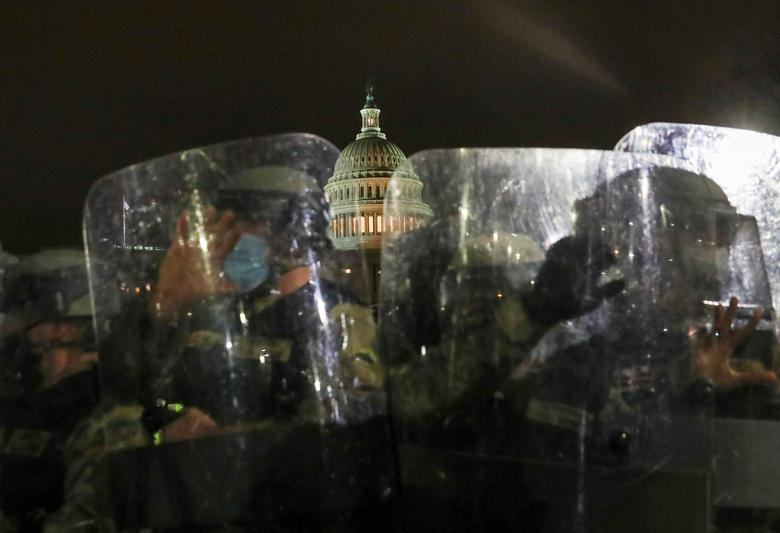 Members of the National Guard stand guard outside the Capitol Building, January 6.

On June 1st, 2020, amid the Black Lives Matter protests over the death of George Floyd, President Donald Trump ordered law enforcement officers to forcefully clear peaceful protesters in order to have a photo op in front of St. John’s church in downtown Washington D.C.

On January 6th, 2021, in the midst of counting the electoral college votes to finalize the win of President-elect Joe Biden, the US capitol was overrun by Trump supporters who were violently breaking and entering, forcing Congress members to evacuate for their own safety.

Law enforcement did not fire tear gas, shoot rubber bullets, or forcibly remove the protesters from the steps of the capital even as they were committing acts of treason.

The stark differences between these two events is a sadly accurate representation of America today. White men carrying Confederate flags with guns slung around their shoulders can breach a historical government building with little resistance whereas people of all races, genders, and backgrounds get forcibly removed while practicing their constitutional right to peacefully protest the murder of an innocent black man.

President Trump is the main reason for his supporters’ rowdy behavior as he has been actively lying to them about the count of electoral votes and Vice President Mike Pence’s nonexistent power to block the confirmation.

“I hope Mike is going to do the right thing,” President Trump said Wednesday morning at a rally outside the White House. “If Mike Pence does the right thing, we win the election.”

While Vice President Pence does not have the constitutional right to block the count, nor could Trump possibly win the election regardless, his supporters won’t accept that, and that is what makes them dangerous.

Yet, not dangerous enough for law enforcement to attack them in full riot gear it appears. Even when the protesters were wandering around the Senate floor, throwing flags out windows, and lounging in Nancy Pelosi’s office, there was nothing done to stop them.

Protesters at the Black Lives Matter marches were arrested on the spot for much less, all while being brutally harassed by members of law enforcement without cause. This happened all around the country, not only in Washington but in places like Portland, Oregon, where their National Guard was dispatched on the protesters.

Truthfully, if Wednesday were a Black Lives Matter protest, it would have been over before it even began.

President Trump’s reactions to the Black Lives Matter protests and the storming of the capital are on completely opposite sides of the spectrum as shown by his now-suspended Twitter account.

Trump referred to the Black Lives Matter protesters as “thugs” saying, “when the looting starts the shooting starts” but merely told the rioters outside the capital on Wednesday to “stay peaceful” as if they were even peaceful in the first place.

President-elect Joe Biden voiced his opinions on Wednesday afternoon, calling for the mob to disperse and for President Trump to address his supporters.

President Trump has instilled the belief in his supporters that he will continue to be the president after January 20th. And when that day comes and Trump has not sworn in again, another event like the storming of the capital will happen, hopefully with more interference from the law enforcement members who seemed so keen on shutting down Black Lives Matter protests last year.