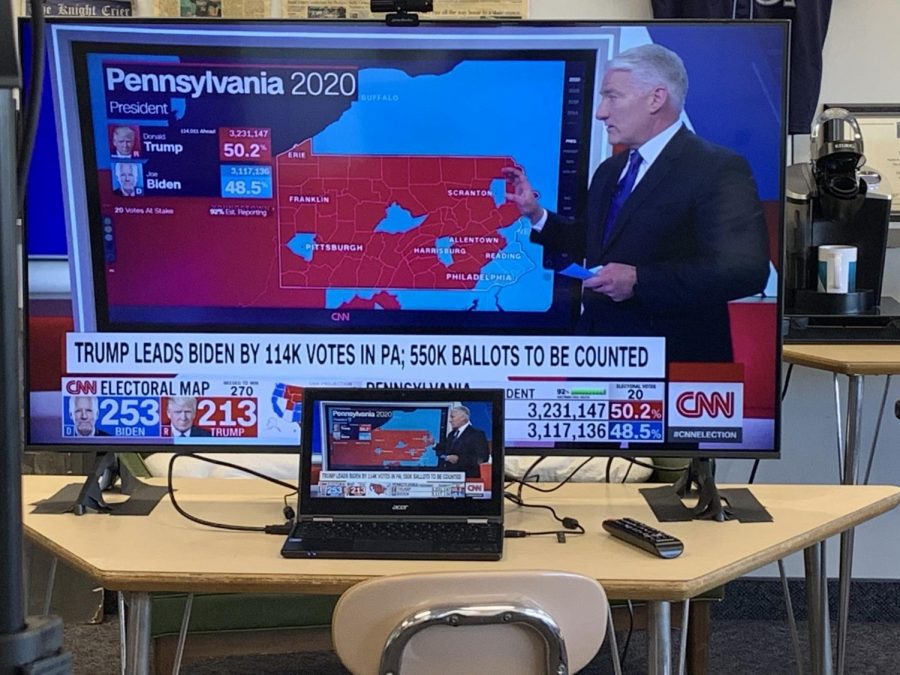 CNN anchor John King recaps the key battle ground state of Pennsylvania and breaks down how each individual county affected the state.

Everything matters, especially when it comes to your votes.

In 2020, a very important election took place on November 3rd. Our two candidates, Donald Trump and Joe Biden were rivaling. It was a very long and anxious election but on Saturday, November 7th, we found out the news that Joe Biden was elected the 46th president of the United States, with the most votes in presidential history. Kamala Harris was elected vice president as the first female, South Asian, and African American. But, until January when Inauguration day arrives, Donald Trump will remain in office.

This 2020 election’s VEP (Voting Eligible Population) was 239,247,182 United States citizens. Making the percentage turnout of VEP 66.4% to 72.1%. As you can obviously see, that is a lot of people. But, as many people as that sounds, every single vote matters. Even if you can’t vote, your voice and opinion matters. Even if somebody makes you feel as though your vote or your voice doesn’t matter– it does. It is a basic right that anyone of legal voting age and above can vote, and those votes mean something.

Some Americans feel disaffected and disconnected from the voting system. Whether you are of legal voting age, or in your last years of voting, your votes matter.

You could have voted on the ballot, or mail in this year and every single envelope and slip of paper will be or is supposed to be marked. Every person with their vote can make change happen. You could live in a small state in terms of electoral votes, but enough small states voicing their opinion together make a difference. Mature politicians cannot ignore the voice of their constituents. Your vote may not directly elect the president, but that does not mean that your vote, accompanied with other votes, cannot make a difference in who wins specific counties. In presidential election years, the primary electron garners a lower number of votes than the general election. This is because some voters wait until they have fewer choices to make their decision.

Election officials themselves also appear to be biased against minority voters, and Latinos in particular. For example, according to the Washington Post in an article entitled, “New evidence shows election officials are biased against Latino voters,” poll workers are more likely to ask minority voters for identification, including in states without voter identification laws. They may even ask more questions to the minorities. Poll workers are also more likely to ask a non-white voter for identification. But, when a poll worker recognizes a familiar face at a voting center, they are more likely to let them speed through the process of voting.

The 2020 recent election shows just how close elections can really be. In the end, Biden won by reaching the 270 electoral college votes needed, but it was a very close call. Before we found out who our new president was going to be, Biden had 253 votes and Trump had 214. Biden needed Pennsylvania to win or just Georgia, Nevada, Arizona, or North Carolina. Trump would have needed Pennsylvania’s votes and also three states out of these four states: Georgia, North Carolina, Nevada, or Arizona. Trump ended up doing a lot better than expected and Joe Biden failed to win those battleground states which count votes quickly, but the Democrat is closing the gap in crucial states as votes get counted. Out of the 50 states, there were 10 that were very close and important. That defines why an individual vote really matters because, with margins that close, a couple of hundred votes can tip in favor of a certain candidate.

Never let anybody make you feel like your vote doesn’t matter. Use your voice, and your political views to make a difference.