The Knight Crier • May 16, 2019 • https://www.knightcrier.org/opinion/2019/05/16/survivor-edge-of-extinction-excellent-concept-horrible-outcome/ 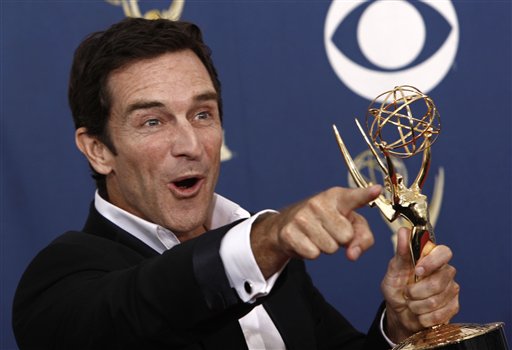 Jeff Probst poses with the award for best host for a reality or reality competition program for "Survivor" at the 61st Primetime Emmy Awards on Sunday, Sept. 20, 2009, in Los Angeles. (AP Photo/Matt Sayles)

WHAT DID I JUST WATCH?

“Survivor: Edge of Extinction” is a season that has took a significant turn from the show’s original notion. Once voted off of the main island, each individual player was given the opportunity to either end their journey or grab a torch and board a boat, bringing him or her to a separate, secluded island. As it could have been predetermined, every single player walked the torch, hoping for a second chance for the million dollar grand prize. WIth endless opportunities at stake, I went into the finale episode with an open mind, not knowing what was to come. At the end, I was happy with most of the decisions made by the players…except one decision: the winner of the season.

The final episode started with the original final five, consisting of Gavin Witson, Victoria Baamonde, Lauren O’Connell, Rick Devens, and Julie Rosenberg. At this point in the game, I had the feeling that Rick Devens had it in the bag, even though I dreaded this actually occurring. Playing a tremendous physical game, I had no doubt that he would win, or come close to winning, the final few immunity challenges. Even if he didn’t win them all, he still had the hidden immunity necklace as a backup from the episode prior, after making a risky move, exposing his possession of it to the entire tribe. These opinions were formed, disregarding the fact that the Edge of Extinction was in play. After taking this into count, my viewpoints on the possibilities changed. From a personal standpoint, the best thing that could have happened was Joe Anglim returning to the game. From the beginning, he was a strong, likable player who never got the change to fully experience the season  – and I think he had a favorable chance at beating Rick in challenges. Of course, things didn’t go my way, as Chris Underwood returned to the game after winning the challenge.

Being a well-deserved win, I was not upset that he was given another shot…well, I should say I wasn’t upset for a little while. The moment Chris pulled the hidden immunity idol out of his bad was when my emotions shifted. At this point in the game, there were only three days left, which many would argue put Chris at a major disadvantage, but I think the complete opposite happened. He entered a tense camp, with five paranoid players, not only with this hidden immunity idol, but with loads of information, which he used to save his game.

The easy vote would have been to evict him, allowing players like Victoria and Lauren to stay loyal to their alliances, but again, Chris couldn’t let that happen. Within minutes of arriving back to the main island, he went to work in establishing his safety at the next tribal council. Back at the Edge of Extinction, Kelley Wentworth, a close former ally of Lauren, told him about the idol she found. Using this knowledge, he persuaded Lauren to use it on him, in the case that Rick Devens used his, which he did. Why Lauren used her idol, I am not quite sure, but she did, saving him and sending home my favorite player, Victoria.

Left in the game at this point was Lauren, Chris, Rick, Gavin, and Julie, five players with unique game styles. The next immunity challenge would determine a lot of things: who is loyal to who, who has played a better game, etc. Taking the win, Rick secured his spot in the final four. Moments before, he located another hidden immunity idol, giving him two ways to save other players. So, safe from the vote are Chris and Rick, at the moment. Instead of wasting the idol, Rick decides to use it on Gavin, a move that changed things up quite a bit. This tribal council was a not so open book, with only two players allowed to receive votes, Lauren and Julie. For once, the vote went the way I wanted it to, sending Lauren packing. From the beginning, Lauren was someone who needed to go, in my opinion. She was too close to Kelley – close to the point where she couldn’t make her own decisions.

Here is where things get interesting. Ever since Chris returned to the island, I was almost positive that he would remain close with Rick, as they have helped each other in the past. I was mistaken….again. After winning the final immunity challenge, Chris spent the rest of the time in the game helping both Gavin and Julie practice making fire for the fire making challenge (for those who aren’t familiar with this concept – the final immunity challenge winner chooses one player to take to the final three, leaving the other two players to fight it out in a fire making challenge. The first player to make a fire tall and strong enough to burn a rope is given the final spot in the final three). Instead of picking the preeminent fire starter to face and beat Rick, the unthinkable happened.

It is the final few days in the game. It is the second to last tribal council. It is the last chance to make it to the next stage in the game. What does Chris do? He takes off the necklace, the one thing that ensures his safety, and places it around Julie’s neck. Chris makes is clear that he wants to face Devens in the fire making challenge – a bold and respectable move on his part, the move that I believe won him the game. Lucky for him, his fire catches first, putting him in the final three with Gavin and Julie, two players that have been on the main island, playing the actual game since day one.

Gavin was the clear choice…or at least I thought this was the obvious to everyone. He has been loyal to the people he has worked with. And again, he also played the game the entire season, where on the other hand, Chris was worry free for a majority of the season, as he no longer had to worry about being voted off after moving into the Edge of Extinction. Apparently, the members of the jury had a different mindset, naming Chris Underwood the winner of the million dollar prize.

Yes, with the few days he was on the island, acceptable moves were made on his part, but Gavin should have won the season. He played a strong physical, social, and mental game, which should have granted him the million dollars. Julie also played a decent game, but against both Chris and Gavin, she had no chance.

Overall, the concept of a separate island was something new and exciting for the show, but it overpowered the returning player, taking away the original feel of the Survivor. Congratulations to Chris for winning, but hopefully next season fixes the problems and loopholes the Edge of Extinction allowed.