EDITORIAL: They gave their lives. Let’s give them healthcare. 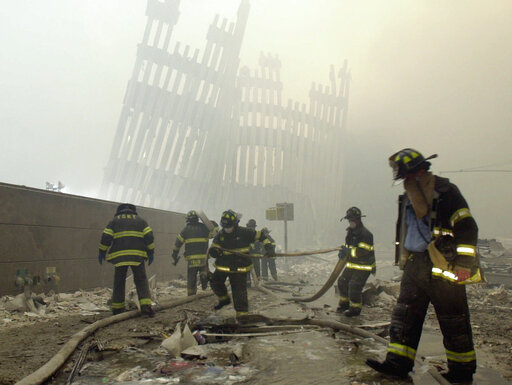 FILE - In this Sept. 11, 2001 file photo, with the skeleton of the World Trade Center twin towers in the background, New York City firefighters work amid debris on Cortlandt St. after the terrorist attacks. On Friday, Feb. 15, 2019, Rupa Bhattacharyya, the September 11th Victim Compensation Fund special master, announced that the compensation fund for victims of the Sept. 11, 2001 terror attacks will cut future payments by 50 to 70 percent because the fund is running out of money. (AP Photo/Mark Lennihan, File)

The September 11th Victim Compensation Fund is running out of money.

In other words, those heroes who literally cheated death for our country on one of the darkest days in history? Yes, there’s a chance that the government won’t help them pay for healthcare.

In 2010, Congress passed the James Zadroga 9/11 Health and Compensation Act in the aftermath of an intense and fractious political battle; this law established a fund to pay for the medical treatment of survivors and first responders who developed health problems linked to 9/11 exposure (especially cancer and asthma). Since then, the Victim Compensation Fund (VCF) has processed 47,351 claims, or applications for funding. 22,595 of these claims were approved at a cost of about $4.9 billion.

Surprisingly, American taxpayers were barely touched by the Zadroga Act because its sponsors and cosponsors devised a unique way to pay for it without raising taxes. (Be forewarned: the following information is very confusing, but I’ll try my best to explain it as clearly as possible.)

A. The government placed a 2% excise tax on countries who were not part of a procurement agreement with the United States.

This is similar to shopping at Costco or BJ’s. Members pay a fee each year for the privilege of buying the store’s products at the typical low price, but non-members have to pay extra for those same products. Under the Zadroga Act, “non-member” countries were taxed an extra 2% to conduct business with the U.S. Thank you for shopping with the American economy!

B. The government closed a corporate tax loophole.

This policy is much more straightforward – extra tax dollars collected through the closing of a loophole further offset the cost of the Zadroga Act.

So what’s the problem? In short, the VCF is drying up, and it’s slated to close in 2020 due to a lack of funds. Payoffs for approved claims have already been cut by 50%, while payoffs for new claims were cut by 70%. But help has arrived in the form of a brand-new bill (full name: “Never Forget the Heroes: Permanent Authorization of the September 11th Victim Compensation Fund Act”). Under the provisions of this bill, existing cuts will be reversed and the VCF will be fully funded through the year 2090.

In Congress, this bill was:

Opponents of both the new bill and the Zadroga Act are primarily concerned about this legislation for two reasons. Let’s break it down:

A. There isn’t enough time to hold individual hearings to prevent fraudulent allocation of money from the VCF.

This would normally be a legitimate policy problem; however, the VCF has extremely stringent vetting requirements in place that make fraud very difficult, if not impossible. To be eligible for VCF funds, one must provide the following, and more:

(This list is excerpted from the VCF’s official eligibility requirement webpage.)

Therefore, the probability that VCF funds will be misused is infinitesimally low due to intense vetting procedures and strict oversight.

B. Our country should not be held financially responsible for a crime committed against us.

Unfortunately, this is an inescapable side effect of sovereignty. Few things in life are fair – why should first responders have to physically suffer for saving lives? Furthermore, our taxes were not raised to pay for the Zadroga Act, so the vast majority of financial injury was spread uniformly among trading partners and corporations. If we were a colony or far-flung scrap of a Romanesque global empire, than yes, we could absolutely expect our parent country to cover the cost of any damages. But as a sovereign nation with healthcare and a functioning economy, we alone are responsible for using available resources to effectively maintain our own peace and security.

Our country works because of a fairly simple agreement: we pay for public services that the government is obligated to provide. When we were under attack, our first responders went the proverbial extra mile, millions of times. They gave up financial security, precious time with their children, and physical safety, allowing us to evanescently drift about our lives with bodies and spirits intact. These men and women, in essence, provided an excellent public service, and now it’s our turn to return that favor. We constructed a country on the promises of unity, integrity, and valor. To honor that legacy means to unite around those who lived these patriotic values in the service of strangers.

Out of the ashes of terror rose a well of strength and love and spirit, a bottomless reserve of the American ideals we championed as a moral victory over the evil that had tried, and failed, to defeat us. If we neglect the sacrifices of our heroes, we forget.

If we forget, do American ideals actually win?

Call your representative (202-224-3121) and ask them to support the Permanent Authorization of the September 11th Victim Compensation Fund Act.