To protect our democracy, it is more important than ever to think critically about the information we consume. 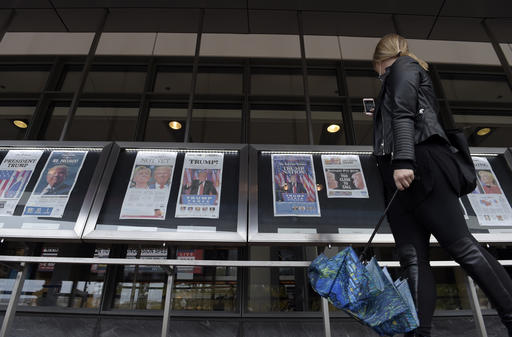 A woman views the front pages of newspapers on display outside the Newseum in Washington, Wednesday, Nov., 9, 2016, the day after the presidential election. (AP Photo/Susan Walsh)

Catherine Cavanaugh, For the Knight Crier

The American people are some of the greatest witnesses to the ever-changing media landscape. The world around us is constantly changing, and with it, the way we consume information changes. In this “iGeneration” in which we live, news is consumed through television, radio, social media, newspapers, and the internet. With all these platforms, though, it becomes difficult to distinguish the real, accurate news from the clickbait and sensationalism.

Factual and competent reports are difficult to find and trust for a number of reasons. The Hill conducted a poll finding that 72% of people believe that the news media intentionally intends to deceive the American people (Concha). With figures like this, it is important to consider why the American people feel so repulsed by the media.

To me, the answer is simple. There is a lack of trust. When the media becomes too one-sided and sensationalistic, it loses credibility. Political agendas should not be forced upon the consumer. True news media should have extremely limited biases and thoroughly researched claims. The American public is looking for a factual voice of reason, not political hacks bought out by large companies to portray each issue in an effort to further a narrative.

To add fuel to the fire, the same political figureheads continue to churn out sensationalized headlines and reports. Take, for example, Muffingate. Muffingate was a phenomenon with print journalism, podcasts, and cable news. Muffingate sprung from a Department of Justice report about spending in September of 2011. While at a law enforcement conference, a prominent government employee made a breakfast charge for a sixteen-dollar continental breakfast with the included service charge and use of private conference rooms, but that was not how it was projected by the media. According to the Huffington Post, “178 articles perpetuated the DOJ myth” of Muffingate (Stein). In all fairness to the journalistic community, there was a story with true merit within Muffingate: government officials from both the Bush and Obama administrations had used taxpayer dollars on some unnecessarily ostentatious items, but that was not true in this case. Overcharging the American people is an abuse of power that needs to be stamped out, but the journalistic obsession on calling this event “Muffingate” and attempting to call foul for a completely credible charge is absurd.

However, do not mistake my intentions. I do not hate the news media. It is an absolutely crucial part of society. Freedom of the press and the right to an informed public keep us sane. Without the press, we have the ability to fall into complete governmental control of knowledge. Without these great journalists, we may all be communicating in newspeak and ruled by Big Brother (as suggested in George Orwell’s 1984), but demanding accurate information and knowledge rooted in substance as opposed to clickbait should be a staple, not a luxury.

How We Can Fix This:

Although all of the above assertions are true, there is a need for the media. It is important to critique our media to make it better. We can love our freedom of the press and still demand that the press works with high standards for the best America possible. Left, right, or somewhere in the middle, we all understand that when rights of the media are damaged, our democracy is as well. The best way to fix issues in the media is to hold different news outlets accountable for their biases and sensationalized reporting. We are too smart to be fed false or one-sided information.