Editorial: The Cost of Living

Prescription medication costs have surged for Americans over the last several years, and the price for some is becoming too much to handle. 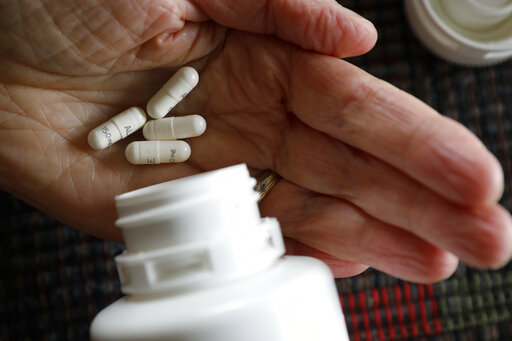 Retired public school teacher Gail Orcutt, of Altoona, Iowa, holds some of the prescription drugs she takes, Friday, Feb. 15, 2019, in Altoona, Iowa. Orcutt pays $2,600 the first month of the year, and then $750 every other month for a lung cancer medication. With health care a top issue for American voters, Congress may actually be moving toward doing something this year to address the high cost of prescription drugs. (AP Photo/Charlie Neibergall)

Whether it be yourself, a family member, or a friend, there is a good chance you know someone whose life is affected by the use of prescription drugs. Over the past few years, the price of medications for common diseases has skyrocketed, draining the bank accounts of Americans while filling the pockets of the wealthy pharmaceutical company owners. The issue isn’t just the outrageous prices of prescription medications, but the lack of moral integrity of these pharmaceutical CEOs that connect them to the many addictions, deaths, and debts to Americans.

So, how much do these everyday prescription medications cost?

Asthma, for example, is the most common chronic disease among Americans, affecting about 40 million people. Asthma can usually be controlled with the use of prescription drugs, but not many Americans can afford the price of inhalers alone or the costs of good insurance. The steroid inhaler Pulmicort retails for about $175 per inhaler, and Albuterol, one of the oldest asthma medications, can cost between $50 and $100 an inhaler, even though it only cost $15 a decade ago before it was repatented. Advair and Symbicort are two of the best-selling combination inhalers, but they cost between $250 and $350 only for a month’s supply. Asthma treatments cost Americans over $56 billion annually and result in around 3,300 deaths, many of which involve patients who skipped their medications.

Diabetes is another expensive disease that affects about ten percent of the American population (30 million people), with one-third of diabetes patients having to inject insulin on a daily basis. According to the ADA, people with diabetes spend an average of $16,752 per year on medical costs, including the cost of diabetes medication. Between 2002 and 2013, the price of insulin has tripled. Because of these extravagant costs, around 25 percent of diabetes patients have been forced to self-ration, which is when a person skips or takes a smaller dose of their medication because they can’t afford to take the required dose. When a person with diabetes self-rations, they are at risk for complications such as blindness, loss of limbs, kidney failure, and possibly death.

Allergies that require the use of an EpiPen effect an estimated 3.6 million Americans. An EpiPen is used when a person has an anaphylactic reaction, which is a severe, life-threatening allergic reaction that results in constricted breathing, hives, and/or nausea. In just nine years, the cost of a two-pack of EpiPens has skyrocketed from $94 to $600, with a price increase of $200 between 2015-16. For those who don’t have insurance, an EpiPen can cost $600 out of pocket. According to the Center for Disease Control, around 300,000 ambulatory-care visits occur per year due to food allergies for children under the age of eighteen.

ADHD is a common behavior disorder that affects 6.4 million American children ages 4-17, and 6.1 percent of these children report being treated for ADHD through the use of medication. Generic Concerta, which is a medication used to treat ADHD, can cost between $75 and $150 a month.

Generic Augmentin, one of the most common antibiotics, can cost between $80 and $120 for just a 10-day supply.

The reason Americans pay more for their prescription medications than any other developed country is because there are no rules for what a pharmaceutical company can or cannot charge. Other countries, however, bargain with their pharmaceutical companies to ensure affordable medication for their citizens. In the United States, pharmaceuticals do not look at their job as solely a way to improve the lives of Americans, but also as a way to see how much profit they can make. When demand is high for a medication, drug companies have the legal right to raise the prices for their medication, which can be seen in the prices of drugs for common illnesses such as diabetes, asthma, and depression.

In some cases, pharmaceutical companies will go to great lengths just to make a profit.

Recently, it has been exposed that Purdue Pharma and the Sackler family, who are responsible for the production of OxyContin, have been fueling the opioid epidemic while raking in billions of dollars of profit. The pharmaceutical company worked with a team of doctors to prescribe more patients OxyContin and keep them on it longer to increase profits. Since 2007, the Sackler family has received more than $4 billion in payouts from Purdue.

More than 130 Americans die each day in the United States due to a drug overdose, which totaled about 47,000 lives in 2017 alone. Since 1999, there have been around 200,000 overdose deaths due to the prescription use of OxyContin.

The majority of Americans who take prescription medications shouldn’t have to worry about facing possible health risks due to rationing, being in serious debt, or fearing that their doctors are prescribing them medicine for the wrong reasons. Americans spend an average of $1,112 on pharmaceuticals per person, which is a large gap between the next highest spender, Canada, who spends an average of $772 per person. If the U.S. spends the most on health than any other developed country, we should have access to the best medication and treatment and not have to worry about our declining life expectancy.

During a speech on May 11, 2018, President Trump announced that he is taking the initiative to lower prescription drug prices, first by reforming the Drug Discount Program.

Until medication is accessible and affordable to all Americans, we need to make an effort to fight for a more just healthcare system so no one has to fear debt or death while trying to stay healthy.