We all win when representation in Congress shifts to look more like our country. 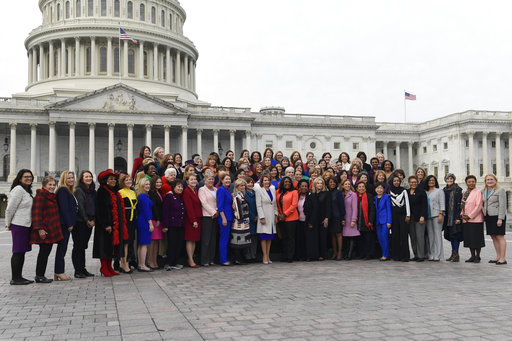 The women of the 116th Congress pose for a group photo on Capitol Hill in Washington, Friday, Jan. 4, 2019. (AP Photo/Susan Walsh)

In the past decade, the number of opportunities for women has rapidly expanded. Between sports, music, television and more, women have had more and more chances to share their voice for the world to hear. Since the past midterm elections, more women than ever before will be helping to run our country, which is a huge step for women as a whole.

The number of women involved in this new government term has skyrocketed from years before. In Congress, a whopping 117 women were either elected or appointed, compared to the 89 that were elected in 2016. The 2018 election has been compared to the 1992 election, where 28 women were elected to Congress, and many new policies were created to help women. Many women this past term were inspired to run due to Trump’s many derogatory comments toward women.

The majority of new women in Congress in 2018 were elected to the House of Representatives. Democrats elected 89 women, while Republicans elected 13 women.  Not only are there more women in the house this term, but the diversity is astonishing. At age 29, both Alexandria Ocasio-Cortez and Abby Finkenauer are the youngest women to ever win seats in Congress. Deb Haaland and Sharice Davids also made history by being the first Native American women to be elected to Congress. Rashida Tlaib and Ilhan Omar are also the first Muslim women elected to Congress.

In the Senate, the 2018 election increased the number of women serving from 23 to 25. Marsha Blackburn from Tennessee and Kyrsten Sinema from Arizona are both the first women to serve in the Senate from their states.

In 2018, there were many new seats up for grabs in Congress. 36 of these seats were filled by women. Women from both the Democratic and Republican parties ran in bigger numbers and were outperforming their male counterparts in 2018. Many running were also fighting for their first elected seat. Abigail Spanberger, a former CIA agent, and Katie Hill, a well-known lobbyist for gun control, were first-time seat winners.

Such a diverse new Congress is an extreme step for women. With more women in Congress, many issues such as abortion and equal pay will be tackled and discussed more, which could lead to the passage of bills surrounding these issues. Issues that have been stuck in Congress for years could finally get their chance in the spotlight because of this new wave.

Women have been fighting for their chance to share their voice in government since the start of this country. Now that more and more women are getting their chance to shine, you can expect an even bigger fight. Just because we have finally gotten our spots in government does not mean we are going to stop there. We as women will fight to share our opinions and what we think is right for our country. Women have been fighting so hard that who knows, this next presidential election could result in our country’s first female president.