It's time to move beyond the protests and re-posts. 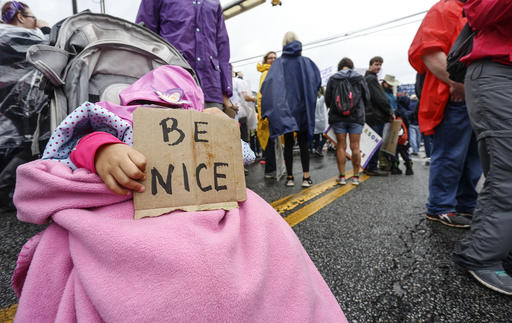 A young child in a stroller holds a sign at the Women's March on Saturday, Jan. 21, 2017, in Atlanta. The rally and march drew thousands of attendees, including , U.S. Rep. John Lewis, who had been at odds with president Donald Trump leading up to the inauguration. (AP Photo/Ron Harris)

Dr. Martin Luther King Jr. strived to achieve equality for black citizens and advocated for nonviolence in order to achieve that goal. While others relied on violence, he used the power of his words. To this day, he remains as an inspiring figure to not only black people but for activists fighting for their own rights and the rights of others.

But after all that, we only find ourselves resorting to violence in order to prove a point to the the opposing side of a controversy. We only focus on one perspective, making us ignorant. We rage and go straight to social media to vent. We dispute with others but never consider that we both may be wrong in a situation. We forget to educate others and instead coerce them into agreeing with us. We become children arguing over nonsense.

For what reason do we think this is okay? Is this true activism? How do we get people to listen and agree with us if we let our anger interfere with how we should be educating them?

Our own ignorance makes others ignorant. People will never learn unless we make them learn. Instead of educating others, we turn to venting on social media. Our venting then leads to sending out death threats when nobody, under any circumstances, deserves to have death wished upon them. If we want people to accept our own opinions, why don’t we ever make the effort to listen? Why won’t we accept the fact that we all have the right to have an opinion, even if somebody doesn’t agree with it?

It doesn’t matter how horrible someone’s opinions may be. Let them live their own life. It only makes you a hypocrite if you can’t accept that people differ in opinions because you want them to share the same opinion as you.

Change is coming. Be the better person and learn to educate rather than argue. In the end, the power of our words can actually make a difference.